Nothing's more foundational to every new building project than, well, the foundation. Before a frame ever goes up, a project has to start on sure footing. Unfortunately, most jobsites are more like building on sand than solid rock.

Some land is replete with soft silt and clay. Sites in urban areas can contain fill soil from multiple earlier builds. In both cases, a contractor must stabilize sites before construction gets off the ground. Such stabilization often involves replacing the soft soil or installing a deep foundation. But a century-old St. Louis firm has grown its business on a newer process that's more effective and efficient.

Founded in 1906, Subsurface Constructors helped pioneer the recent use of vibro stone columns to stabilize new buildings' foundations in the United States. This innovative approach has helped Subsurface grow with projects in 36 states. And amid all that growth, Doosan excavators have become integral to the process.

Mast of Their Own

Subsurface emerged from Wabash Drilling and the Smith & Brennan Pile Company. These two St. Louis companies built the foundations for most of the city's major buildings. For most of its history, the now family-owned company — led by brothers Jim and Jeff Morgan — shored up soft soil using deep foundations. That involves drilling to place piers or piles far into the ground, an oftentimes expensive process. 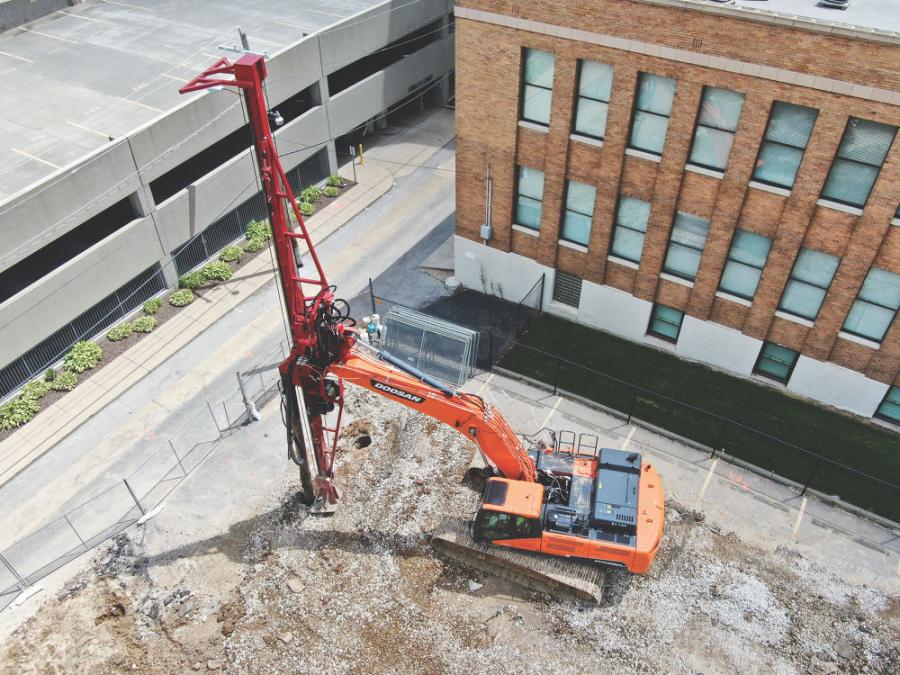 Then, nearly 100 years after the company's founding, everything shifted.

"The big change for us was about 2005, when we decided to get into ground improvement, specifically aggregate pier ground improvement," said Lyle Simonton, director of business development. "We first partnered with an overseas company to acquire equipment, but that partnership ran its course and we needed to innovate in order to grow. That's when we developed our own mast attachment."

Subsurface Constructors installs aggregate piers, also called vibro stone columns, by using a mast-mounted vibratory probe to compact stone into columns. After learning about the equipment from a company in the U.K., Subsurface became among the first companies to bring vibratory aggregate piers to the states. The firm designed its own special mast that's central to the process. As a vibratory probe on the mast is pushed into the earth, soft soil is displaced to make way for lifts of stone that are highly compacted with the probe.

And the machines that support those masts? Doosan excavators.

"Our partnership with Doosan has allowed us to take this mast that we developed, ship that mast all over the place and put it on an excavator," Simonton said.

Subsurface originally intended to affix its masts to rental units nationwide. But the scattershot availability of rental excavators prompted the company to consider an equipment company "that would allow us to be able to be responsive enough, take this equipment around the country and do this work," Simonton continued. "And that's where Doosan came in."

"When you start crunching numbers, whether it's upfront cost, maintenance cost, durability of the equipment, how long does this stuff last, upper management liked what they had seen with Doosan," Dawson said. 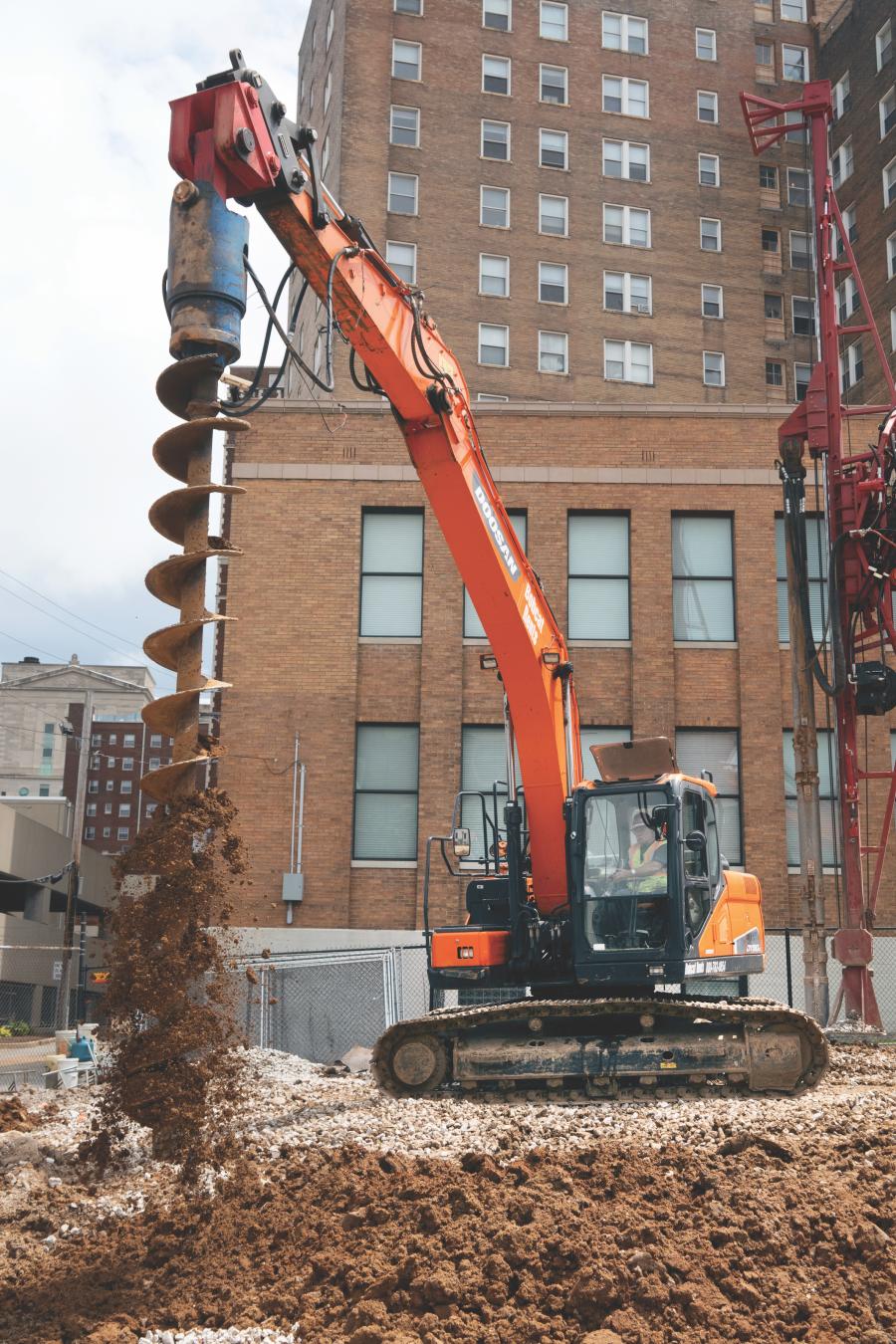 Subsurface maintains a fleet of 15 Doosan excavators. They range from the DX170LC-5 to the DX350LC-5. Subsurface's mast, once affixed, towers high over the excavator at work, which prompted Dawson's team to favor the heavier frame of the DX350LC-5. But as he crunched the numbers further, Dawson also found success using their mast on the lighter DX180LC-5 and eventually the highly transportable DX170LC-5.

"We try to run as lean as we possibly can, so if we have to have permits — oversized loads caused by a large machine — our bottom line is not going to be as good," Dawson said. "So we gave [the DX170LC-5] a shot, and now we save money on trucking."

The performance and efficiency needed for Subsurface's intense applications are all there with Doosan, according to Dawson. But the real difference-maker for him comes from inside the cabin. There, operators on Subsurface projects find the full visibility needed for their specific application.

"Now Doosan is putting cameras on the side of the machines along with the back, which I absolutely love because 90 percent of our work on making the stone columns is backward," Dawson said. "You're traveling backward as you're making them."

Other cab perks abound, he said, including the heated seat, heat and air conditioning and overall ergonomics. And the cab's quiet, too, he said.

"It's nice because I can go home and hear at the end of the day," Dawson said. "Where some equipment you run, there's a reason why operators are normally pretty deaf. So, just that aspect of ergonomics is nice."

After investing a considerable amount of money into its own mast system, Subsurface analyzed Doosan excavators to be sure they packed the power and performance to support the masts. But Murphy's law still applies, Dawson said, and anything can happen. One out-of-commission piece on one excavator can snarl a whole job site for Subsurface.

"We operate under lean, lean, lean, lean," Dawson said. "That's what makes us competitive. And when we have one link in that chain break, it's all bad. It gets expensive really quick — thousands of dollars an hour."

When that happens, Dawson doesn't hesitate to call their dealer, Gateway Dealer Network. No matter where Subsurface is working — Ohio, Pennsylvania, somewhere up the East Coast — the dealer has been able to get an excavator on a trailer and sent his way "at the drop of a hat."

"And so I'll have stuff scattered to the four winds, and if I get into a bind, they go out of their way to take care of me," he said. "That goes a long way."

Innovative approaches. Powerful machines. A reliable dealer. They're all crucial to Subsurface's success, Dawson said. And that adds up to a solid foundation.