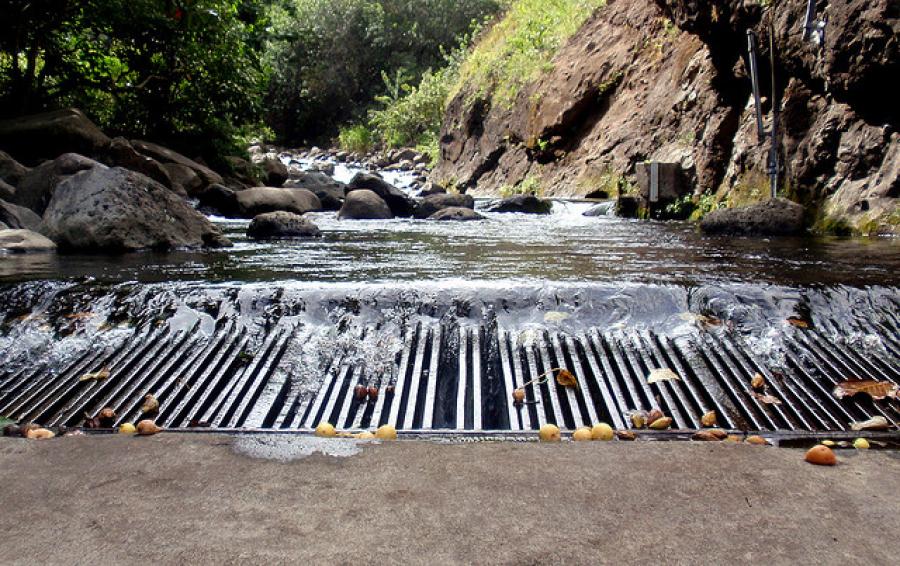 Photo courtesy Jongela19 via Flickr Creative Commons. It is said that gray water should not be used to irrigate fruit and vegetable gardens where the consumed portion of the plants rests on the ground.

Developers who want to construct buildings in Hawaii would have to install systems to re-use gray water under a bill in the Legislature.

Without those plans, they wouldn't be able to get a building permit.

The idea would be to recycle gently used water as some Hawaii residents have done for generations.

Growing up in upcountry Maui, many families had Japanese baths called “furos,' and they would let the water drain off into fields or plants, said state Sen. Clarence Nishihara, who co-introduced the bill.

“My mother's one would run off into a little patch of ginger,' Nishihara said. “It was OK, because it was soap water, right? It wasn't toilet water.'

Two Senate committees passed the bill Feb. 27. They removed a phrase that said the gray water would be used for irrigation.

The Hawaii bill is unique, and most states consider tax incentives to promote gray water systems, according to the National Conference of State Legislatures.

Critics say the bill would increase construction costs and delay building, and some are concerned the bill doesn't have enough information to ensure the recycled water will be safely used by residents.

“While the County of Maui supports the intent of this bill, we feel that there are too many (no pun intended) gray areas,' said Maui Mayor Alan Arakawa, in written testimony. “Not enough details are provided. Without details, the door is opened for inconsistencies in the way it's implemented at the County level.'

The counties would come up with their own rules for what type of gray water systems could be used, Nishihara said.

Gray water includes water from showers, sinks not located in the kitchen and washing machines that haven't been used to clean diapers, according to the state Department of Health, which issued guidelines for using gray water in 2009. Water from toilets and kitchen sinks where bacteria can be present are considered “black water' that shouldn't be recycled.

“Right now we use clean water for flushing toilets,' Nishihara said. “Maybe a better use of clean water would be irrigation.'

More can be done to reuse gray water once the state building code is updated to allow for dual plumbing systems, said Janice Okubo, spokeswoman of the Department of Health, in an email. Separate piping systems need to be installed to separate gray water from black water, she said.

Because gray water can contain fats, oils, grease, hair, lint, soaps, cleansers, fabric softeners and other chemicals, it should only be used on the property of the household from which the water came, according to the health department. That way, unsuspecting neighbors would not be exposed. They also said gray water should not be used to irrigate fruit and vegetable gardens where the consumed portion of the plants rests on the ground. —AP