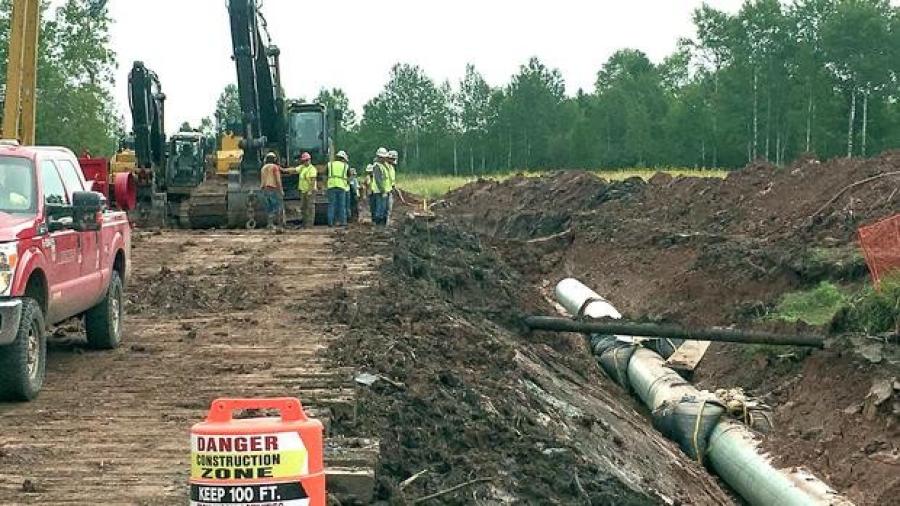 After commissioners agreed the pipeline upgrade was needed, the commission voted 3-2 in favor of a slightly modified version of Enbridge's preferred route.

All five members of the Public Utilities Commission backed the project, though some cited heavy trepidation, and a narrow majority later approved the company's preferred route despite opposition from American Indian tribes and climate change activists.

Several commissioners cited the deteriorating condition of the existing line , which was built in the 1960s, as a major factor in their decision.

“It's irrefutable that that pipeline is an accident waiting to happen,” Commissioner Dan Lipschultz said ahead of the vote. “It feels like a gun to our head … All I can say is the gun is real and it's loaded.”

Pipeline opponents reacted angrily when it became clear commissioners would approve the project. Tania Aubid, a member of the Mille Lacs Band of Ojibwe, stood and shouted, “You have just declared war on the Ojibwe!” Brent Murcia, of the group Youth Climate Intervenors, added: “We will not let this stand.”

Opponents argue that the pipeline risks spills in fragile areas in northern Minnesota, including where American Indians harvest wild rice. Ojibwe Indians, or Anishinaabe, consider wild rice sacred and central to their culture.

Others welcomed June 28's vote, including Bob Schoneberger, founder of Minnesotans for Line 3. He said Minnesota needs the line now “and will need it even more into the future.”

In a statement, Enbridge President and CEO Al Monaco said the company is “pleased” with the commission's decision.

“Replacing Line 3 is first and foremost about the safety and integrity of this critical energy infrastructure,” Monaco said.

After commissioners agreed the pipeline upgrade was needed, the commission voted 3-2 in favor of a slightly modified version of Enbridge's preferred route. The company wanted to depart from the existing pipeline to largely avoid two American Indian reservations currently crossed.

The PUC's modification does clip a portion of the Fond du Lac Band of Chippewa's land in order to avoid going close to a culturally sensitive lake. Commissioners said they would adjust the route if the band doesn't agree.

Tribal lawyers had reluctantly backed an alternative route that went much farther south as the least bad option.

After the commission's work is formalized in the next few weeks, opponents may file motions asking it to reconsider. After that, they can appeal the decision to the state Court of Appeals.

Several commissioners said the issue was difficult. Chairwoman Nancy Lange choked up and took off her glasses to wipe her eyes as she described her reasoning for approving the project. Another commissioner, Katie Sieben, said it was “so tough because there is no good outcome.”

The pipeline currently runs from Alberta, Canada, across North Dakota and Minnesota to Enbridge's terminal in Superior, Wisconsin. Enbridge has said it needs to replace the pipeline because it's increasingly subject to corrosion and cracking, and that it would continue to run Line 3 if regulators rejected its proposal.

Much of the debate has focused on whether Minnesota and Midwest refineries need the extra oil. Enbridge currently runs Line 3 at about half its original capacity of 760,000 barrels per day for safety reasons, and currently uses it only to carry light crude.

The project's opponents, including the Minnesota Department of Commerce, have argued that the refineries don't need it because demand for oil and petroleum products will fall in the coming years as people switch to electric cars and renewable energy sources. Opposition groups also argue that much of the additional oil would eventually flow to overseas buyers.

Enbridge and its customers strongly dispute the lack of need in the region . They said Line 3's reduced capacity is already forcing the company to severely ration space on its pipeline network, and that failure to restore its capacity would force oil shippers to rely more on trains and trucks, which are more expensive and less safe. Business and labor groups support the proposal for the jobs and economic stimulus.

Enbridge has already replaced the short segment of Line 3 in Wisconsin and put it into service. Construction is underway on the short segment that crosses northeastern North Dakota and on the longer section from Alberta to the U.S. border, and Enbridge plans to continue that work. Enbridge has estimated the overall cost of the project at $7.5 billion, including $2.6 billion for the U.S. segment.