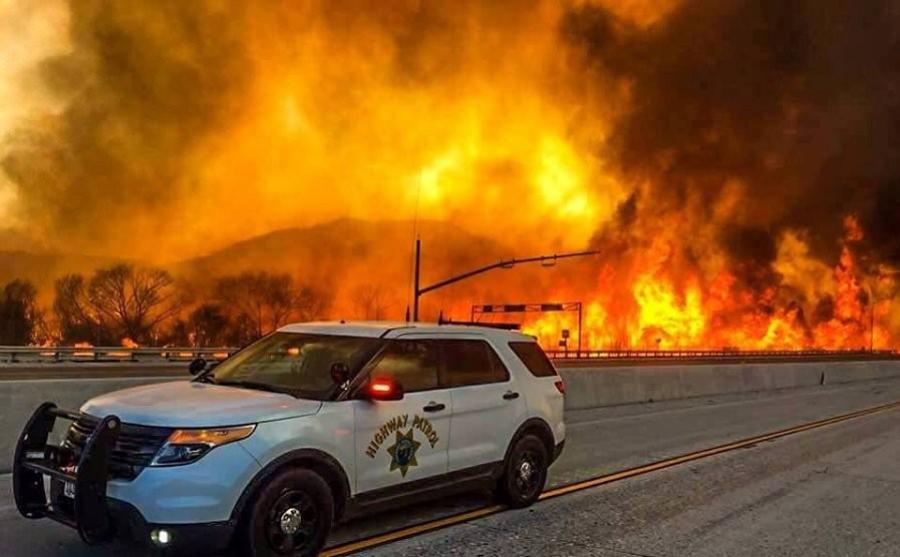 Federal emergency funding is now available for emergency work and the repair or replacement of facilities damaged by the wildfires. (California Transportation Commission Twitter photo)

The Trump administration declared on Aug. 5 that “a major disaster exists” in California as a spate of wildfires — at least 17 separate blazes covering more than 600,000 acres of land — continue to destroy private homes and transportation infrastructure, as well as causing other damage across the northern and western parts of the state.

That action makes Federal emergency funding available to state, tribal and eligible local governments and certain private nonprofit organizations on a cost-sharing basis for emergency work and the repair or replacement of facilities damaged by the wildfires.

According to Tony Tavares, chief of the maintenance division of Caltrans, the key right now is share resources and support among the agency's 12 districts from those not dealing with the wildfires with the ones that are.

Despite the “temptation” among the districts to handle fire-related needs in their areas on their own, Tavares explained in an interview with the AASHTO Journal that several of the wildfires are just so large — the Mendocino Complex Fire, for example, is now ranked as the largest in history at more than 300,000 acres — that the need for extra equipment and personnel is a forgone conclusion.

“I am communicating twice daily with my counterparts at each district, updating their situations, and relocating equipment from other districts as they need it,” he said. “We also are supporting cities and counties that need help as well.”

One example of that “equipment sharing” ethos centers on the use of what Caltrans calls its “safety vans.” Designed based on input from its front-line crews, each Caltrans district now operates a safety van that is packed with personal protective gear, supplies, pop up canopies to provide shade from the sun, tools, plus food and water to support field crews involved with traffic control, clearing road debris, and other disaster-related work.

“We relocated three of those vans from other districts to the Carr Fire alone,” Tavares said. “It also gives us an opportunity to do a 'wellness check' on our crews; they are working long shifts in hazardous conditions. Not just in terms of their physical well-being but their mental well-being, too. It's a way for us to show them that 'we've got your back.'”

Caltrans also is getting assistance from aerial drones that are checking out fire-affected areas before it sends in field crews.

“They are doing a lot of aerial reconnaissance for us; that's very helpful from a crew-safety perspective,” he noted.

The biggest concern facing Caltrans right now in terms of recovering from all of these wildfires is erosion control, Tavares explained — especially in areas below 3,000 ft. in elevation.

“Those areas are now really barren and it will take only one good thunderstorm cell to create mudslides and rockslides,” he stressed — a situation that developed in January in Santa Barbara after wildfires ravaged that area in late 2017.

“All it took was one thunderstorm to drop 2.5 inches of rain in an hour; the resulting slide [in Santa Barbara] killed people and blocked the U.S. 101 highway for two weeks,” Tavares noted. “So that's on our mind as we begin recovery efforts in the wildfire zones now.”