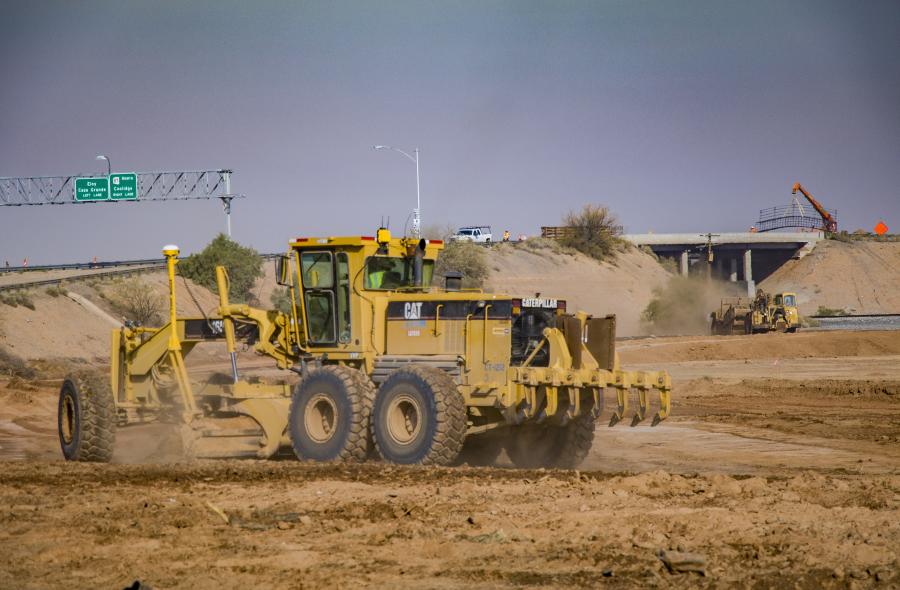 Construction is expected to last for about two years. Clearing of the site began in December 2017 and the improved highway should be ready for use in fall of 2019. (Arizona Department of Transportation photo)

A warning system for dust storms — a hazard for motorists in windy parts of America's Desert Southwest — is being built in southern Arizona.

Detection of strong winds, along with warnings of possible whiteout conditions and potential vehicle damage from blowing dust and sand are part of a $58.6 million Interstate 10 widening project south of Phoenix and north of Tucson, near Picacho, Ariz.

The dust detection system and warning zone is the first of its type in the nation. While dust detection equipment is being set up, a 4-mi. stretch of highway will be realigned and widened to three lanes in each direction. Previously, the highway featured two lanes each way.

Construction is expected to last for about two years. Clearing of the site began in December 2017 and the improved highway should be ready for use in fall of 2019.

The project is unique in addressing blowing dust, a serious problem that can hinder vision and make driving hazardous on windy days in the desert. Dust and sand also can damage car windows. Dust storms carry small rocks and other materials that can crack or chip the windshield. They are the third largest cause of weather fatalities in the state over the last 50 years, according to a report published in 2016 by meteorologists with the National Weather Service and a University of Arizona atmospheric sciences researcher. Fatalities from extreme heat or cold rank first and flash flooding is second, according to the report.

Crews will set up a dust-detection and warning zone designed to alert drivers to dangerous conditions in an area prone to blowing dust.

“This project includes two elements that will enhance safety for those using this busy section of Interstate 10,” said John Halikowski, ADOT director in a release. “The innovative dust detection project will provide drivers with fast information when conditions warrant.”

Halikowski added that adding a lane in each direction on I-10 will allow traffic to move more smoothly through a key commerce corridor.

The project includes widening of I-10 from milepost 209 to 213 and realigning the freeway to remove an S curve. Construction crews also will build a new interchange at I-10 and state Route 87. It will carry SR 87 over the Union Pacific Railroad tracks.

Initial work on the 4-mi. stretch of I-10 included clearing land for work that will shift I-10 to a straighter path about 500 ft. north of its current alignment.

The work is funded in part by a $54 million federal grant that also will help pay for a second, I-10 widening project 4 mi. north of Interstate 8 in Casa Grande. When the two projects are finished, I-10 will provide three lanes in each direction between Casa Grande and Tucson.

Coffman Specialties Inc. of San Diego won a $58.4 million contract for the first project. Coffman is owned by women and is an enterprise specializing in the construction of large public and governmental projects. Since its founding in 1991, the company has completed nearly 100 major highway, airfield and waterway projects, focusing on cement treated pavements, mass excavation, structural concrete of all types, bridges and other complex infrastructure.

About 12 subcontractors have been selected for the project. Major subs include Sturgeon Electric of Henderson, Colo.; Horizontal Boring LLC of Laveen Village, Ariz.; and Tee Pee Contractors of Casa Grande, Ariz., for pipe installation.

Between 50 and 60 workers on the job daily at the construction site.

Current work includes finishing clearing of the project site in preparation of widening the highway. Crews also are installing piers that will support the traffic interchange with SR 87.

A second widening project is planned for I-10, about 10 mi. north of the first, at milepost 196-200, between Casa Grande and Tucson, Ariz.

It includes constructing an interchange and adding one lane in each direction in the current median, adding a concrete median and replacing the bridge over Jimmie Kerr Boulevards at milepost 199.

Work on the second project was expected to start in early April 2018 and continue to summer of 2019.

Interstate 10 is a key commerce corridor. It connects the two largest cities and metropolitan areas in Arizona, Phoenix and Tucson. It is a vital route for Arizona residents travelling between the two largest regions in our state. Widening the freeway to six lanes in this area will promote improved traffic flow and safety.

The dust detection zone is the first of its kind in the nation. 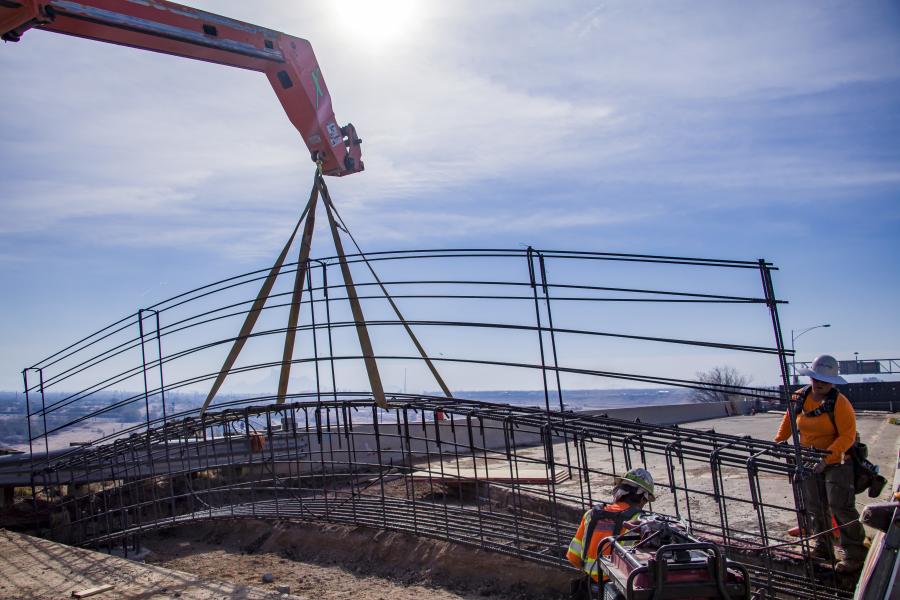 It includes two types of radar to detect blowing dust along the freeway and the distance approaching I-10. Short-range detectors will be located every mile, as well as half-mile increments in the center of the area.

The long-range detector will be located at the north end of the construction area, away from Newman and Picacho peaks.

Electronic message boards will be placed at each end of the dust detection zone and in the center. They will provide messages visible to drivers travelling in both directions. 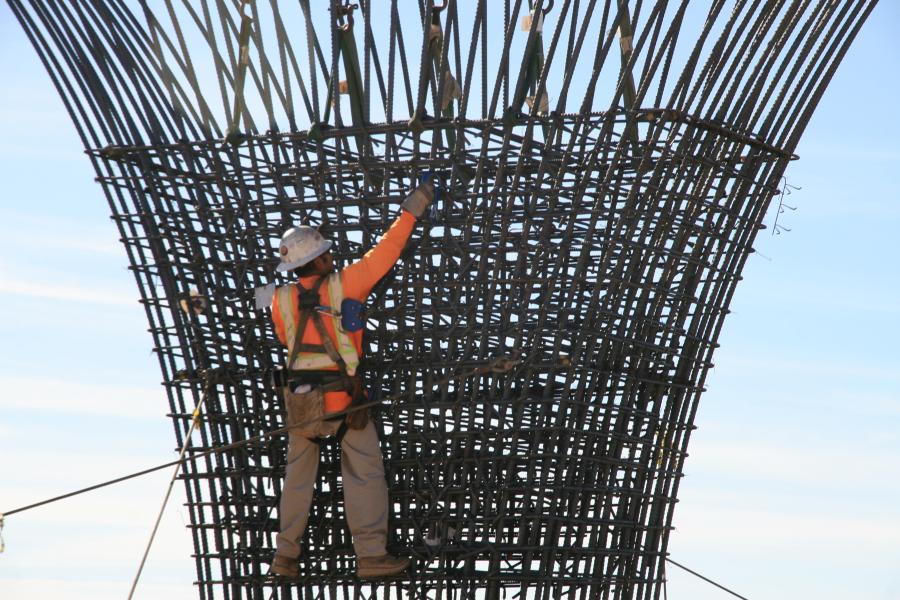 Closed-circuit freeway cameras will be set up so Arizona Department of Transportation traffic operators in Phoenix can view driving conditions in real time. Electronic message boards will relay information about wind and driving conditions. The closed-circuit cameras will eventually be made available for public viewing on ADOT's traveler information website and for use by media in the Phoenix and Tucson areas.

Short-range radar detection equipment detection equipment, manufactured by Vaisala, a radar equipment manufacturer based in Helsinki, Finland, will be placed on poles at each mile throughout the dust detection zone, as well as every half mile between mileposts 212 and 214 — the area where historically most dust-related crashes have occurred. They will identify visibility based on dust particles in the air. They are accurate as much as one mile.

Long-range radar equipment will be housed inside a radome — a dome that protects equipment and is generally made of material that allows radio waves to pass through — and located at the north end of the project to avoid potential interference from Newman and Picacho peaks. The peaks are located near the south end of the project.

The radar, which can look 30 mi. and more into the desert, will primarily be used to identify blowing dust 3 to 5 mi. from the freeway and approaching as a possible dust storm on I-10.

Arizona Department of Transportation reports that dust storms, most common during the summer monsoon season, can occur year-round in desert areas. And localized winds can create dust channels that severely reduce visibility in a small area.

California also has had problems with dust storms, especially in desert areas like Palm Springs and in the San Joaquin Valley. But the storms are considered rare. When they do begin to kick up, various weather services including the National Weather Service issue a warning. But the weather warning system is less localized than the dust detection project.

The I-10 widening and dust detection project could provide some economic benefits to the area. I-10 is a vital route for commercial traffic, not only in Arizona, but nationwide along I-10 between California and Texas and beyond. Billions of dollars in imports from Mexico enter the United States in Arizona, move north on Interstate 19 to Tucson and then across the country on I-10.

“Improvements to I-10 that improve safety and traffic flow, without question will create economic growth in Arizona as more commercial and resident traffic uses I-10,” said Tom Herrmann, public information officer for Arizona Department of Transportation. “In addition, Maricopa County is the fastest -growing county in the United States, making widening this vital corridor even more important.”