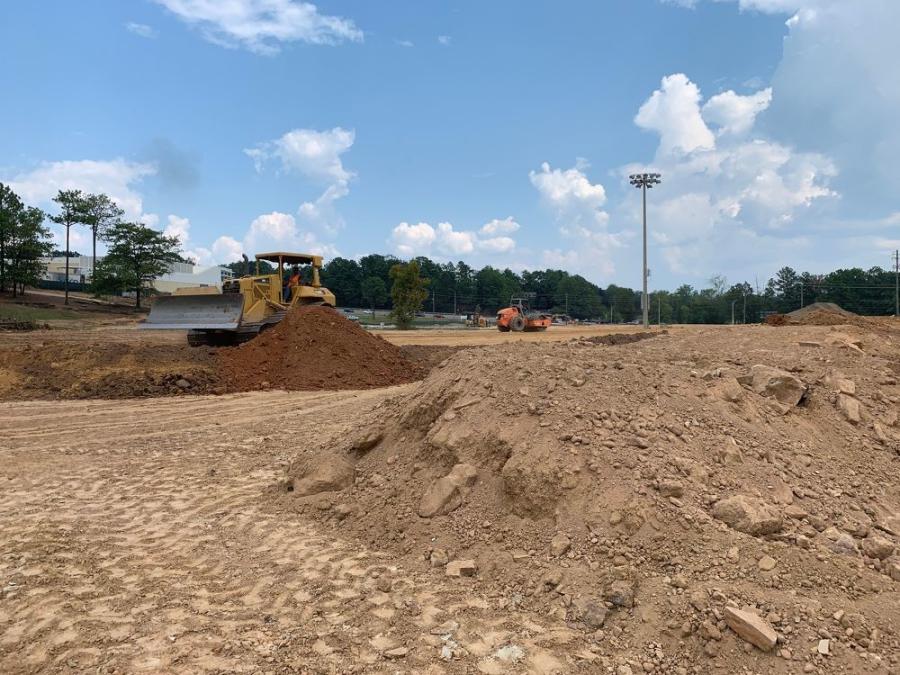 More than 7,500 cu. yds. of dirt/material will be moved on the project. Excess dirt from another location was used to level the park.

As part of a larger vision, Alabama construction crews are working on a project that will completely change the landscape of U.S. Highway 31 in the Birmingham suburb of Vestavia Hills. Renovations to Wald Park include two new swimming pools, tennis courts and green space, as well as upgrades to ball fields, a dog park and the addition of Miracle Fields — the first parks and recreation space in the city created to accommodate children with special needs.

"Wald Park has served as a hub for Vestavia citizens for decades but has not seen any major capital improvements in many years," said Cinnamon McCulley, city of Vestavia Hills spokesperson. "The bulk of the park amenities are far past their useful life and are in desperate need of renovation/rebuilding to ensure they can continue to serve the citizens of Vestavia Hills for years to come."

Built decades ago, Wald Park is considered long overdue for its $21 million upgrade.

"Fields have settled, irrigation is failing and capacity needs have increased dramatically. Based on its state of disrepair, it is evident that despite our best efforts, the park will continue to deteriorate at faster rates." 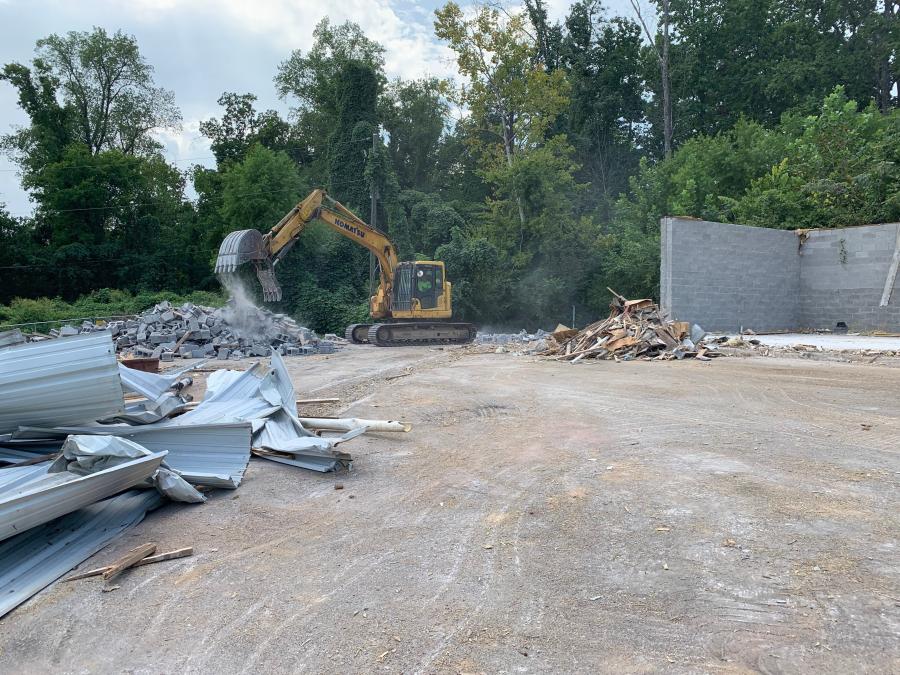 McCulley said efforts to continually improve the existing amenities would result in money being spent to maintain assets that have seen better days. Life cycle cost was taken into consideration, and over time, building new or completely renovating was determined to be less costly. Organizers believe the city's Wald Park project will attract attention to its investment into the community for all citizens.

"Overall, the reaction from the community to the planned improvements has been very positive," said McCulley, who noted that construction will have little effect on motorists, as only a few minor improvements to intersections are planned to benefit drivers using the new amenities.

Keeping everyone informed of what's happening has been a priority from day one.

"The city has continually communicated construction plans, as well as any road closures, detours, etc. with residents throughout this process. The most significant effect is that the park will be completely closed to residents for approximately 12 months, resulting in various logistical changes for families participating in activities.

"City officials, along with program manager TCU, conducted nearly 30 public involvement meetings in the months leading up to planning for the ultimate changes. These meetings allowed for community members, business leaders and various other stakeholders to provide input."

McCulley said the Wald Park changes tie in to a broader plan for the city.

"Wald Park is one of many projects that are a part of the overall Community Spaces Plan," she said. "This $58 million plan includes infrastructure and amenity improvements throughout Vestavia Hills, involving Wald Park, Cahaba Heights Athletic Complex, sidewalks, road paving and a new community center."

Although work won't take place for a while, Gold's Gym will be transformed into a new community center adjacent to city hall. The space will be used for recreational activities, meeting spaces and senior activities. The design is still in progress. In addition to older recreational amenities, Vestavia Hills also has aging infrastructure that must be addressed, in addition to other changes being made or on the horizon.

McCulley said the Wald Park project has been in the works for a while, requiring funding and a sustainable plan before making it a reality.

"City staff and elected officials have been working toward the onset of this project since 2015," she said. "We are all very excited to see it underway and look forward to delivering these recreational and quality of life amenity improvements to the residents of Vestavia Hills."

Taylor Miree Construction was awarded the construction contract. According to project manager Raynor Boles of TCU Consulting Services, there have been challenges to address during construction.

"These include logistical concerns of displacing something community members have had for so long," Boles explained. "Also, the changes in elevation and rock have led to more difficult site conditions." 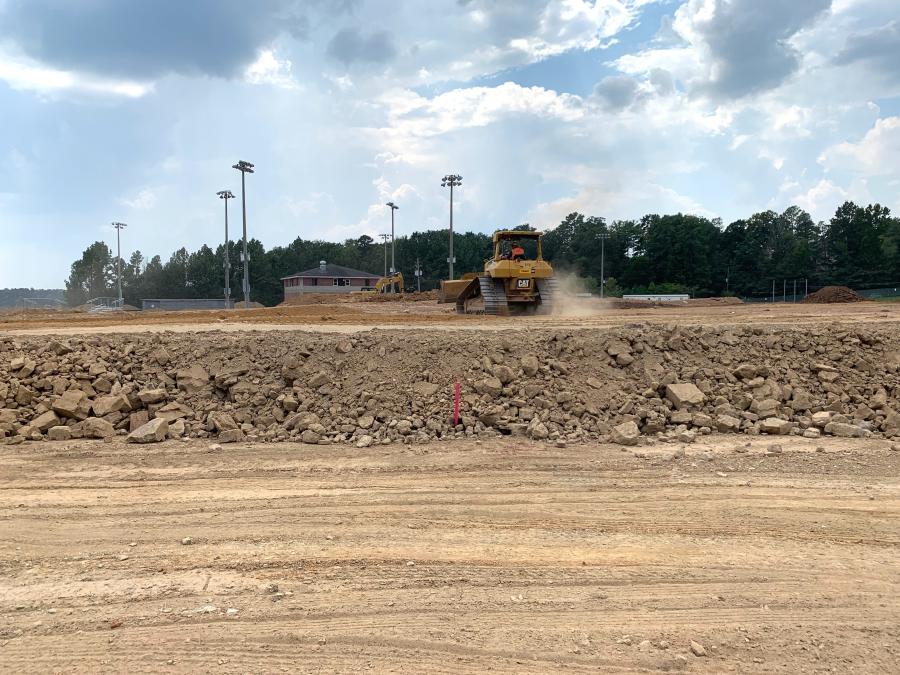 Work on the project began in October 2018 and is expected to be completed by August 2020.

Demolition has been ongoing. Crews have also been focusing on mass grading, site clearing and pool foundations. A tremendous amount of earth has been moved over the past several months, and the park is expected to take shape soon as crews dig out the pool area and clear and grade the dog park.

Key tasks yet to be carried out include vertical pool construction, fields that must be stripped and redone, new lighting, mass grading, renovations to the existing concession building and Miracle Field construction.

More than 7,500 cu. yds. of dirt/material will be moved on the project. Excess dirt from another location was used to level the park.

"We had major excavation from the now Baumhower's Victory Grille and Dunkin Donuts site into the previous Exchange Field site," Boles said. "We are also excavating the west end of the park and bringing it down, using the dirt to fill in other parts of Wald Park."

"There's lots of land, lots of dirt and major areas of overgrowth," he said.

Significant rain was a major factor during the fall and winter of 2018-2019, but weather is not posing a threat to construction right now.

As for the main priorities when working on a project of this nature, said Boles: "We don't have any major concerns outside of standard construction practices, but our priorities include safety and security around the school adjacent to the construction site, the reopening of pool and baseball fields for use and reopening play areas for school."

Incorporated in 1950, Vestavia Hills is a suburban community with four sections that include Vestavia, Cahaba Heights, Liberty Park and Patchwork Farms. The city has its own public school system with one high school, two middle schools and five elementary schools. Vestavia Hills has a population of roughly 34,000, according to the city's website. It is located in Jefferson County, along U.S. 31, I-65 and U.S. 280. CEG