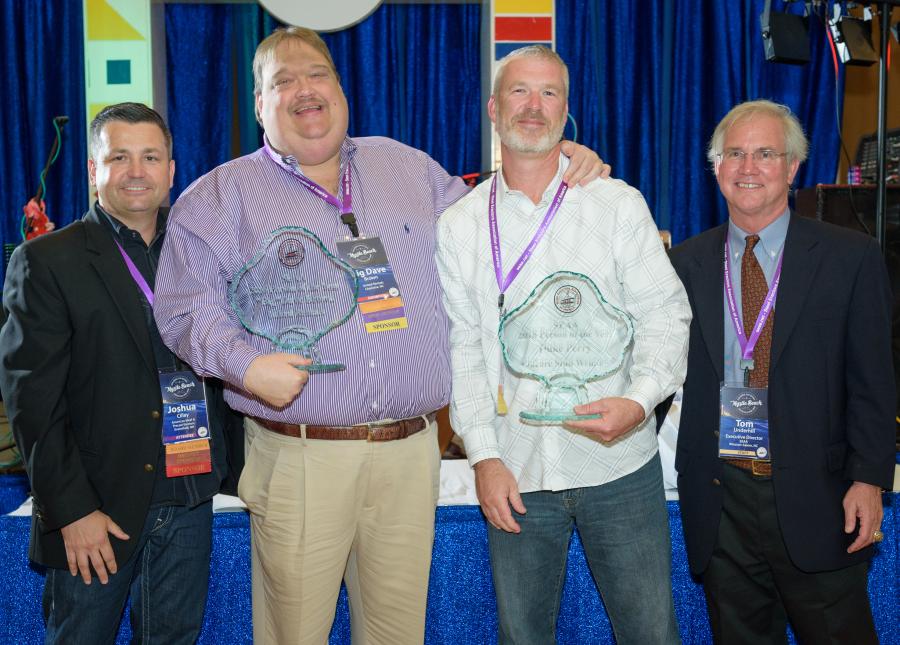 The Steel Erectors Association of America announced that two individuals have received the 2017 Person of the Year award. They are Duke Perry, general manager of Bluearc Stud Welding, Braselton, Ga., and Dave Brown Sr., regional sales manager of the southeast region of United Rentals.

The awards were given during the 45th Annual Convention and Tradeshow in Myrtle Beach, S.C. Both individuals represent suppliers to the industry — a manufacturer weld studs, stud welding equipment and accessories, and a lifting equipment rental company — an indication of the value steel erectors and fabricators place on their relationships with product and service providers. For the first time, the SEAA board of directors vote ended in a tie, the reason for two awards.

Perry, a second generation welding expert, advises manufacturing and production of weld studs for the construction industry and leads sales and marketing for the product line. His company has been a member of SEAA since 2010, and he has served multiple terms on the SEAA board of directors.

“Described by others as a quiet, compassionate and unassuming individual, Duke is a hard worker, willing to help behind the scenes for SEAA events and programs,” said Alan Sears, master of ceremonies. Perry's efforts on the convention committee contributed to the success of this year's event, according to the association.

Geoff Kress, vice president of Gardner-Watson Decking, who has done business with Perry said, “His industry knowledge, integrity, and work ethic are his biggest assets. When we have had conversations about steel decking and stud welding, we always end up talking about SEAA.”

Brown has worked in equipment rental for many years, and United Rentals has been a member of SEAA for nearly two decades. Brown currently is serving his second term on the board of directors. Known by his friends as “Big” Dave, for his big ideas, big heart and boisterous personality, Brown doesn't hesitate to offer an opinion and often outside-the-box thinking.

Described by many as a generous individual, Brown “willingly volunteers his time, ideas, contacts and money to promote and advance SEAA projects. He thinks big,” said Eddie Williams, chairman of Buckner Companies.

One of his most successful schemes is the Boom Lift Ball Drop, which has become a favorite activity and fundraiser for the SEAA education committee, providing seed money for the launch of the Ironworker Craft Training and Apprenticeship Program. At this year's convention he also spearheaded a silent auction, supported by Trade Show vendors. Together, these two big ideas have generated more than $10,000 to support education programming and grants.