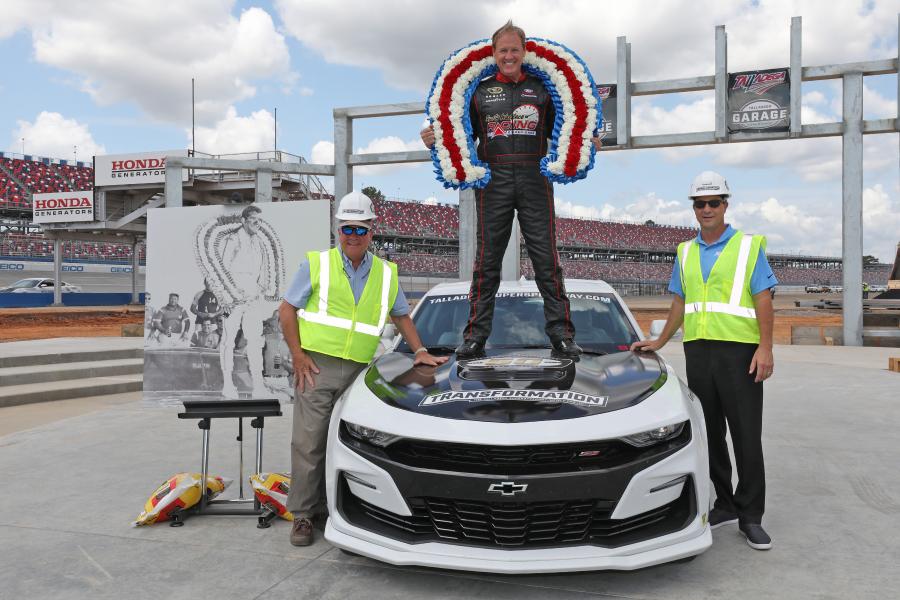 A $50 million redevelopment project is currently under way at the Talladega Superspeedway in Alabama. The result will be new attractions and enhanced amenities for fans, sponsor teams and stakeholders at the world-famous racetrack's infield.

Known as "Transformation — The Talladega Superspeedway Infield Project by Graybar," the project has consisted of two phases. According to Russell Branham, director of public relations and consumer marketing for Talladega Superspeedway, Phase 1 began in October 2018 and concluded during the track's spring 2019 weekend at the end of April.

Phase 1 consisted of a new "Finish Line Premium RV" lot, complete with full hookups, as well as the Turn 3 oversized vehicle tunnel that allows recreational vehicles and team haulers access to the track 24/7 during race week. Phase 2 of the project began immediately after the checkered flag of the GEICO 500 on April 28, 2019. 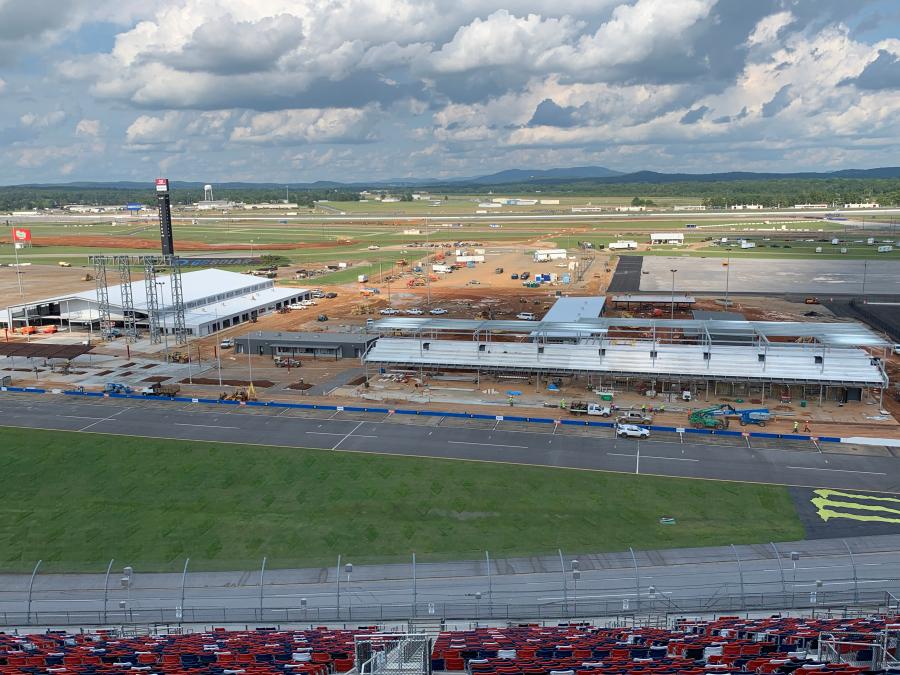 "Actually, a lot of prep work began earlier than that, but officially work began on the 28th and then in full force the following day of April 29," Branham clarified. "Phase 2 includes a host of items headlined by the Talladega Garage Experience, which will allow fans to be immersed into the sport of NASCAR and the sport's most competitive venue like never before with 140,000 sq. ft. of social areas."

Branham explained that the Transformation Infield Project is part of International Speedway Corporation's (Talladega's parent company) long-term capital allocation plan and reinvestment into its major motorsports complexes. DLR Group is the architect of the entire project while Hoar Construction of Birmingham, Ala., continues to lead Phase 2.

GT Grandstands of Plant City, Fla., is constructing the Race Operations tower, as well as the Pit Road Club Suites that will house 600 guests who will get a birds-eye view of team pit stops from behind pit road, along with food and beverages. Gary Merriman is the senior superintendent of Hoar Construction and Grant Lynch, chairman of Talladega Superspeedway, is the lead from a track standpoint.

For Phase 2, Branham noted that the amount of time to build the project (four months) is the biggest challenge. 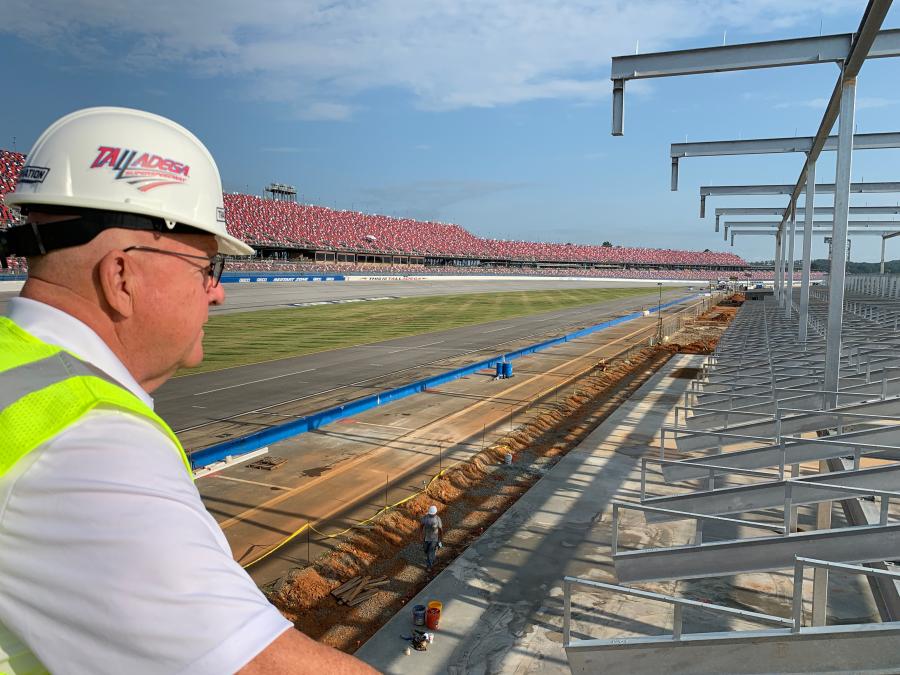 "It's a NASCAR venue — one of the legendary tracks in all of motorsports and sports in general," he said. "It is celebrating its 50th anniversary this year, so lots of eyes on the track in addition to the project. The track hosts two NASCAR weekends a year so they have to do the construction in and around those event weekends."

Branham explained that the centerpiece of the Talladega Garage Experience is the massive 35,000 sq. ft. Open Air Club that will be lined on both sides by two of the four Monster Energy NASCAR Cup Series (MENCS) garages, which house the top 22 drivers (11 in each) in the Cup Series.

In the garage bays via the fan viewing walkway, guests with Garage Experience admission will receive "up-close" access under the same roof where cars are being prepped by the race teams throughout the entire weekend.

"Shade structures are also up throughout and in place and will serve as great locations for fans to congregate, enjoy the $4 or less value-priced concessions (excluding the $9 Big One Meatball), and catch all the live on-track action via the giant ISM Vision Board screen right outside the Social Club, perfect for all fans' viewing purposes," Braham said.

Other amenities to enjoy include a reserved area at Gatorade Victory Lane where fans will get the chance to witness the victors' celebration after each race in Celebration Plaza, an entertainment stage for local music, driver Q&As and other interviews and social areas — a Watch Zone, Game Zone, Pit Road Club suites, concession and restroom complexes, Garage Suites and Guest Services. 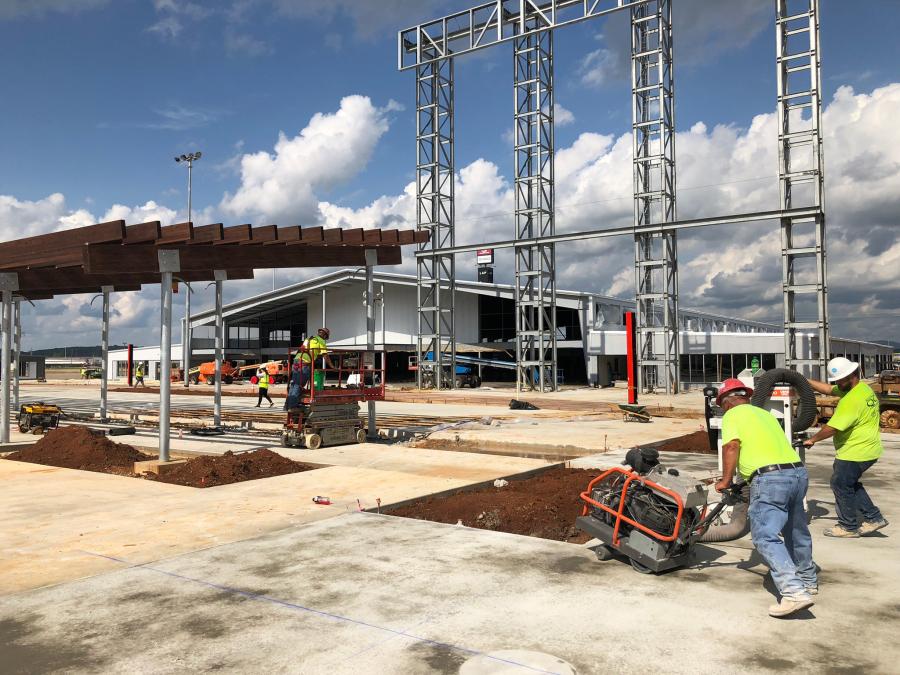 Phase 2 will include 44 new garage stalls (a total of four garages with 11 bays in each), four 25-person garage suites with views into the MENCS garages and four garage offices available for rent inside the MENCS garage. The existing MENCS garage will become the NASCAR Gander Outdoors Truck Series (NGOTS) garage area this fall and will be servicing the NASCAR Xfinity Series (NXS) next spring. A fan walkway inside the garages will allow fans to see the race cars being prepared for competition up close.

Nearly 140,000 sq. ft. of open space in the new infield fan area (excluding all buildings) will be utilized for sponsorship display, concessions carts, seating and landscaped green space. Two new concession stands will be added, as well as a Kids Zone and Game Zone. Other additions will be an entertainment stage for driver/personality Fan Q&As, as well as musical entertainment; a merchandise area; two new restrooms; a guest services center and a fan first aid facility.

A Pit Road Club will have approximate seating capacity for 600 consumers and corporate guests. There will be two open-air levels, featuring hospitality on the first level and tiered stadium seating on the second level. An overhead canopy will offer protection from rain and sun. A covered ground floor seating and lounge area will be 19,000 sq. ft. 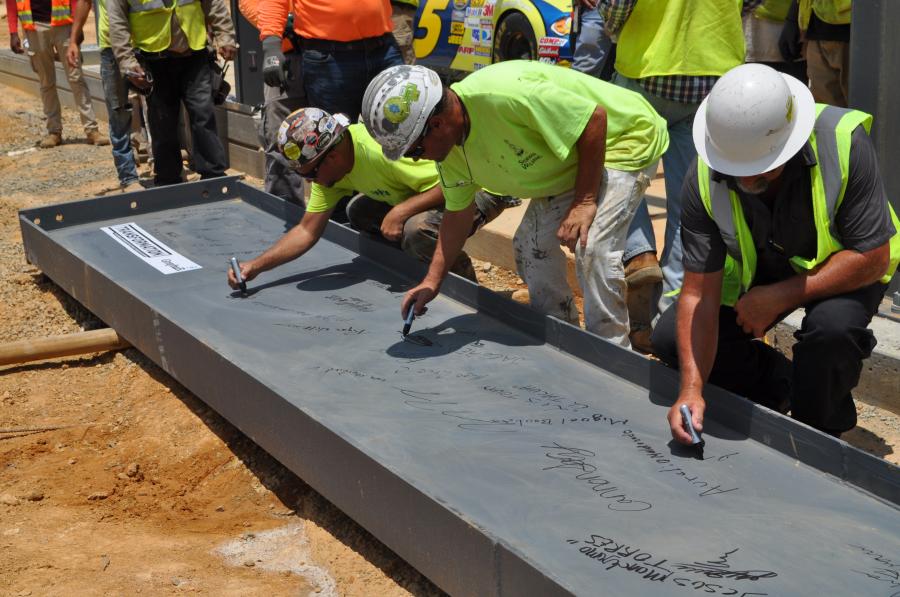 Also planned are a renovated Media Center Annex with approximately 230 workstations for media, photographers and team representatives and five radio/interview rooms. Public relations staff/photographers will have a separate building to the main media center, but the two will be connected by a covered pavilion area.

In totality, the project encompasses 6,000 cu. yds. of concrete, 210 tons of steel and enough conduit to make three laps around the track.

Equipment used on the job is varied. "You name it, it's been used," Braham said.

Construction of the 2,000-acre Alabama International Motor Speedway began on May 23, 1968. The first event held there was the ‘Bama 400 Grand Touring race on Sept. 13, 1969, won by Ken Rush in a Camaro. The track became known as the Talladega Superspeedway in 1989.

Fans can learn more about the project and view the progress 24/7 via the construction cam by visiting www.talladegasuperspeedway.com/transformation. CEG