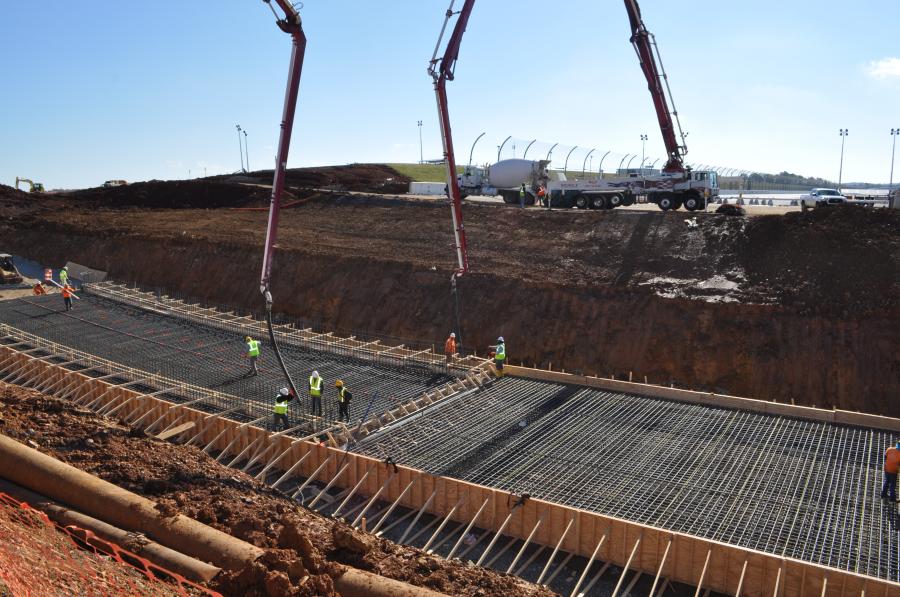 The first task for crews working on Phase 1 of the Talladega Speedway Transformation project involved completion of an oversized, two-lane vehicle tunnel.

In Talladega, Ala., the race is on to complete the first phase of a roughly $50 million Transformation infield project that's part of a long-term reinvestment in the famed motorsports complex. The highly anticipated results will include interactive attractions and enhanced amenities for fans, sponsors, teams and stakeholders.

"We've had such a great history here at Talladega, and next year we will celebrate our 50th anniversary," said Grant Lynch, chairman, Talladega Superspeedway. "Throughout these 50 years, we have seen the greatest racing on the planet. But when looking to the future, we asked ourselves, what do we need to do to take this historical place to the next level, to attract new fans? Transformation is designed to allow families up-close access and to be immersed in the sport like never before."

The first task for crews involves completing an oversized, two-lane vehicle tunnel. Weighing 3.2 million lbs., it will be more than 200 ft. long and 28 ft. wide, with a clearance height inside of 16 ft., 8 in. Once it is finished, enough sheet waterproofing will have been applied to cover an entire football field.

The tunnel, which is scheduled for completion in time for the track's spring motorsports tripleheader weekend, April 26 to 28, 2019, will allow race team haulers, fans' recreational vehicles and track tram vehicles to enter and exit the track simultaneously. It will be open 24 hours during event weekends.

"This is something we've wanted for our fans a long time," said Lynch. "Fans who come from near and far will now be able to drive in and out of the facility throughout a race weekend with their motorhomes. Before, we have only had a crossover gate, and if they came when the track had race cars or race trucks on it, they would have to be staged outside of the venue until the track was clear. Sometimes that could mean waiting for 10 hours, as the track was occupied.

"For years, our fans have asked for this, and we are happy for them. It's going to make our race track so much more accessible. We broke ground in October, and to see how fast things are coming along is amazing. All of our staff can't wait to showcase this state-of-the-art tunnel." 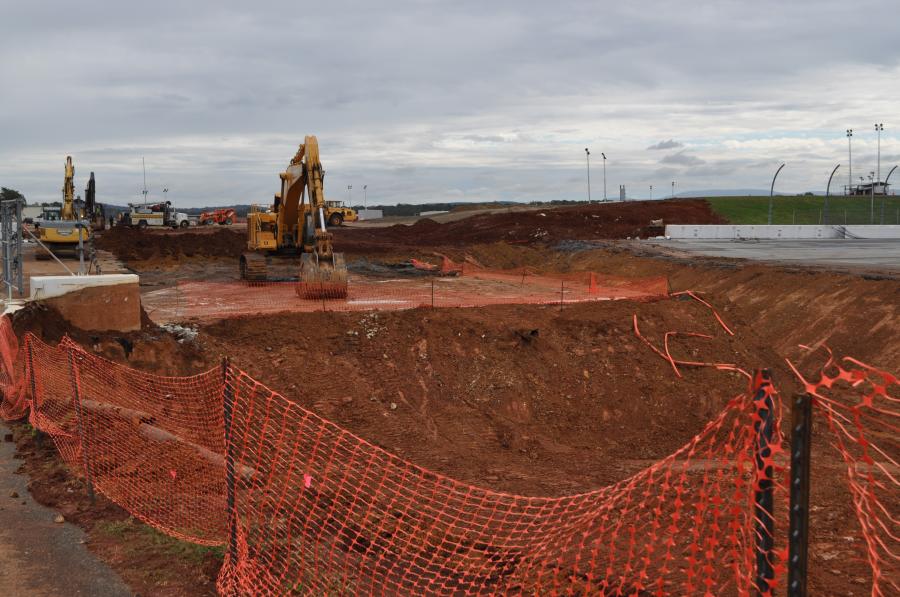 "Fans will be able to walk under the same roof, just feet away, that Jimmie Johnson's race car is under in the garage, as his team works on the machine," he added. "And the same for Kyle Busch, Joey Logano and all of the top stars of NASCAR. It will be unparalleled accessibility, coupled with 140 square feet of social and engagement areas, along with interactive attractions, a 35,000-square-foot, covered, open-air club, social areas, a new Gatorade victory lane and concession stands.

"Work began just a week after our October NASCAR race weekend on the tunnel. We have construction teams working night and day to make sure the tunnel, which is a key part of Transformation, is ready to go for our fans. In addition to the tunnel, we will also have our new 67-spot finish line premium RV area ready in the spring, all with hookups for power, water and sewer. We have so much going on, that it has to be split into two phases."

Said Lynch, "We will begin work on other items at the beginning of the new year also, but the finished results of those endeavors won't occur until our fall October NASCAR Playoff race weekend. After the checkered flag falls in April, then we will be in wide-open mode to complete the biggest part of Transformation, which is our ‘Garage Fan Zone Experience.' "

Racing enthusiasts are reportedly thrilled with the renovations.

"We are getting countless calls, wanting to know more, and how they can be a part of what Transformation will bring to Talladega," Lynch said. "They stop by the ticket and administration offices, not to mention going on social media. The drivers and teams have shown great support, and want our sport to grow.

"We had Daytona 500 Champion Austin Dillon here, along with Hall of Fame team owner Richard Childress when we made our initial announcement in July. After they saw what was coming down the pipe, they were mesmerized. We have never seen so much excitement at this place, really since that first race back in 1969."

"For the spring, we are super excited about the tunnel, as we will be able to get our fans in and out of the track with ease. It will become even more important in the fall, when we have the entire finished product of Transformation. Fans are going to see a unique destination, with the 35,000 square-foot Open Air Club. It will feature ample seating, a bar and a 41-foot, diagonal video screen, all within just a matter of feet from the top 22 drivers' garage area.

"We have aligned ourselves with some incredible construction companies, and throughout the ISC design and development team has made it where everything will fit into place next year. Some construction will start in the new year for projects that will be completed in the fall, but that work won't affect anything during our spring race weekend. For the Phase 2 fall effort and completion, work will begin immediately after the checkered flag falls in April, so we have a good plan in place, that won't affect any of our scheduled racing events."

According to Ellis Bennett, project manager of Taylor Corporation of Oxford, Ala., the biggest challenges are the time constraint and weather. 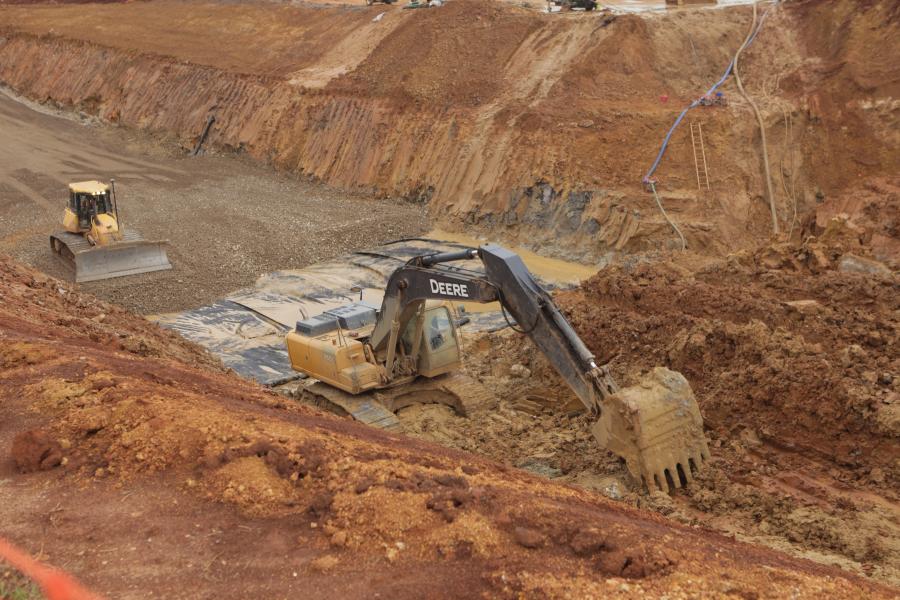 "The tunnel phase of the Transformation project would typically take eight to 12 months to construct," Bennett said. "We were only allowed five months of construction time for completion.

Construction of the tunnel is moving forward at a steady pace.

Heavy machinery has been used to dig the pathway of the tunnel going into the infield near the entrance of Turn 3. In addition, part of the track's asphalt was broken apart and removed near the current Gate 9 crossover.

"We saw-cut the track, so that we would have a smooth edge to tie back to," Bennett said. "We then used an excavator with a hydraulic hammer to bust up the asphalt and the concrete crash walls, before hauling it off."

"We ran into pinnacle limestone rock in the bottom of the excavation that we had to deal with," Bennett said. "The dirt material that was between the rock pinnacles was saturated, and we had to undercut up to 5 feet more than anticipated, so that we could bridge back over and have a solid bottom."

During the excavation phase, a dozen employees worked 12-hour shifts, 24/7. Currently, roughly 40 employees, including subs, are working well beyond a typical day's effort.

"Everyone has a whatever-it-takes attitude, and while the weather is in our favor, there have been multiple days that extended beyond the 12 hours," said Bennett.

The elements have not always been kind to crews, as they've had to battle rainy conditions sooner than expected.

"The winter months are typically the wettest time of the year in Alabama; however, it usually doesn't set in until early to mid-December," Bennett said. "Unfortunately, this year the end of October and first of November were unusually wet. We had to deal with several rain events in excess of three inches, and one that was more than five inches.

"We have already had November snow flurries this year, which is rare for the Deep South. Our employees worked through the 3-inch rainfalls, although on a normal job we would not attempt to work in these conditions. The only day that we were shut down completely by Mother Nature was during the five-inch rain storm."

The arched, prestressed concrete panels that form the roof of the tunnel will be installed during the early part of 2019.

"After the panels are set, the structure will begin to look like a tunnel," said Bennett. "There's also a 10-foot diameter stormwater pump station that will be installed. This is designed to assist in our dewatering process during construction, and will be utilized to handle stormwater after construction is complete." 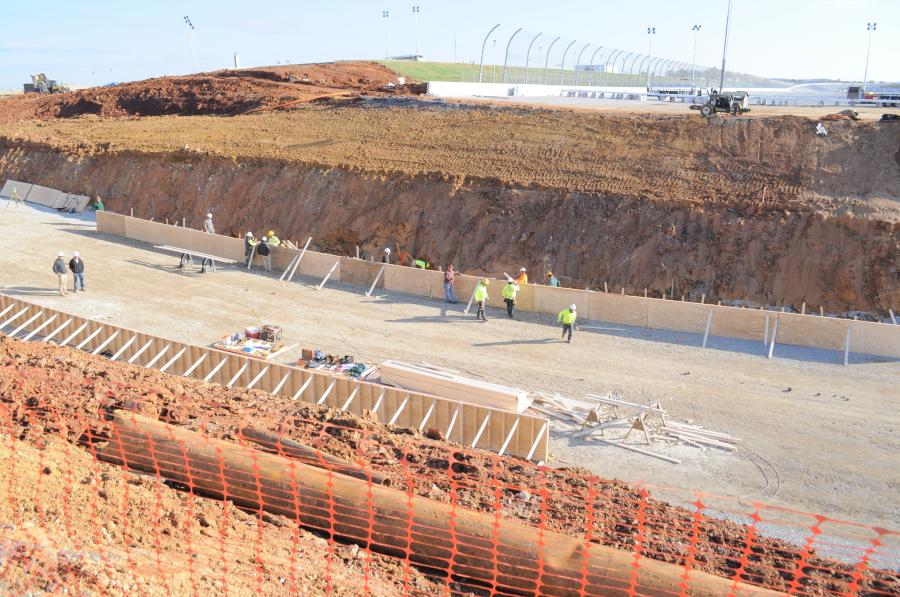 Because workers began construction about two weeks after the fall race, the track was in excellent condition. The project required approximately 52,000 cu. yds. of excavation, however, due to unsuitable soils in the bottom of the excavated area.

"I would guess that we are pushing 60,000 cubic yards excavated so far, for the tunnel alone," said Bennett. "We also had about 8,000 cubic yards, in addition, that had to be excavated for the stormwater pump station."

As for heavy machinery being used on the job, said Bennett, "Every task requires specific pieces of equipment. For example, during the excavation process, an 800-size excavator, a dozer and four off-road trucks were used. For installing dense-graded base for the concrete to be formed on, we used a dozer with GPS machine control, a motorgrader with GPS machine control, along with a smooth drum roller. To install concrete, we must utilize two concrete pump trucks."

A total of 3,000 cu. yds. of concrete will be used for the tunnel slab and foundation walls, along with 100 tons of rebar.

"Forming and pouring all the concrete will be the most time-consuming portion of this project. Backfilling under the track will be meticulous, as we are going to take extra precaution," Bennett said.

For Lynch, the completed tunnel can't come soon enough, as he focuses on the big picture.

"We have had a great history and have been a great tourist destination for many years," he said. "Transformation will take us into the next 50 years, serving current fans, future fans and some who may have not been to our venue in a few years.

"We are a world-class facility that is getting even better. This entire effort is being conducted with one main purpose — our fans, and to continue to make Talladega Superspeedway the leader in motorsports. I can tell you that no one will be disappointed."