Terex Puts a PAL in the Bucket for Lineworkers 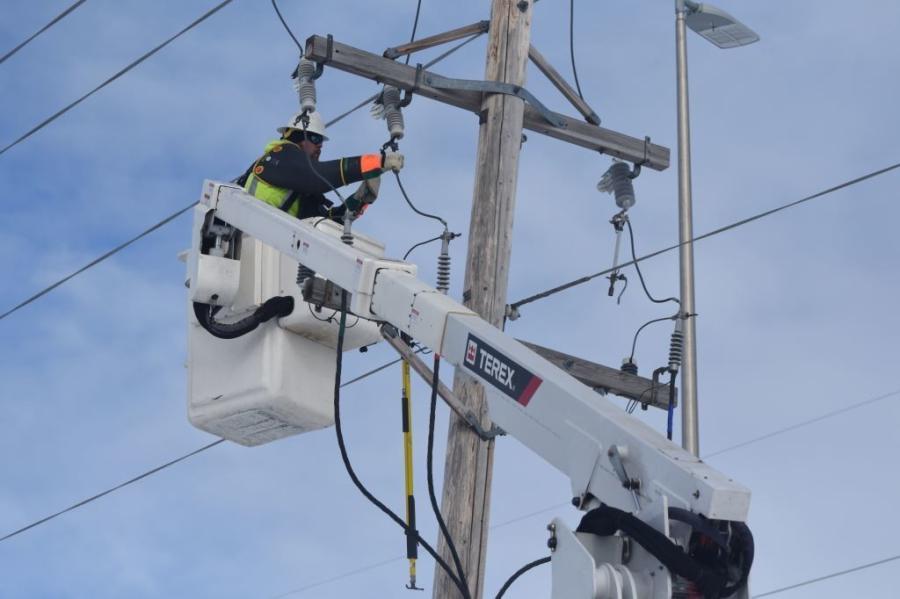 Cass County Electric Cooperative serves more than 50,000 members in 10 counties in southeastern North Dakota. The electric co-op maintains a fleet of more than 100 pieces of equipment, including about nine digger derricks and 13 aerial devices manufactured by Terex Utilities. Most of its aerial devices are under 50 ft. (15 m) platform heights, frequently used for servicing nearly 3,000 mi. of overhead lines.

"In August 2018, we were contacted by Terex Utilities to see if we would be interested in piloting the new positive attachment lanyard device," said Steve Cossette, fleet supervisor of Cass County Electric Cooperative. The warning system is designed to reduce the chance of an operator elevating the bucket without a safety harness lanyard attached.

"Terex Utilities has a history of pioneering innovations in the utility market. The Positive Attachment Lanyard [PAL] device is one such example," said Ted Barron, vertical market manager of Terex Utilities. 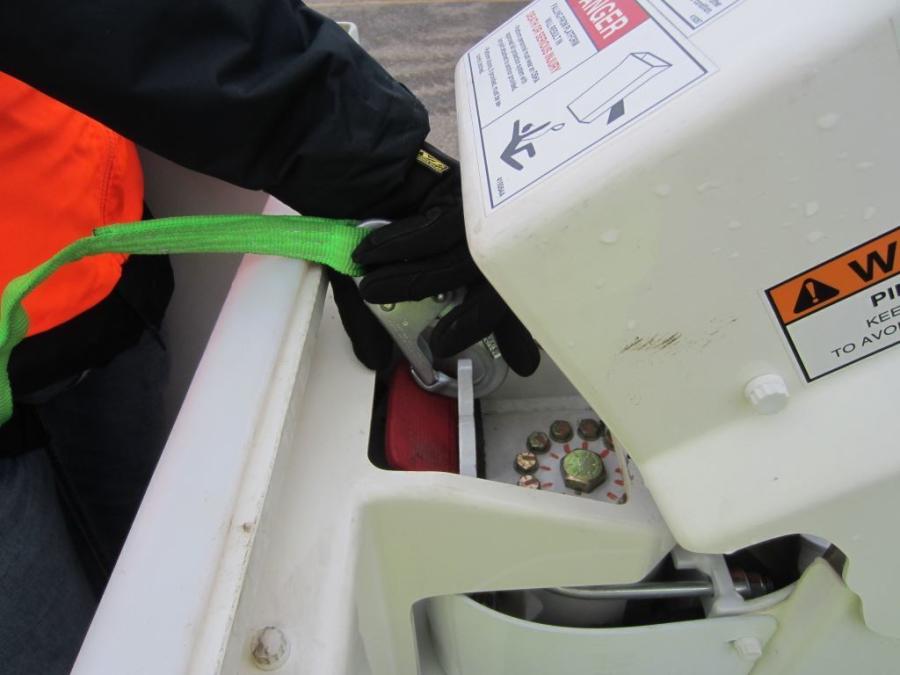 By involving Cass County Electric Cooperative in giving us user-focused feedback early in the process, Terex Utilities was able to be nimble in the product development of the PAL device, he explained.

"We engaged with Cass County Electric Cooperative through the various stages of the development, which allowed us to test how it supports safe work practices in the field," he said.

Several of the co-op's core values, including safety and innovation, align with the principle behind the new positive attachment lanyard (PAL) device, which was installed on one of Cass County's LT40 telescopic aerial devices.

"We continually make investments in safety. It's our top priority," said Jodi Bullinger, vice president of engineering and operations of Terex Utilities. "The attachment system offered us another tool in our tool box" to remind line workers to follow safety protocols, explained Bullinger.

The electric co-op has a policy of 100-percent tie off in aerial devices, but sometimes a worker might be focused on the work at hand. On the off-chance that he or she forgets to clip into the harness, an alarm sounds as a reminder. 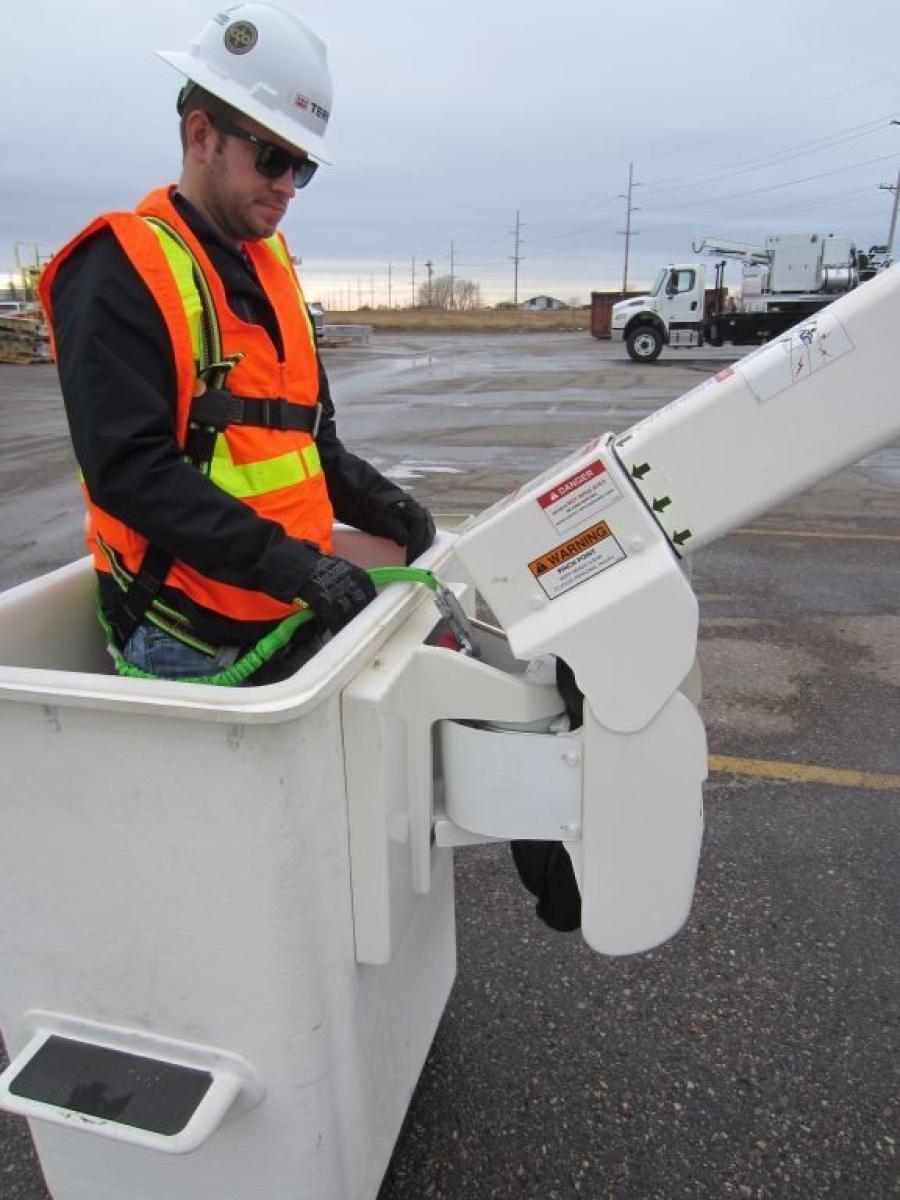 PAL is an option available on Terex LT unit orders beginning in the second quarter of 2019.

"I like that the device is easy to use. It's not bulky and doesn't require any extra equipment to deploy," said Mike Mahlke, a Cass County lineman who used the PAL device over a period of about six months. "When you are called to work in the middle of the night and focused on urgent work to be done, you might forget to clip in. This is a great reminder to properly use fall protection," he said.

Barron further explained that feedback from Terex Utilities customers contributed to the development of the PAL device. When talking to customers, their response was that most of the time when a worker fails to attach the lanyard, it's an honest mistake.

"The worker was concentrating on the job and just forgot. We hope that linemen will consider the PAL device as a friendly reminder in the bucket. It's there to promote safe work practices. Ultimately, we want to eliminate non-attachment events," he said.

When considering the implementation of the device in their fleet, Bullinger said it was critical that the device be simple and not impede the work.

"Because it is an integrated feature like a seatbelt in a car and it doesn't prevent the bucket from moving, it got buy-in from the crew," she said.

According to Terex Utilities' research, a small percentage of operators intentionally attempt to thwart the system. To address this, Terex Utilities is working on developing a Smart PAL, one that uses telematics data to time and date stamp every lanyard attachment and detachment, as well as activation and deactivation of the boom.

"In the future this information could be used for corrective behavior, as well as for determining utilization in order to guide preventative maintenance and inspection," said Barron.

However, Bullinger reported that it was more important to the co-op to get full support from its field workers to use the device, so they chose to not collect any data through telematics. In addition to using it in the field, Cass County Electric Cooperative also participated in several rounds of testing of the device with Terex Utilities.

PAL will be an available feature on Terex Hi-Ranger LT40 aerial devices and XTPro Series Tree Trimmer trucks by ICUEE 2019.

"Customer interest will determine how quickly we adopt the device to other Terex aerial device models, whether we will make it available as a retrofit to units in the field, and our adoption of it as a standard feature," said Barron.