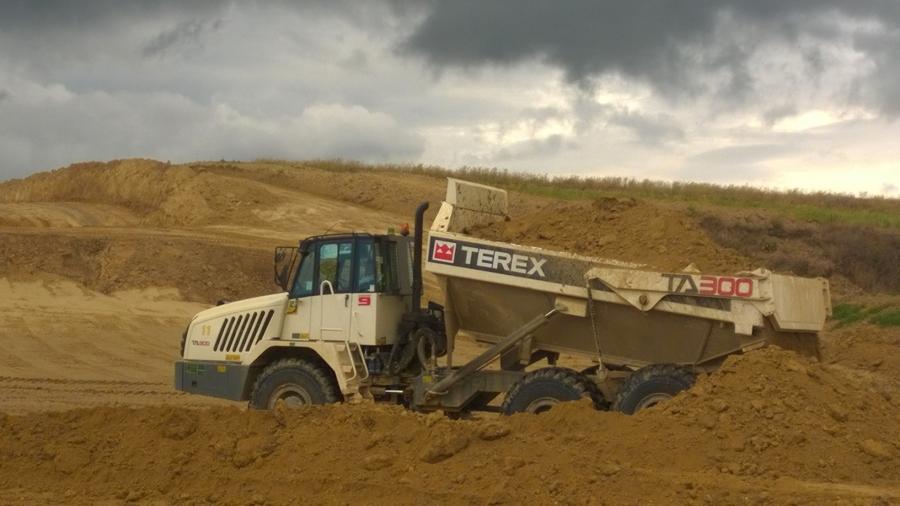 Five Terex Trucks 31 ton (28 t) capacity TA300s have been selected to take part in the expansion of the North Autobahn (A5), which will form a modern highway between Vienna in Austria and Brno in the Czech Republic.

Five Terex Trucks 31 ton (28 t) capacity TA300s have been selected by local contractor Windisch to take part in the expansion of the North Autobahn (A5), which will form a modern highway between Vienna in Austria and Brno in the Czech Republic. The proven performers work 12-hour shifts, six days a week, and are responsible for shifting 1.8 million cu. yds. (1.4 million cu m) of earth.

Scheduled for completion in 2017, the project was implemented by Austria's Autobahn and highway financing stock corporation, ASFiNAG. The A5 is already a popular route due to the international checkpoint at Drasenhofen, and the extension will be welcomed by commuters as it will ease traffic build up, shorten the 81 mi. (130 km) transit time between the two cities, and reduce noise pollution. The articulated haulers for the A5 project were supplied to Windisch by Terex Trucks' Austrian distributor, Mlecka Construction.

Founded in 2011, Mlecka is a family-run construction company based just outside of Vienna in Oeynhausen. Appointed an official Terex Trucks dealer in 2015, Mlecka has strong connections in Austria, Slovenia and Hungary.

John Mlonek, commercial sales manager at Terex Trucks, said: “Like other EU countries, the Austrian market has proved difficult but the extension of the North Autobahn is one of the brighter investments in the tough articulated hauler market.

“Windisch was looking at other brands but chose to go with Terex Trucks, which is a real vote of confidence for our robust Scottish machines.”

Created at the Motherwell factory, the TA300 is built to work harder for longer. Its leading tractive effort and effective power to weight ratios ensure material is moved as quickly as possible in all conditions — providing increased productivity and low cost of operation. With fully independent front suspension as standard, tire/ground contact is maintained regardless of the terrain, increasing tractive effort and reducing cycle times while also providing operators with a comfortable haul, according to the manufacturer.

In addition, the transmission retardation system in combination with engine exhaust brake support the fully-enclosed oil-cooled multidisc brakes for enhanced protection of the brakes, resulting in less maintenance and a longer life span for the brakes. The machine also is powered by a fuel-efficient five cylinder Scania DC9 engine, which develops gross power of 370 hp (276 kW) and maximum torque of 1,880 Nm.