A vestige of the height of the U.S. steel industry might came crashing down May 19, 2019, when Controlled Demolition Inc. (CDI) imploded the former Bethlehem Steel headquarters, Martin Tower.

Crowds gathered to watch the demolition of the area's tallest building, a 21-story monolith that opened at the height of Bethlehem Steel's power and profitability but had stood vacant for a dozen years after America's second-largest steel-maker went out of business. 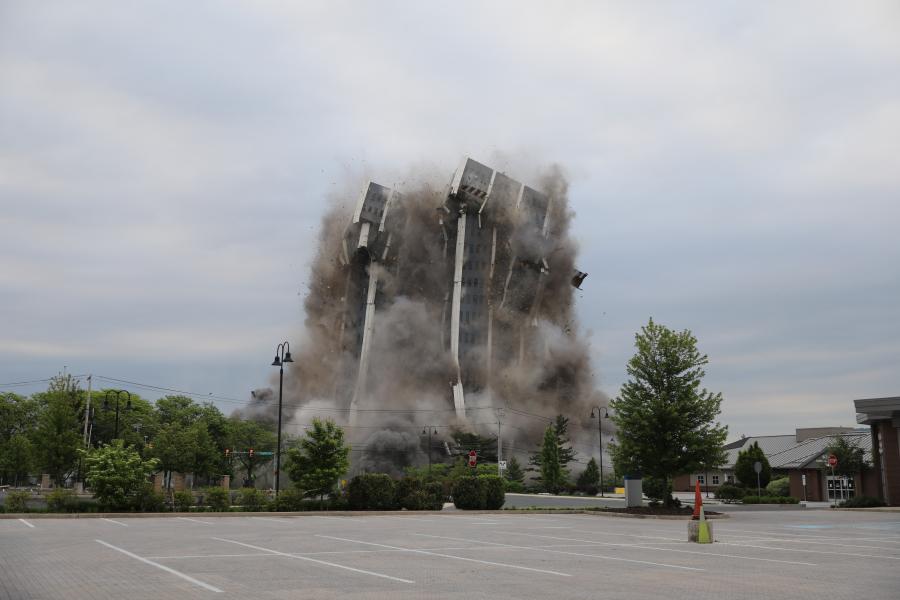 CDI used 8,850 ft. of prima cord to initiate the non-electric initiation system in the building that was detonated over 4.95 seconds to tilt the structure slightly to the southeast before dropping it vertically.

Explosives took out Martin Tower's steel supports and crumpled the 47-year-old building, which had earned a spot on the National Register of Historic Places despite its relatively young age. The skyscraper was named after then-Bethlehem Steel chairman Edmund F. Martin. The architect for Martin Tower was Haines Lundberg Waehler. It was built by George A. Fuller Construction Co. of New York, which also built the Flat Iron Building in New York in 1903, the CBS Building in New York in 1963 and 1251 Avenue of the Americas at Rockefeller Center in 1971.

Under the initial plan, Bethlehem Steel was to build a second tower, which is why some people refer to it as "Martin Towers." An annex was built, intended to connect the two towers, but the second tower was never built.

Specs of the Fall

According to Mark Loizeaux, president of CDI, to bring the building down his company used 8,850 ft. of prima cord to initiate the non-electric initiation system in the building that was detonated over 4.95 seconds to tilt the structure slightly to the southeast before dropping it vertically. 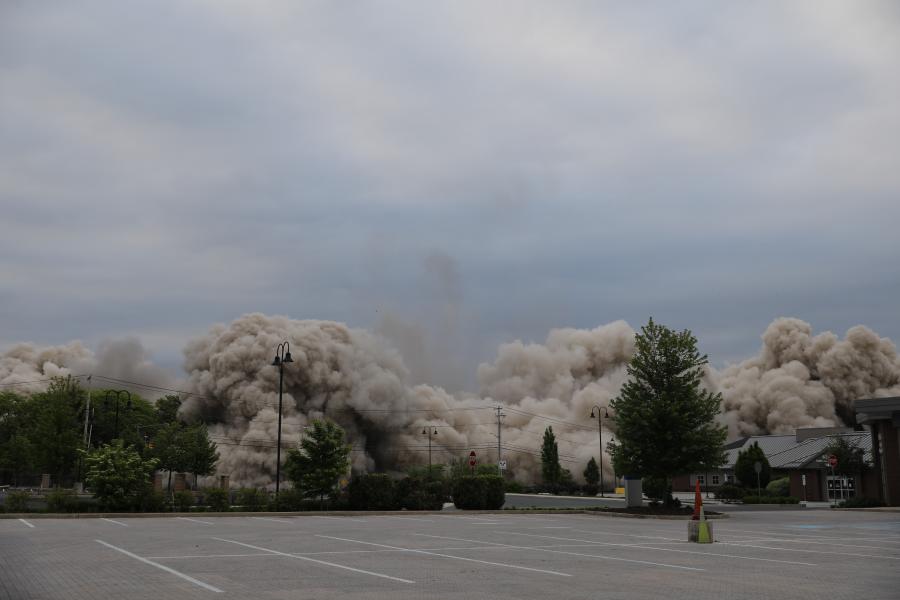 Explosives took out Martin Tower's steel supports and crumpled the 47-year-old building, which had earned a spot on the National Register of Historic Places despite its relatively young age.

CDI paid special attention to keeping noise levels down, said Loizeaux. Vibration and dB(L) noise levels were recorded at 10 locations around the site during the implosion. CDI's implosion sequence and dB(L) reduction methods resulted in noise and vibration levels well below those specified by the Pennsylvania Department of Environmental Protection. The post-blast survey revealed that there was no change in the condition of adjacent improvements to remain as a result of the implosion. Approximately 48 hours following the felling of Martin Tower and cleanup of post-implosion dust by the property owner, HRP Management, not a single complaint had been received by the contractor or the Mayor's Office from the public or adjacent property owners, according to Loizeaux.

Tom Garbett, president of Armor Refractory, based in New City, N.Y., the demolition contractor onsite, said his company will be "doing the processing and will be shearing up and burning all the steel beams to prepared steel."

Once that's completed, the processed material will be sold to Sims Metal Management in Port Newark, N.J., and then distributed to mills and wherever Sims sells it abroad.

Garbett said there'll be a total of 16,750 tons of steel and 70,000 tons of concrete, which will be crushed to inch-and-a-half minus. To accomplish that, Armor Refractory will be using a Terex Finlay J1175 jaw crusher from Edward Ehrbar of Yonkers, N.Y. Armor also will be using two Komatsu PC800 excavators, also purchased from George Maggiolo, product specialist of Ehrbar. The PC800s will be outfitted with Genesis 990 MAXX shears.

Work begins in earnest after the Memorial Day weekend, Garbett said, with all the moves being "super moves" more than 140 tons. Garbett expects total project time will be four months.

Tyler Kent, whose father worked at Bethlehem Steel for 46 years and raised 11 children, said his "heart stopped" as he watched the building fall. His father and other relatives took pride in working at the industrial behemoth that armed the U.S. military and helped shape skylines across the country.

"To see it come down brought a tear to my eye. I didn't think it was going to affect me emotionally like it did, but I just can't imagine it's gone. It's so sad," said Kent, who could see the tower from his house.

Martin Tower's current owners spent years trying to redevelop the 332-ft. structure — the tallest in a heavily populated region of Pennsylvania that includes the cities of Allentown, Bethlehem and Easton — but ultimately concluded it made more economic sense to knock it down and start over. Plans call for a $200 million development with medical offices, retail stores, a restaurant, a convenience store, a hotel and 528 apartments. 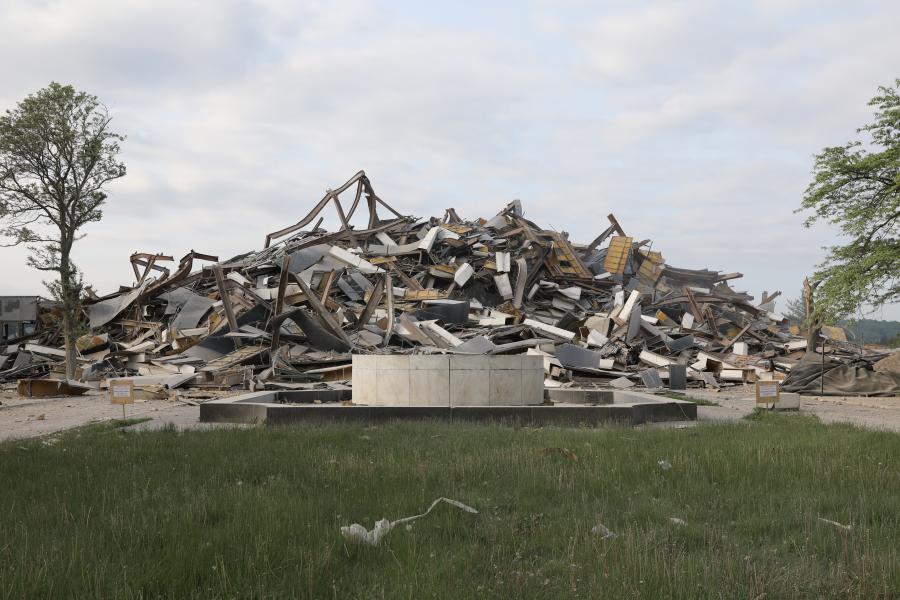 The post-implosion debris pile averaged 23 ft. in height above ground level with the highest point at 32 ft. (Joe Grant photo)

Bethlehem Steel was a major supplier of ships and armaments to the U.S. military during World War II, and its steel is found in the Empire State Building, the Golden Gate Bridge and many other landmarks.

The company moved into its new corporate headquarters in 1972, shortly before the U.S. steel industry plunged into a severe recession. Bethlehem Steel, which employed more than 120,000 people when Martin Tower opened, declared bankruptcy in 2001 and closed for good two years later.

To some, the tower — built in a cruciform shape to maximize the number of corner offices — symbolized corporate excess.

"This is where the money went that the workers never got," said Fran Maiatico, whose father worked at Bethlehem Steel. She was among hundreds of people who gathered several blocks away from the building to watch it come down.

Leonard Gentilcore, 88, a retired Bethlehem Steel structural draftsman who worked on Martin Tower, said he didn't care that it was gone. He said he associated the building with out-of-touch company executives who helped drive Bethlehem Steel into the ground.

But his son, Mike Gentilcore, a former Bethlehem Steel metals researcher, said "it breaks my heart" that an important piece of the company's history is no more. He recalled looking out the tower's windows as a child, and later worked there himself.

"It's the end of an era and I'm going to miss seeing it there," he said.

The company's flagship Bethlehem mill, less than 2 miles from Martin Tower, was redeveloped into a casino and entertainment destination 10 years ago. CEG

(Associated Press contributed to this article.)