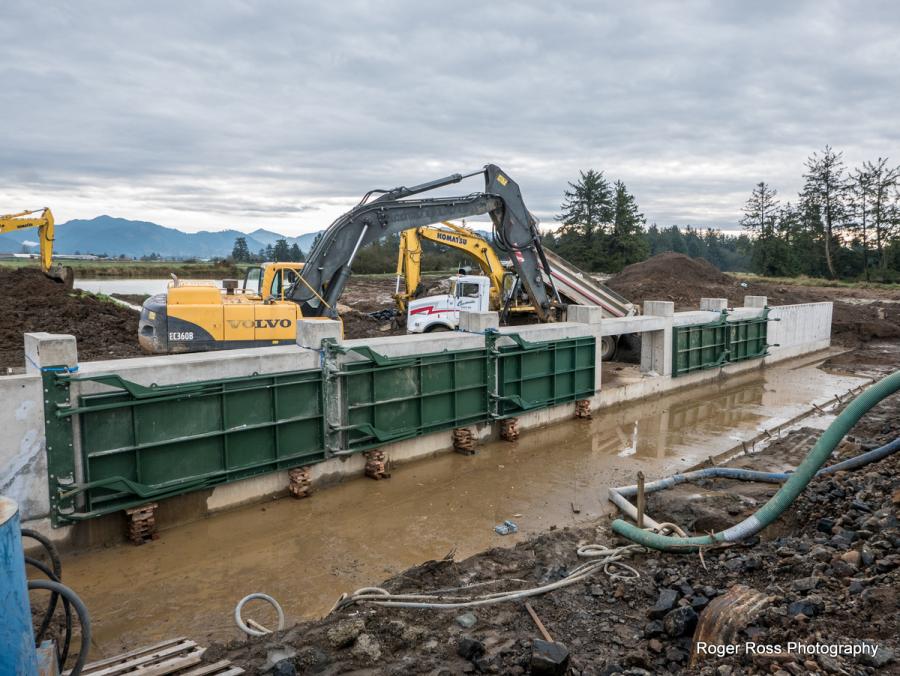 For decades, folks in Tillamook, Ore., looked for ways to diminish the flooding that so frequently troubles this agricultural community, damaging property, threatening lives and generally shutting down town.

“We had a series of 100-year events,” said Lisa Phipps, executive director of the Tillamook Estuaries Partnership. “It was obvious that we were going to experience these events on a fairly regular basis, causing impacts on the economy, as well as lots of frustrations and lots of concerns.”

“They came to town and an engineer was brought on board,” Phipps said. “Northwest Hydraulic Engineering started modeling different potential projects to address flooding. A number of activities took place to help smooth the way for flood waters to exit more quickly. The project started to develop to involve some land the county had purchased in 1999 at the mouths of the Wilson, Trask and Tillamook Rivers — which all converge at the same point. This property sits in the middle of that. It looks like a mitten from above. There is this land sitting down there and suddenly the wheels started turning. When modeled, it showed the greatest flood mitigation.”

But it also came with an unexpected benefit.

“There were 234,000 cubic yards of material that had to be dealt with,” he said. There was the removal of 8.5 miles of levees; the construction of 2.5 miles of new reinforced set back tidal levees, the clean-up of two mill sites that were legacy sites from the 1920s and 1940s that were contaminated with primarily motor lubricant that was disposed of on site. Then we uncovered an abundance of asbestos contaminated roofing material that had to be handled and properly disposed of. I characterize this project as whack-a-mole.”

“They did some channel work. They then had to rebuild substantial levees and spillways. And there was a lot of tree removal. I saw some awesome equipment. There was this massive machine. They'd dig big blocks of concrete and asphalt at the old mill site and dump it in this machine and it would chew it down to pebble size. The whole world shook when this machine ran.”

That machine was no doubt a cement grinder, just one piece of heavy equipment in a fleet of many.

“We had seven-yard dump trucks on tracks, Morookas, a wide variety of dozers G-5s and G-6s,” Levesque said. “We had a crawler dozer, John Deere 850Cs and 850Ks, hauler dozers. We had articulated dump trucks, a variety of highway trucks, rollers, Hitachi 450s, loaders, a couple Link-Belt excavators, miscellaneous scrapers and other equipment.”

The construction price tag was about $6 million or half of the total price tag.

By taking out the levees that were blocking the flow of flood water, the flood plain was reconnected to the river system and bay, resulting in the reconnection of 14 mi. of ancient channels, which provide habitat for salmon, Levesque noted.

“What was happening was when tides come in, the tide gates close and block the salt water from coming in,” added Phipps. “The water behind the gate stays in place. It's not a problem until you have flooding situation. Now that whole area that has been opened up. The Wilson, Trask and Hoquarton Slough can move versus coming through the community. There is still a levy there because we had to protect the structures behind it. The idea is it will help relieve flood events. Not the big ones, but the nuisance events. It doesn't stop flooding, but it does reduce the flood levels in terms of height and it also should reduce the duration. It's a little lower and there for less time.”

In addition to the mill sites, workers discovered a bald eagle nest in the middle of the area, requiring strict monitoring. No work was permitted two hours after sunrise or two hours before sunset, the hours when eagles are hunting and bringing food back to the nest. It also straddled an ancient Native American village, calling for full-time cultural resource managers to be on site. Workers didn't find any Native American artifacts but they did uncover someone's garbage — largely bottles and the like — that was old enough to call for documentation.

“Tillamook Estuaries Partnership has been involved from the start,” Phipps said. “We will step in now as the monitoring agency, following the project to see that it does what we hoped it would.” CEG