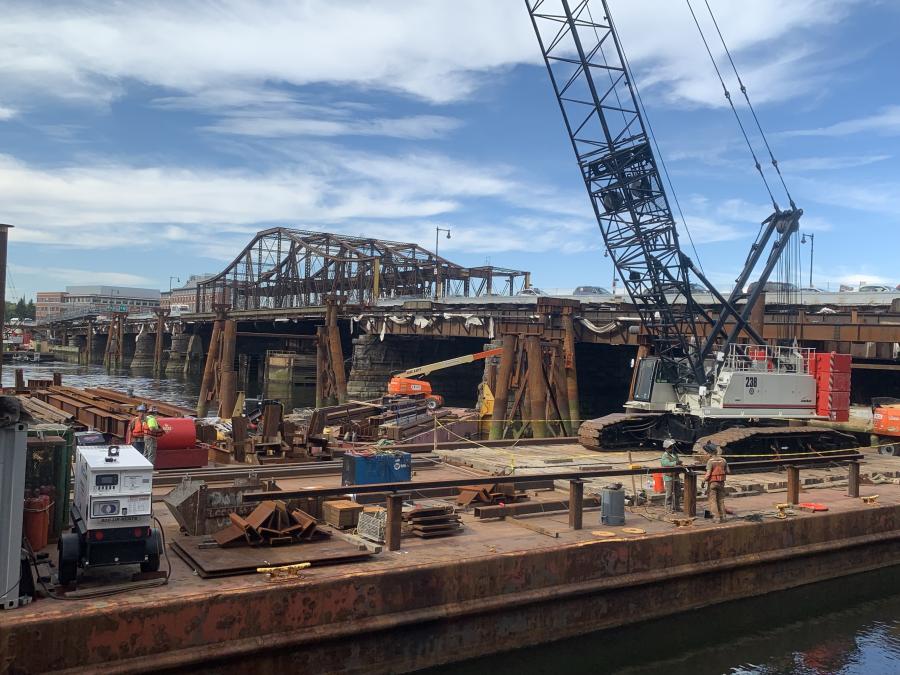 Also known as the Charlestown Bridge, the North Washington Street Bridge can be traced to 1898. Consisting of 12 spans, and roughly 1,000 ft. long, the bridge has been reconfigured and repaired multiple times to extend its lifespan, including the permanent closure of its swing span in 1961, and the removal of the elevated Orange Line in 1977. (Katherine Isbell photo)

Having served motorists for more than a century, Boston's historic North Washington Street Bridge is nearing its end. Efforts are under way to replace the structure with a new bridge designed for the 21st century, at a cost of $200 million. 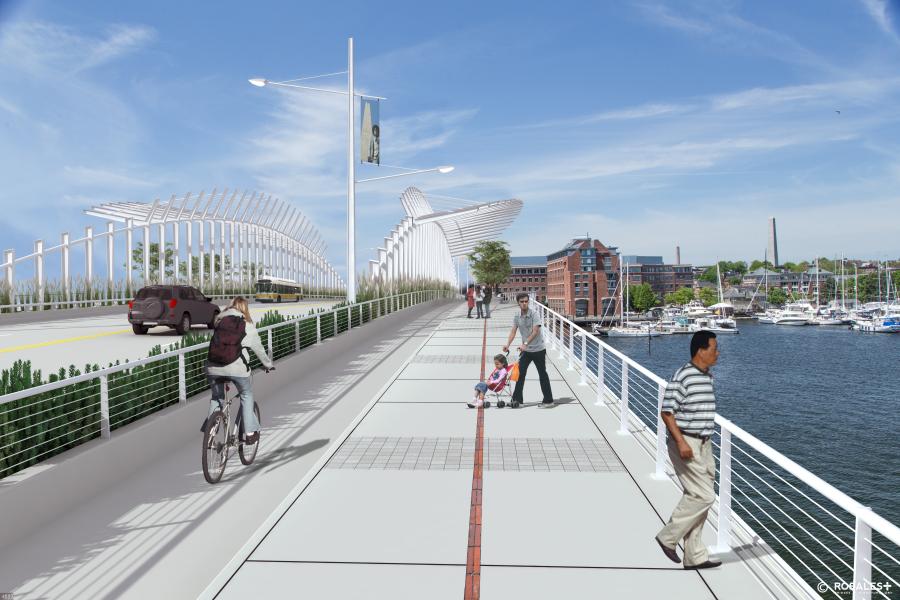 "This new North Washington Street Bridge will be multimodal," said Jacquelyn Goddard, Massachusetts Department of Transportation (MassDOT) spokesperson. "This means it has accommodations for the public traveling on foot, bicycle, on public transportation or by motor vehicle."

Goddard noted that the bridge has been extremely important to people's daily lives.

"This bridge is a key link between the Charlestown and North End neighborhoods in the city of Boston. It's traveled frequently by visitors to the city who follow the Freedom Trail to the USS Constitution ship and the ship's museum."

Through the decades, time has taken its toll on the aging structure. The bridge has been declining steadily, with the center bay having shut down more than 15 years ago. Since fall 2017, ongoing emergency repairs by the city have restricted lanes even further. In its current condition, including repairs, the bridge costs the city of Boston $3 million to $5 million each year to keep safely operational.

Also known as the Charlestown Bridge, the North Washington Street Bridge can be traced to 1898. Consisting of 12 spans, and roughly 1,000 ft. long, the bridge has been reconfigured and repaired multiple times to extend its lifespan, including the permanent closure of its swing span in 1961, and the removal of the elevated Orange Line in 1977. After much planning and deliberation, the time has come to usher in the new.

"This bridge is extremely old, and the design does not conform to modern-day highway standards," said Goddard, who added that construction is on schedule, with the focus on the temporary bridge's installation. 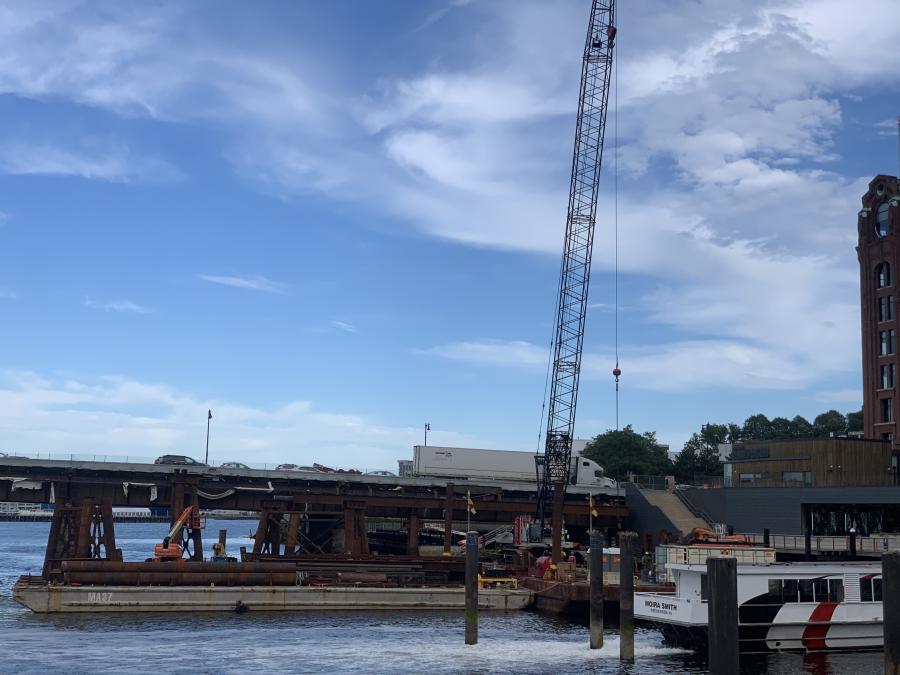 Motorists and those living near the bridge are having to cope with the ongoing construction. MassDOT and general contractor J.F. White Contracting are working to complete the project as soon as possible, and are keeping the public informed along the way. MassDOT officials shortened the length of construction by deciding to install a temporary bridge for travelers adjacent to the structure that will be torn down and replaced.

Goddard said, overall, reaction from the community has been positive.

"The project has been well received by the public, as members know this is a deteriorated structure which has been in need of replacement."

According to MassDOT's website, North Washington Street carries local and regional vehicular traffic, MBTA and Boston Public Schools buses, private shuttles, cyclists and pedestrians. The bridge is considered a critical link in the MBTA bus network, providing passage for several Haymarket destined bus routes from the north. MassDOT and the MBTA have been working to minimize the travel time delays for these routes.

"The city of Boston, through its public works department, is excited to have designed this signature bridge, which complements the iconic Zakim Bridge both aesthetically and functionally," said city of Boston Chief of Street Chris Osgood. "This bridge has a dedicated bus lane and cycle tracks, space for vehicles, and broad, landscaped sidewalks, which will carry thousands of pedestrians including everyone walking Boston's Historic Freedom Trail."

City engineer Para Jayasinghe, who serves as project manager, said the team is equally pleased to see the replacement project under way.

"Though designed and developed through my office, we had the assistance of many sister federal, state and local agency partners who worked collaboratively to create a worthy replacement of the current 100-plus year old bridge."

The city of Boston and MassDOT undertook a joint planning process from 2004 to 2017 that included coordination with local, state and federal agencies and extensive public outreach to design a new bridge.

Construction began in August 2018 and will continue into spring 2023, with work taking place in stages. The new bridge will feature seating and accent lighting, as well as landscaping that includes trees and other plantings. The bridge will be 1,100 ft. long and 120 ft. wide at the center, with two vehicle lanes in each direction and one inbound dedicated bus lane. There will be wide sidewalks on both sides, including a scenic overlook.

MassDOT and the city of Boston have offered financial incentives to encourage early completion. Currently, the contractor is installing a temporary parallel bridge to speed up construction and lessen impacts to traffic and pedestrians.

The bridge's westerly sidewalk, the Lovejoy Wharf stairs leading to North Washington Street near the Converse building, the adjacent section of the Harborwalk passing under the bridge and the Paul Revere Park Playground stairs are closed to the public during installation of the temporary bridge. The Tudor Wharf Walkway, located under the bridge next to the water in Paul Revere Park, will be closed at times for safety during construction, with access provided via the Water Street underpass.

The prefabricated temporary bridge will be in place for approximately two years while the existing bridge is torn down and the new bridge is built. Two inbound lanes, one outbound lane and one sidewalk on the temporary bridge will maintain access for all modes of travel during the most intense periods of work. Project construction hours will be 7 a.m. to 10 p.m.. During various stages, the contractor will work between the hours of 10 p.m. and 7 a.m. In addition, 24-hour work shifts also are expected.

Maximum noise levels allowed are specified in the contract, varying by time of day, with the lowest levels allowed overnight. Additional provisions are in place for the control of dust, hazardous materials, water quality and other possible issues.

MassDOT is keeping individuals informed and helping them plan around impacts through traffic notices, construction look-aheads, regional outreach to divert traffic, stakeholder briefings and public meetings in Charlestown, the North End and the West End.

The new bridge will be a complete street over water, and will improve water flow and conditions for boaters by reducing the number of piers in the water from 12 to 5, and widening the navigation channel to 141 ft. CEG