Time in a Bottleneck: Traffic, Scheduling Among Biggest Challenge on I-94 Project

Construction teams in Wisconsin are finalizing work on the eastbound lanes of Interstate 94 near Tomah Road as part of a major reconstruct. 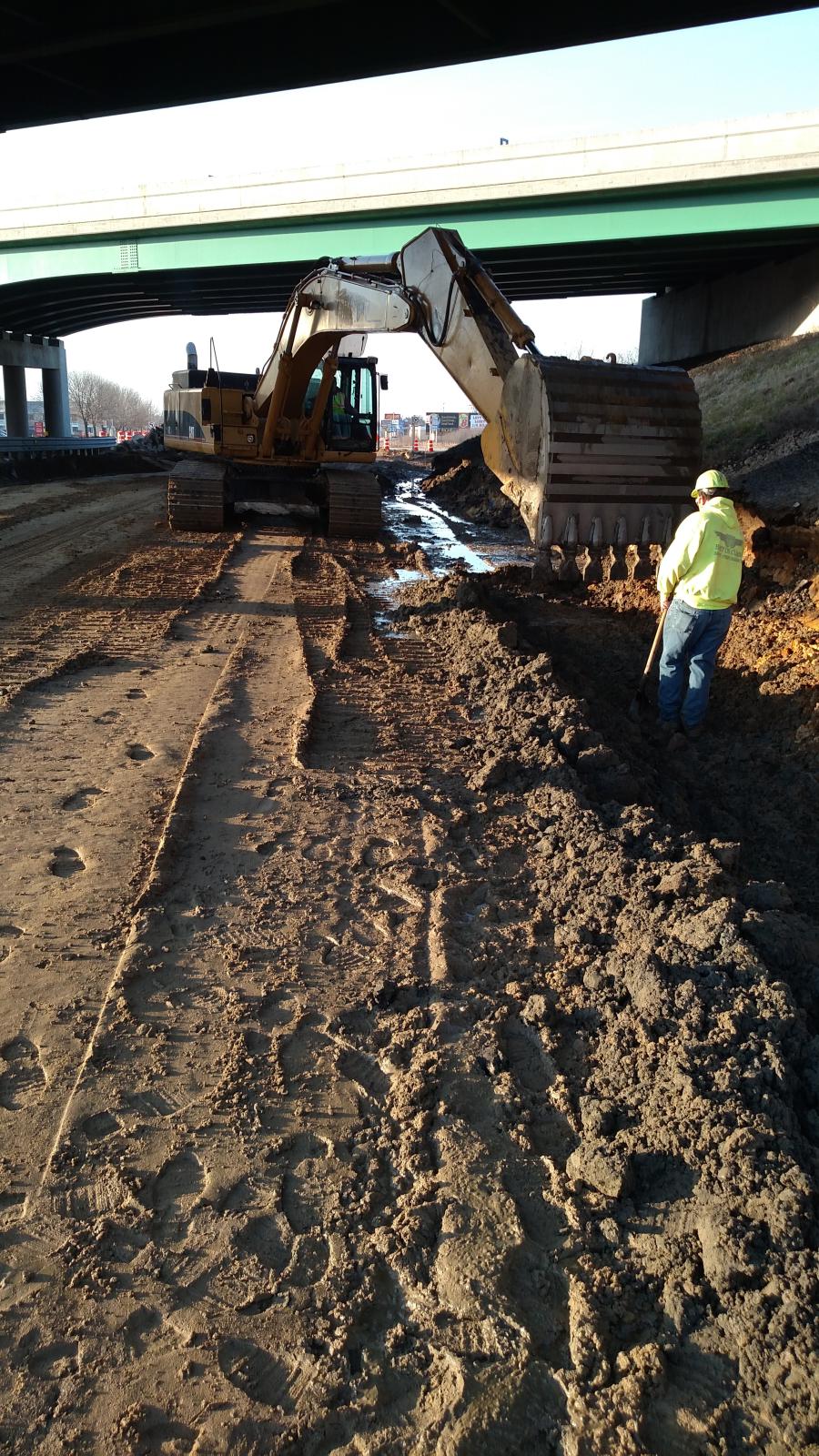 WisDOT officials said one major concern has been dealing with the traffic.

Construction teams in Wisconsin are finalizing work on the eastbound lanes of Interstate 94 near Tomah Road as part of a major reconstruct. The project calls for improved pavement, three bridges, the widening of shoulders from 10 to 12 ft. (3 to 3.6 m) and the addition of pipes.

Work has been carried out in phases, with construction on westbound I-94 completed last year and crews currently focusing on eastbound I-94 and U.S. 12.

In an effort to replace deteriorating pavement and also update eastbound I-94 to meet current safety standards between Kirby and the U.S. 12 bridge on the north side of Tomah, the project required the replacement of part of U.S. 12 north of the Highway 21 intersection and replacement of the eastbound exit ramp at U.S. 12 (Exit 143).

The project has been needed for quite some time.

“The pavement structure had surpassed its life cycle,” said Brian Meyer, Wisconsin Department of Transportation (WisDOT) project manager. “Maintenance costs were excessive on this stretch. The bridges also were at the deficient stage. This section was constructed in 1968.

“We have detoured U.S. 12 traffic for only two nights, once to remove the I-94 structure over U.S. 12 and also one night to set the beams on the same structure. The main traffic control set up is that we closed eastbound I-94 and ran single lane counter directional on the westbound I-94. We also only allowed work on I-94 prior to Memorial Day and post Labor Day.”

The work for 2015 was let at just over $11 million, with James Peterson Sons Inc. serving as the prime contractor. The project for 2016 was let at $12.5 million. The contractor for 2016 work is Hoffman Construction. The plan was originally set to be one contract over two construction seasons. In fiscal 2015, WisDOT had seen some higher than estimated lettings and was over on its budget and needed to move projects to fiscal 2016. By splitting this project into two contracts, it allowed the movement of around $13 million to slide into fiscal 2016.

WisDOT officials said one major concern has been dealing with the traffic. Due to the volume of traffic, crews were not allowed to be on the interstate between Memorial Day and Labor Day. The contractor proposed to finish work prior to the May holiday. The change benefited the company, WisDOT and the traveling public. In order to accomplish this task, extra efforts were needed from all contractors involved and the DOT staff.

Crews have finished concrete paving, paving the asphaltic shoulders and are in the process of wrapping up final erosion control measures, guardrail installation and new signage on I-94.

“Major work is completed,” said Meyer. “Like all projects, hiccups are found along the way. Both the contractor and WisDOT staff worked through the issues to provide a quality product for the taxpayer and traveling public.

“The weather hasn't been bad. We had a really good early warm spring to get things started. It did turn cold for a couple weeks in April, which made us do extra efforts in our concrete protection.”

Meyer said a reconstruct differs from other construction projects, but safety is still the top priority.

“In some aspects, rebuilding is easier than a maintenance project, because your building new and not having to tie into existing, which handcuffs what you can do. Other than that, we treat them the same.”

Meyer also said the bridges have been completed.

“With expediting the schedule and building all three at the same time, temporary access to the interstate had to be constructed at both Empire Avenue and U.S. 12. Also since Mill creek is a Class I trout stream, full containment needed to be added for removal of the existing structure.

“The exit ramp was cleared to be closed for up to 14 days. In that 14-day closure, which they actually completed in 12, the contractors built the entire ramp and approximately 3,000 feet of mainline, that was being used as temporary access to the ramp.”

The pavement deterioration called for a complete replacement.

“The existing was eight-inch concrete pavement with asphalt overlay. All that material was removed and crushed into recycled base course and reincorporated into the project. New 12.5 inch reinforced concrete pavement was placed with 3.5 inch asphaltic shoulders,” said Meyer.

Meyer said most work was done during normal daytime construction hours, more than eight hours a day. The crusher did run nights, as well as the bridge contractor, to remove the old bridge and set the beams on the U.S. 12 structure.

Approximately 115,000 cu. yds. (87,923 cu m) of dirt/material is being moved on the project. Equipment being used on the job has included a dozer, grader, end loader, dump trucks, off-road haul trucks, a backhoe, a tracked crusher, concrete breaker, water truck and a vibratory roller.

Some of the main materials being used during construction have included the existing asphalt and concrete for the base course made on site, along with additional concrete and asphalt.

Regarding early prep/site work, Meyer said, “Hoffman peeled off the asphalt overlay with dozers and made a windrow of asphalt on the existing shoulder. The underlying concrete was then pulverized. The concrete was piled on the asphalt windrow.

“Once the concrete was removed, the subgrade was graded where all pavement was removed. They then brought in a tracked crusher and crushed the concrete/asphalt mixture into base and placed it on the prepped subgrade. The inside shoulder was then graded to final subgrade and covered in the addition base left by the crushing operation.

“Due to the expedited schedule, the most time-consuming part was making sure the DOT had enough staffing on site to cover all operations and provide support for anything the field guys needed from the home office.”

Hoffman Construction performed the concrete pavement removal, along with recycling the pavements into base course, storm sewer, grading and shaping.

“The concrete pavement removal and recycled aggregate base, along with profile balancing, was the major aspect of the grading contract,” said James Hoffman, Hoffman Construction Company president. “We had to balance the material between bridges that were removed and recycle the pavements by crushing and screening the material to make DOT spec gravel.

“In order to complete the eastbound IH-94 by late May, we needed a February 22 start date. To hit the completion date with three bridges, we needed to work on all bridges at once, and had to walk the concrete paver across all three bridges to complete the project in a linear manor. We recycled the pavements in place using two mobile crushers, balancing the earthwork as we progressed. All contractors and cooperation from WisDOT was needed to complete on time.”

Hoffman said the change in completion date is significant.

“The Warrens Cranberry Fest is a large festival the third week in September. Instead of facing single lane counter directional, the project will be complete. It's difficult to place a value on the savings to the traveling public, not to mention the additional safety savings. We had past experience and great historical data on what we could accomplish, which we shared with the WisDOT, and they agreed that with acceleration the work could be completed.”

Subcontractors on the project include Trierweiler Construction and Supply Co., which was responsible for the concrete paving, curb and gutter and barrier walls. Lunda Construction performed work on all three bridges, while Mega Rentals, Inc. carried out the traffic control and pavement marking. Mathy Construction Company handled the asphalt paving.

According to Paul Wetzel, Mathy Construction operations manager, “The biggest challenges included multiple mobilization for small quantities to keep the project moving, because of the tight time frame to complete both projects, as well as paving in early spring and late fall with less than ideal conditions.

“Projects should be built in the summer,” Wetzel said. “The 2016 project had some paving in March, April and May, and the 2015 project paved in April, May, late October and November.”

The schedule for the first stage of 2015 was westbound construction from March 9 to Memorial Day. During the summer months, U.S. Highway 12 was under construction until Labor Day. Stage two of 2015 began after Labor Day and wrapped up in November.

Construction on I-94 and U.S. 12 is scheduled to be completed May 26. Occasional lane closures may occur in June for finishing work, with full completion June 24th.

Tina Thompson, president and CEO of The Greater Tomah Area Chamber of Commerce/Convention and Visitor's Bureau, said, “Tomah is a transportation hub for the state of Wisconsin. We not only have an airport, Greyhound and Amtrak service, but we also have two major interstates and five heavily traveled highway roads that intersect here. Investments in our transportation system are critical to our continued tourism and economic growth.”

A community of 9,200 people, Tomah is a major destination for motorcycle riders and Amish and cranberry tours.

“Tourism is a strong economic driver for Tomah. We were very concerned about the construction at this intersection, as most of our hotels and eateries are located off this exit. If travelers cannot access our city from I-94, our tourism industry will suffer greatly. The shorter construction period means that all of our industries that rely on the interstate traffic for visitors can continue regular operations, keep their employees working and can continue to contribute to the community,” said Thompson.

“A daily average of 19,000 vehicles travel on the I-94 Tomah corridor,” said Thompson. “There are another 11,000 average daily vehicles traveling on Highway 21 at that location. With that many people on the road in a day, we realize that transportation needs to move smoothly and quickly. Those 30,000 vehicles going around and in our city will appreciate the ability to travel easily.”

I-94 was the first section of the Interstate Highway System completed within the state. It runs east to west through the western, central and southeastern portions of the state.

U.S. Highway 12 runs east to west across the western to southeast portions of Wisconsin. It enters from Minnesota running concurrently with I-94 at Hudson, and provides local access to cities such as Menomonie, Eau Claire, Black River Falls, Tomah and Mauston.