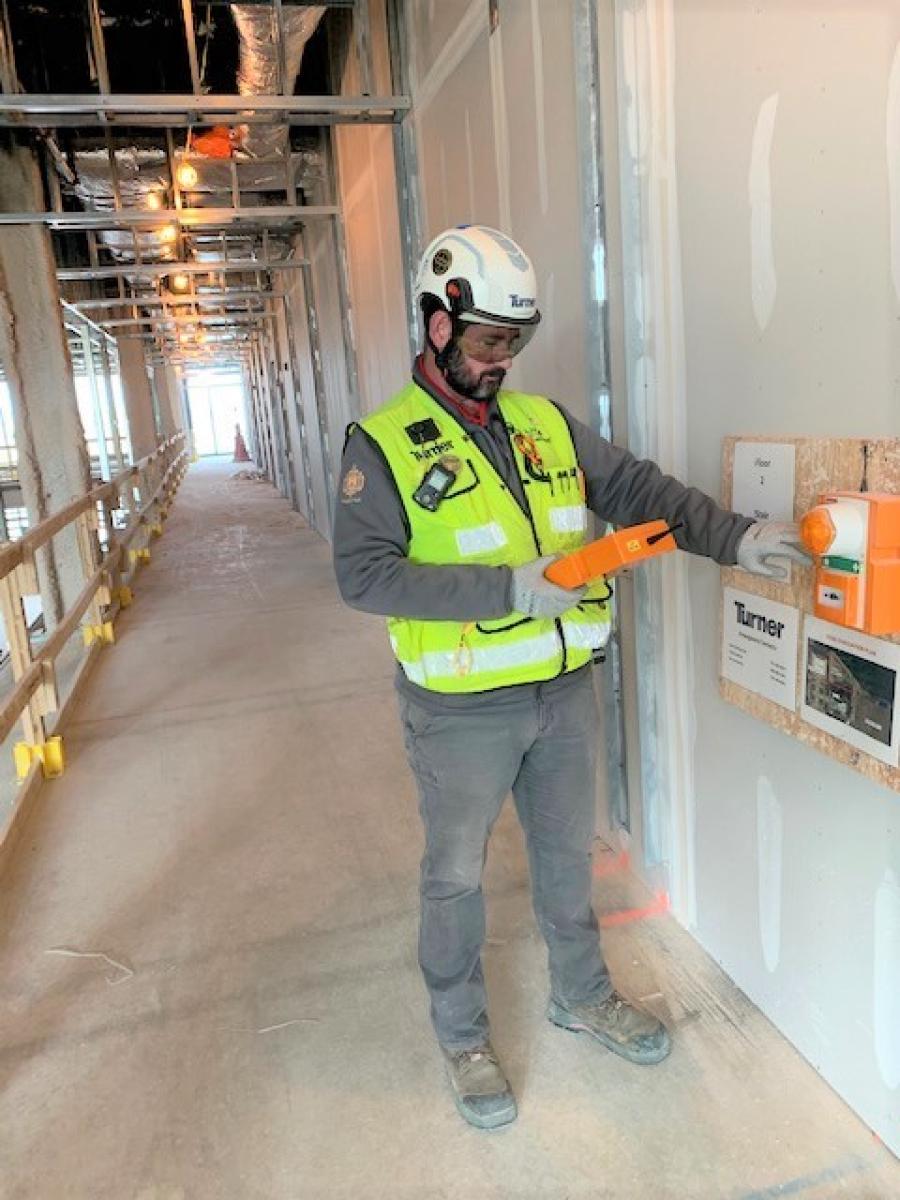 In a short, two-minute YouTube video uploaded by the Wall Street Journal in 2014, a worker is seen barely escaping unharmed from a fire in a wood-framed apartment building under construction in Houston, Texas. He stands on the edge of a fifth-floor balcony, frantically waving his arms, in desperate hope for a rescue. The harrowing video ends with the worker jumping safely to the ladder of a fire truck mere moments before the blazing roof collapses behind him.

"He jumped from a porch to the one below just as the firefighters were trying to set up and get over there," he recalled. "If they had an alarm in the building and smoke detectors to sense the fire, it would have given him time to evacuate."

Until recently such technology did not exist for this particular application. Now, he recommends the WES3 Fire and Emergency System from Ramtech Electronics.

Fire safety and risk mitigation are second nature to McDermott, project safety manager of Turner Construction, a U.S.-based company that completes more than 1,500 projects a year internationally to the tune of $12 billion, according to its website. He recently celebrated his two-year anniversary with Turner but is no stranger to construction, having been a safety manager and superintendent for other large companies over the years.

McDermott's list of credentials is long and impressive: he holds three distinct certifications from the Bureau of Certified Safety Professionals as well as being an OSHA Certified Instructor, and also serves as current president of the Washington Metro Area Construction Safety Association, to name a few. His career began as a Fleet Marine Force Hospital Corpsman with the Navy and he has worked on several federal projects to date.

One such project is Hopper Hall, the new Cyber Building currently being erected on the Naval Academy grounds in Annapolis, Md. It started in October of 2016 and is slated to be completed and operational for the 2020-21 school year. Turner's first experience using the WES3 system was on a project in New York, but this project would mark the first time McDermott had the opportunity to deploy it.

The building is named after Rear Admiral Grace Hopper, known as the "mother of computing" for her contributions to the field of computer science back in a time when neither computers nor women in science were commonplace. The project and its name are both noteworthy because this will not only be the first building named after a woman at any of the nation's three major service academies, but it will most likely be the last major structure to break ground in the Naval Yard.

Protecting the people, equipment, and structures on construction sites such as these is not only vitally important, it also poses a unique set of challenges. As a result, The National Fire Protection Association (NFPA) estimates that more than 6,000 fires occur each year on construction and major renovation sites, leading to hundreds of millions of dollars' worth of property damage and multiple lives lost. These are figures that, with proper protocols in place according to those set forth in NFPA 241: Standard for Safeguarding Construction, Alteration, and Demolition Operations, have every reason to decrease.

That's typically not the case, however. While the standard calls for an appropriate fire safety program to be in place and fully operational for the entire duration of the project, maintaining adequate fire safety protection during each and every phase through to completion is rarely the norm. Implementing a fire safety plan on a construction site is a logistical complication when you factor in the constantly changing evacuation routes, slow response times for workers out of earshot of alerts, and adding round-the-clock fire watch to the payroll.

Increased education efforts on the NFPA 241 standard are necessary to help alleviate the problem of improper implementation, according to the NFPA. But that only addresses part of the issue. The other part? Lack of effective, adaptable equipment that can hold up to the task.

All too familiar with this gap in the market, it only took one presentation with Ramtech for McDermott to know he wanted this system in place. Calling it "new and innovative," he pushed for his supervisors to seriously consider the purchase for the Hopper Hall site. He executed two fire evacuation drills to prove his point.

"When you have a six-story building like this and you're using an air horn, you're not very effective at getting people to hear that," McDermott said. It typically takes several people several trips through the building to alert everyone — and by then it can be too late. Consequently, the first fire drill saw a meager 120 people evacuate the site within eight minutes.

After installation of the WES3 system, the second fire drill resulted in all 240 workers getting out the building in less than six minutes. Another part of McDermott's test was the fact that the drywall was hung and precast was up on the outside by the time the second drill took place, but the workers inside confirmed that the system was very loud and the strobe lights visible throughout the building. He found the customizable options for the sounds and lights to be useful, but settled on the factory preset sound because it seemed to project the best.

One of his other favorite features of the WES3 system is mobile phone notifications: McDermott said, "I can be somewhere else and get notified on my phone when an alarm goes off in the building."

Smart sensors also rank high on the list of reasons for McDermott's recommendation: "Smoke is going to have a much smaller particle size to it than dust. And the system is able to differentiate between the two." This prevents a lot of false alarms on a job site where airborne dust can be a potential problem.

Because the system provides 24/7 monitoring of the site, the need for a person to stand guard as fire watch each night is eliminated even when its necessary to heat the building for drying and curing overnight. This can save money and satisfies regulations in some local jurisdictions.

Another strong selling point for McDermott was the ease of set up and relocation, which he handled himself with support from the local WES3 distributor, Space Age Electronics, as well as a representative from Ramtech who came to visit the site.

"It was very easy to set up the system," he said. "The instruction manual was very helpful." After mounting the units to boards they can be hung anywhere, including bare studs or drywall. "My carpenters and drywall guys will take it down off of the wall, put the drywall up, and then hang it back up.

"I've got a couple extra units that I can move to unusual areas. Like right now, I have one up on the roof. I've got work going on in the elevator machine rooms — my HVAC guys are up there installing fans."

A base unit, in a trailer fairly far away from the structure under construction, alerts the management team of emergencies as well. Even with the distance, he reported that they had no trouble receiving the wireless signal and responding to the alarm.

Lastly, McDermott pointed out the ability to program in location codes to cut down on response time.

"If there were someone up on a top floor that was injured and they pressed a button to call for help, on the base station it tells me what floor and what area of the building the individual is in by the code that I set up."

With three stairwells, one in each corner of the triangular building, it was important to him to be able to program the system to recognize specific locations.

"It's a very high-visibility military project," McDermott said. "We have senior leadership from NAVFAC on site. Everyone so far has been extremely impressed with the capabilities it has."

Thinking back to the YouTube video where, in the space of just two short minutes a man almost lost his life, it's clear to see exactly how critical every second is when it comes to any kind of fire. WES3 provides solutions in every phase of construction to protect both workers and property. Until Turner's efforts are complete in 2020 and the protection of the building is passed on to the owner, Hopper Hall is a safe place to work.