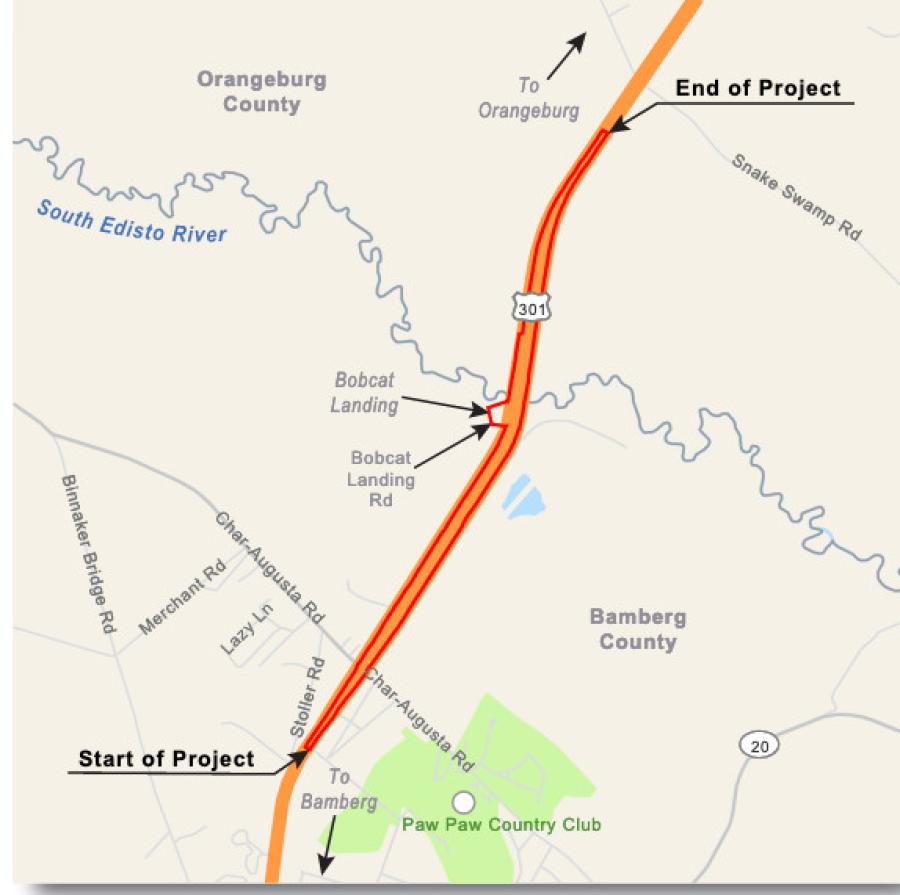 The project includes demolishing the existing U.S. 301 southbound structure and improving the roadway approaches to meet current design standards. Similar work is planned to redo the bridge on SR 439 and realigning the roadway itself to better maintain and improve access to Bobcat Landing from U.S. 301.

Bamberg Road will be shifted south onto a new alignment to line up with the existing U.S. 301 median access road just south of the U.S. 301 bridge, according to a SCDOT notice on the project.

Bobcat Landing Road and the boat ramp will remain open during construction of its new bridge.

Construction on both is set to begin late this year or in early 2021.

To allow traffic to be maintained along Bamberg Road through the project area during construction, the proposed project requires traffic control north and south of the U.S. 301 bridge. As crews work, the southbound lanes of U.S. 301 in the project area will temporarily close and all southbound traffic will be shifted to a northbound travel lane using crossovers in the median of the highway.

Opposing traffic on the northbound side will be separated with concrete barriers or flexible delineators, the SCDOT said.

Other temporary daily lane and shoulder closures may also be necessary on U.S. 301 during project construction.

Four design alternatives were considered for the projects — two for each of the bridge replacements.

The U.S. 301 southbound bridge work's preferred alternative includes building the new structure on the current centerline of Bamberg Road South with no shift in the alignment. Therefore, traffic would be maintained through the project area during construction, according to the SCDOT.

The preferred alternative for the Bobcat Landing Road bridge upgrade creates a new alignment for SR 439 that would allow for construction of a new span. Demolition of the old bridge and removal of the existing roadway embankment would occur once construction of the new structure is complete; therefore, access to the boat ramp would be maintained during construction.