Union Leaders Meet With Trump, Construction on Their Minds

The president meets with leaders of several construction and building trade unions. 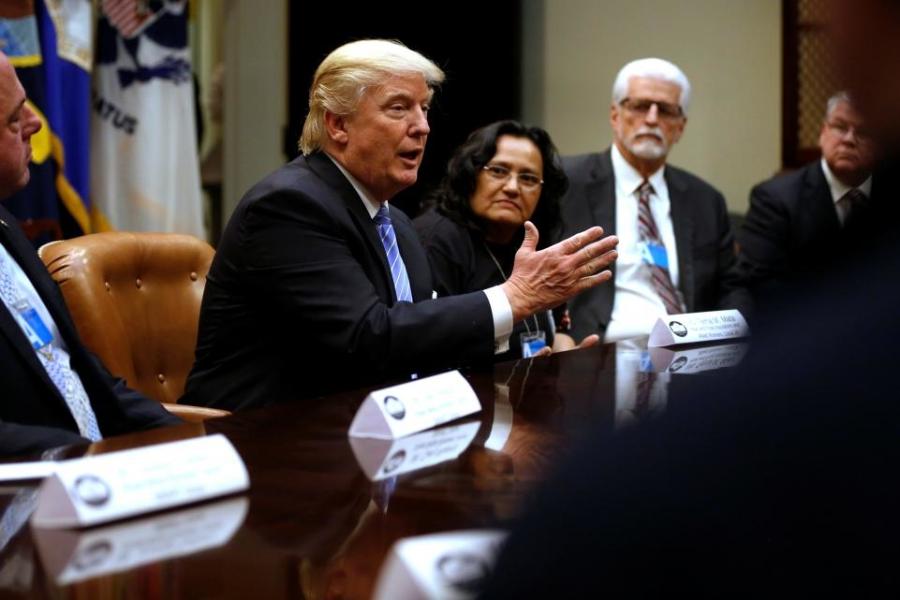 At a meeting with the leaders of several construction and building trade unions, President Trump reiterated on Monday his interest in directing hundreds of billions of dollars to infrastructure investments, some of it from the federal government, union officials said.

“That was the impression I was taken away with,” said Sean McGarvey, the president of North America's Building Trades Unions, an umbrella group, on a call with reporters after the meeting. “That the American citizenry and the American Treasury will be invested in building public infrastructure.”

Mr. McGarvey added that Mr. Trump clearly felt that much of the money should come from the private sector and that some of the investments could take the form of public-private partnerships, an idea the president floated as a candidate.

The meeting included roughly half a dozen union leaders and a similar number of rank-and-file members, as well as senior White House officials, including Vice President Mike Pence; Reince Priebus, the chief of staff; Katie Walsh, the deputy chief of staff; Stephen K. Bannon, the chief strategist; Kellyanne Conway, the president's counselor; and Sean Spicer, the press secretary. It took place in the White House and ran for well over an hour.

The presence of so many senior aides suggests that the Trump administration sees a political rationale to courting the building trade unions, many of whose members appear to have voted for Mr. Trump last fall.

The White House did not comment on the meeting, but Mr. Spicer affirmed in his press briefing that infrastructure remains a high priority

Mr. McGarvey and Terry O'Sullivan, the general president of the Laborers' International Union of North America, stressed to reporters their satisfaction at meeting with the president so soon after the inauguration. They said they went the entire Obama administration without being invited to a similar meeting.

(Some building trades leaders attended meetings with a broader cross section of unions at the Obama White House.)

Both groups endorsed Hillary Clinton for president in 2015, but their presidents were effusive in praising Mr. Trump's knowledge of the building and construction industry.

“We have a common bond with the president,” Mr. McGarvey said. “We come from the same industry. He understands the value of driving development, moving people to the middle class.”

Mr. O'Sullivan was previously the chief executive of the Union Labor Life Insurance Company, and he said that during his tenure there the company invested in some of Mr. Trump's projects and had a good relationship with him.

Mr. McGarvey said he worked on a Trump project in Atlantic City in the early 1990s and had always been grateful for the work. “It was the middle of a recession; no one had jobs,” he said. “He made investments to expand at the time Trump Plaza. I got that job after being unemployed for six months.”

The two union leaders said they had discussed a number of specific projects with the president and his aides, including the Keystone XL Pipeline, the Dakota Access Pipeline and the Jordan Cove liquefied natural gas export and storage facility in Oregon. More broadly, they discussed possible investments in building and repairing bridges, schools and hospitals.

Certain projects, like the Keystone and Dakota Access pipelines, have divided the labor movement, with the building trades supporting them as a source of jobs with good pay, and other unions, like the Service Employees International Union, opposing them on environmental grounds, and out of concern for desecrating sacred Native American lands.

At the meeting, Mr. McGarvey raised one point of possible discord between the labor leaders and the Trump administration: the so-called Davis-Bacon Act, which requires the federal government to pay contractors and subcontractors “locally prevailing wages,” as determined by the Labor Department, on most construction or renovation projects.

Many conservatives contend that the act inflates the cost of infrastructure projects, and on Tuesday, Senator Jeff Flake, Republican of Arizona, is proposing a bill to suspend it for federal highway construction contracts.

The president was noncommittal in response, he said. “He said he knows the Davis-Bacon proposal well, understands how it works,” Mr. McGarvey said, but avoided taking a position.