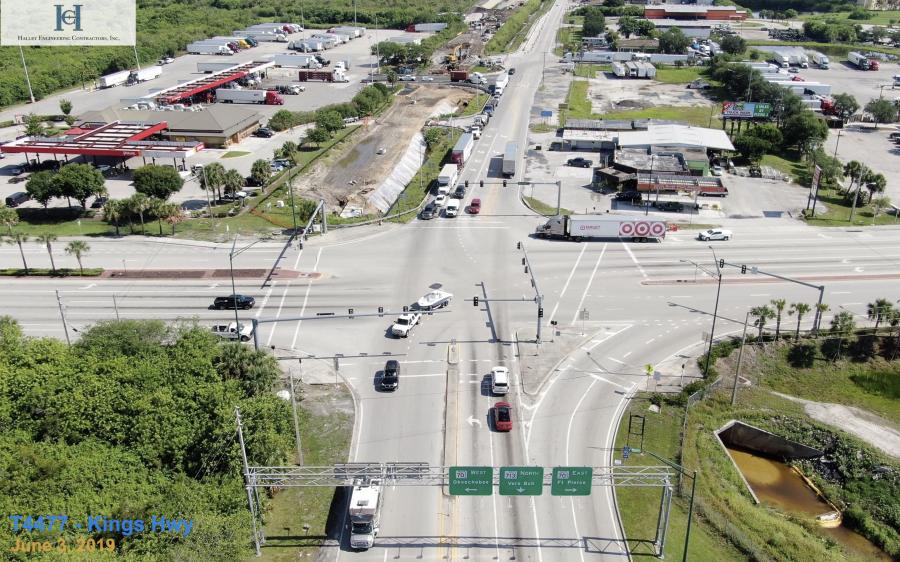 Built in the 1970s, 3.417 mi. of Kings Highway from south of State Road 70 to north of the I-95 overpass are being rebuilt by the Florida Department of Transportation (FDOT) in Fort Pierce.

Built in the 1970s, 3.417 mi. of Kings Highway from south of State Road 70 to north of the I-95 overpass are being rebuilt by the Florida Department of Transportation (FDOT), and the road near the city of Fort Pierce (Saint Lucie County) is being expanded to two lanes in each direction with a 30-ft. wide grass median between the north-south lanes.

The highway upgrade also includes Type E curb and gutter (22‐ft.-wide raised, plus two 4‐foot-wide paved inside shoulders), 6.5‐ft.-wide outside shoulders that also will serve as buffered bicycle lanes, a 12‐ft.-wide shared use path along the west side and a 6‐foot-wide sidewalk along the east side.

In addition to the road work, HEC crews are relocating Canal No. 40 from north of SR 70/Okeechobee Road to south of Research Center Road and Canal No. 32W from north of Orange Avenue to south of I-95 overpass; realigning Kings Highway at the intersection with Okeechobee Road to improve the existing connection with the turnpike; replacing existing culverts/swales and installing a closed drainage system and retention ponds; installing a new highway lighting system; and upgrading signalization with vehicle detection devices and ITS cameras. 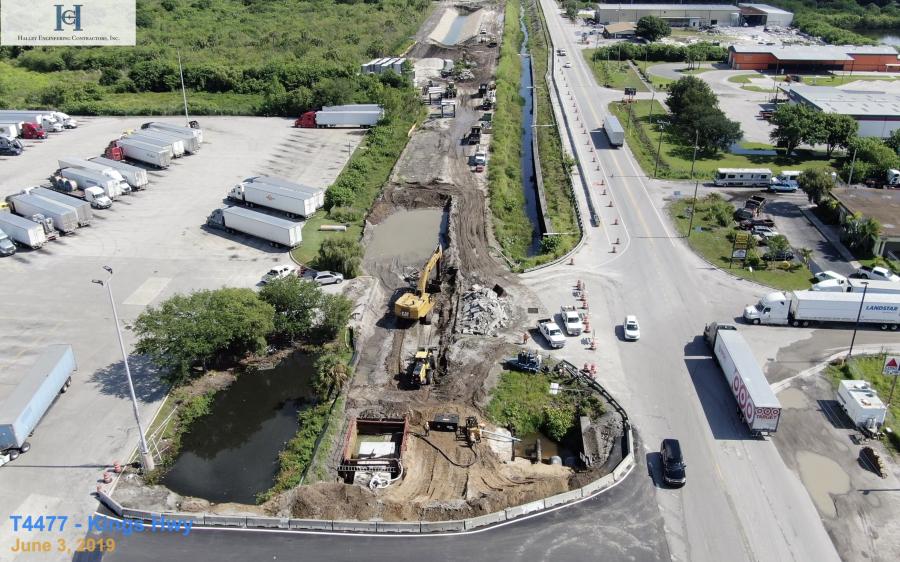 "The primary purpose and need of this project is for added capacity along the corridor due to current and future land use changes," said Bing Wang, P.E., FDOT's project manager. "The significant growth that this ‘high growth region' is undergoing, coupled with future expansion plans, have resulted in a severe need for added capacity along this corridor. In addition, various safety improvements are required which will be incorporated into the proposal projects."

Average annual daily traffic on the highway, prior to the work starting, was 8,000 cars and trucks.

A Project Development and Environmental study (PD&E) was conducted in 1994 to evaluate a four-lane rural section from Okeechobee Road to Indrio Road, and in 2006 a PD&E re-evaluation was done to consider an urban six-lane section within the same project limits. In 2008 a new PD&E study within the project limits evaluated a four-lane suburban typical section. This PD&E was completed in 2012 with the recommended alternative being taken to final design.

The existing typical section consists of one 12-ft. lane in each direction, with 6-ft.-wide shoulders and grass swales to the right-of-way line. There are no bicycle lanes or sidewalks, and guardrail is typically located along the project where the roadway parallels a drainage canal or ditch. The existing right-of-way typically varies from 50 to 60 ft. along the project limits, with wider portions at signalized intersections.

The proposed typical section will consist of a divided high-speed urban arterial highway with 12-ft. travel lanes, a 30-ft. median, 6.5-ft. bike lanes and a 12-ft. shared use path along the southbound lanes with a 6-ft. sidewalk along the northbound lanes on both projects. The proposed canals will be shielded by guardrail throughout the project limits.

The primary consultant, BCC Engineering Inc., is responsible for the design of the project. To protect construction crews, the speed limit on Kings Highway in the work zone has been temporarily reduced from 50 to 40 mph throughout the duration of the project. Short-term and longer lane closures during the day are in place as the work proceeds, with FDOT providing detours for motorists. 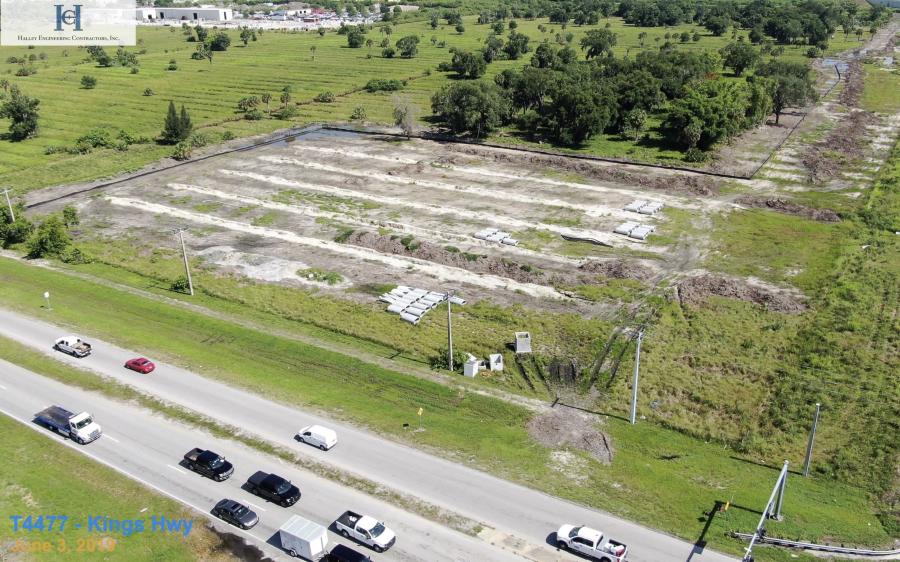 Nearly 18 months into the project, Halley Engineering has completed the following: the entire span has been cleared and grubbed, roughly 30 percent of the drainage work is finished, the excavation of two out of four retention ponds has been executed, and utilizing the fill material generated from them, HEC embanked the entire phase one NB new roadway portion of the project from SR70 all the way to Orange Avenue.

"We have completed the column-supported embankment soil stabilization improvement work underneath the new 10x10 concrete box culvert, and have installed approximately one-third of the 1,250 foot long box culvert," said John Morris, HEC vice president. "Recently we started the excavation and rock rubble revetment of the new Canal No. 40 section on the south end of the job, and we are very pleased with the progress of this work thus far. Our electrical subcontractor has also already installed a significant number of the drilled shaft foundations required for the new mast arms designed at all of the major intersections along the corridor."

The goals for this year's construction season are to continue with the drainage, box culvert and new canal construction so that the new canal can be tied in and opened, which will allow HEC to fill in the old canal in preparation to construct the new SB roadway section.

"The column-supported embankment work was a unique aspect of the project and somewhat rare for normal FDOT roadway construction," said Morris, "so it was great to get that work done and behind us right away without any issues or complications. Hayward Baker performed the soil improvement CSE work with us and did a fantastic job. This work required us to hire our own specialty engineer to fully design the CSE system, which had to be designed in accordance with a Technical Special Provision developed by FDOT specifically for this project and be accepted by the Department prior to starting the work.

"Being that this work was critical, it was done very early on in the project because it dealt with a very risky aspect that could have potentially caused a significant delay to the schedule," Morris added. "I commend the project team — CEI (Cardno/Corradino), the project design engineer BCC Engineering, FDOT District Four and Fort Pierce Operations, Hayward Baker and Halley's management team — for an excellent partnering effort to work together and expedite the design, review and approval of this critical work to avoid any negative impacts to the project." 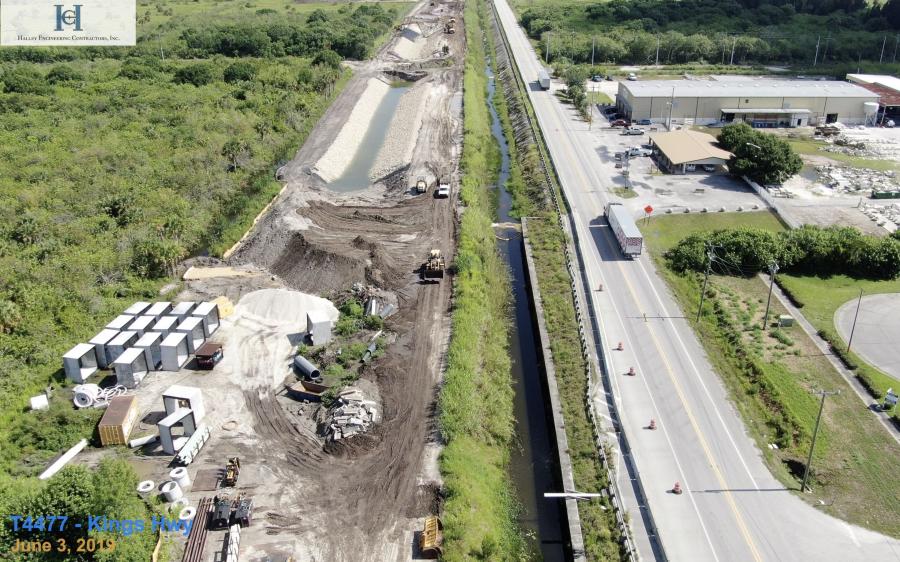 Johnson-Davis, the drainage subcontractor, is providing multiple crews for the drainage work, which is extremely critical to the overall schedule of the project.

"J-D's team from top to bottom is highly skilled and professional and has been a pleasure to work with on the job," Morris said. "Optimum Services Inc. is excavating the retention ponds and the new canals for us, and is also one of the main reasons the project is running ahead of schedule."

Minimal night work is required for this project, but there is a significant amount of utility relocation.

"FDOT Fort Pierce Ops Utility Coordinator Marcus Yates has done a terrific job managing this work," said Morris, "and expediting this work for us in a concerted effort to avoid any delays associated with the many utilities involved throughout the corridor. The safety of our workforce, inspection team and the traveling public is the number one priority for us, and we do our best to instill that mindset every single day in the minds of our employees and all of our subcontractors."

HEC has submitted a cost savings proposal to FDOT which modified the design of the new canals.

"They are currently reviewing for approval," Morris explained, "which will potentially provide a net savings to the department of over a million dollars. The entire project team, including the CEI, the design team and FDOT project personnel have been a pleasure to work with so far, and it's a great thing to see when everyone involved in a project seems to have the same common goal of delivering a project safely, on time and under budget. I very much appreciate and applaud the partnering effort being displayed thus far on this project."

Multiple sites were established with the opening of the road work end, with crews preparing the median and constructing the two northbound new lanes. The reconstruction of the southbound lanes will start once the new ones are completed.

"We kind of started in the middle because we had some permit issues," said Brian Coblentz, HEC's project manager. "The drainage crews are working north and south. The various crews do not overlap and stay ahead of each other — they're working in a linear fashion."

Clay and soil issues have been a challenge.

"The clay absorbs water and is not easy to work with," Coblentz said. "There's a lot of fine materials and they clump up, and in certain areas you can't use high plastic material with the drainage or the roadway. We've got a continuous 1.5 miles prepped for fill-in, subgrade and base. We had to jump on the roadwork first because a lot of the areas where the drainage is going needed fill or the pipe would be above ground and exposed." 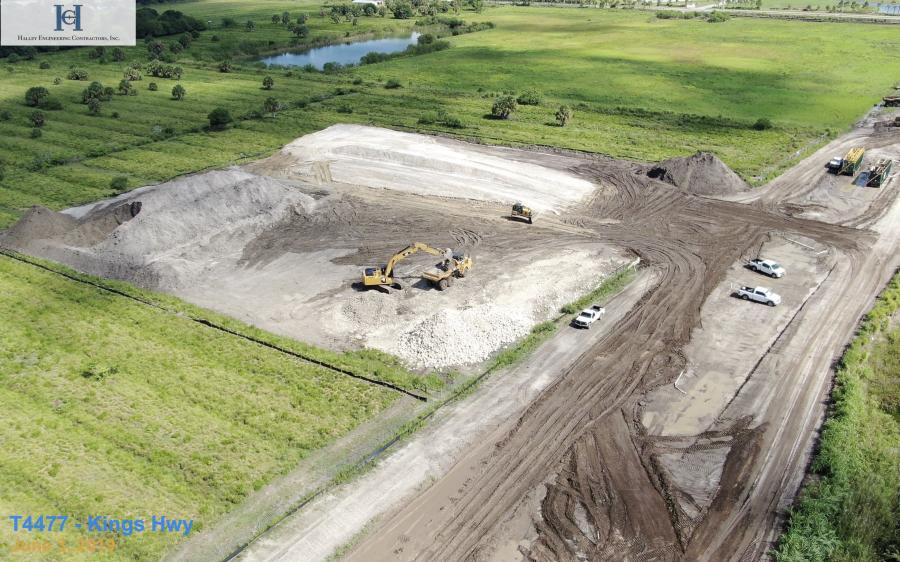 Work on Canal No. 40 began at end of April, with about 700 ft. dug. Both new canals will be about 16 ft. deep. The existing canals will not be drained until the new ones are completed. The new canal is about 100 ft. west of Canal No. 40.

While the diversion of the water from the existing canals to the new ones is still being determined, FDOT is cooperating with environmental agencies regarding wildlife that will be displaced via the canal construction, which includes the gopher turtle and the eastern indigo snake – a native to the area.

Material excavated for the new canals will be used to fill the old ones. This material is being stockpiled for the operation.

The new lighting systems, signalization, vehicle detection devices and ITS cameras are being installed for the new road section, with similar work to occur on the other side as existing lanes are replaced.

"Six of the 10 drill shafts for this infrastructure have been prepared," Coblentz said. "Our subcontractor was proactive. The other four will be done in the last phase." 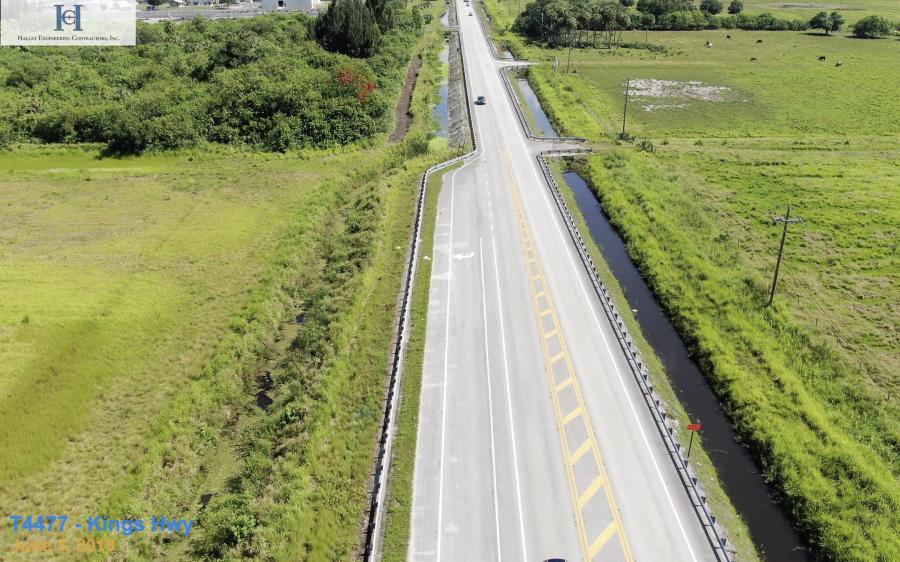 If possible, materials from the existing lanes will be sent to recycling centers.

Many of the wear and tear issues revolve around the material that is being removed that can get into the equipment, along with moisture from rain.

"Once the equipment is in the water and the mud, with the combination of the rain and the clays, it's difficult to drive through, Coblentz said. "Some of the track equipment gets stuck, and there is only so much you can do when it's a muddy mess."

Some of the subcontractors have onsite mechanics, and HEC brings them in when needed. HEC purchases and rents equipment from dealerships such as Ritchie Bros., Kelly Tractor, Dobbs Equipment, Meco Miami and Flagler Construction Equipment.

"We maintain close relationships with our equipment dealers," said Michael Halley, P.E., HEC's senior vice president, "and we speak with them on a weekly basis regarding equipment performance, maintenance and repairs. This is important as it builds trust and allows for issues to be resolved in the most efficient manner."

With more than two years before delivery, Coblentz is satisfied with the progress of the work.

"It's all about not doing things twice and having a good plan before you start anything," he said. "As far as morale, it's just being positive. We all know how we don't like being talked to. It's a matter of respect and that comes with my military background — treat people as you want to be treated." CEG