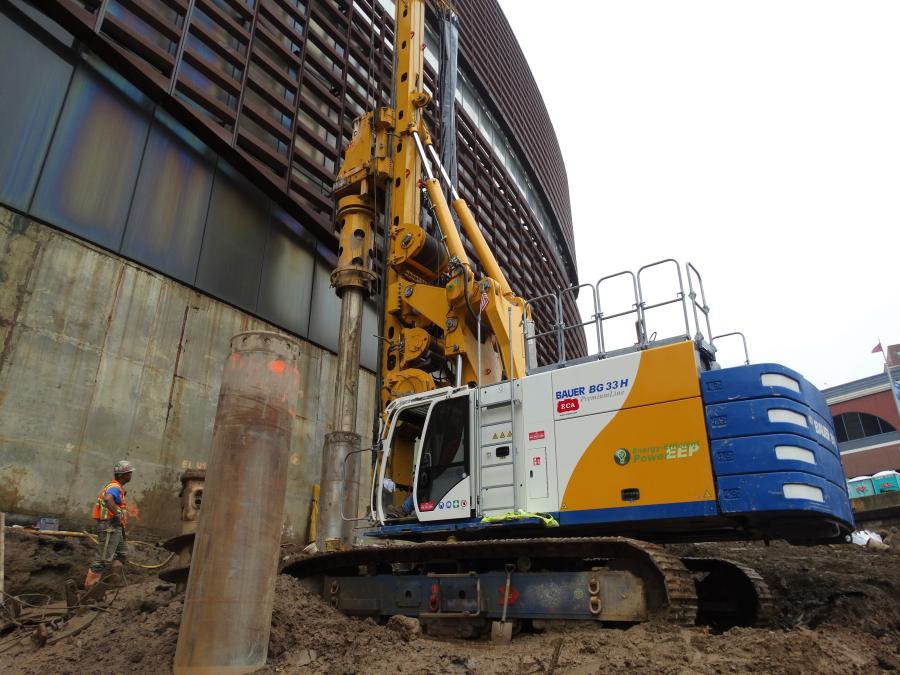 Urban’s Bauer BG drilling rigs extracted cores of up to 4 ft. in diameter while drilling into a multitude of 10- to 20-ft. boulders from 16 to 25 ft. below grade.

Two yellow masts peek high above the jam-packed city streets of Brooklyn, N.Y. While it was not obvious to passersby, Urban Foundation/Engineering was using two Bauer BG drilling rigs from Equipment Corporation of America (ECA) to literally conquer an underground boulder field in preparation for a 25-story residential building known as 18 Sixth Avenue.

The tower — the tallest of 15 buildings planned for this trendy mixed-use development — will top out at more than 500 ft. It sits at the intersection of Sixth and Atlantic avenues adjacent to the Barclays Center indoor arena. 18 Sixth Avenue will feature more than 800 mixed-income housing units stacked upon a ground-floor with retail storefronts.

Urban runs some other brands of drilling rigs and even manufactures some smaller machines in-house. The contractor recognized early on that 18 Sixth Avenue would require the kind of torque and capabilities that none of its fleet possessed.

Urban purchased both the BG 28 H and BG 33 H from Bruce Langan of ECA's New York/New Jersey branch after a short rental period. It had done the same with a BG 24 H before that. The powerhouse BG 28 H and BG 33 H rigs deliver 277 kNm and 342 kNm of torque, respectively. 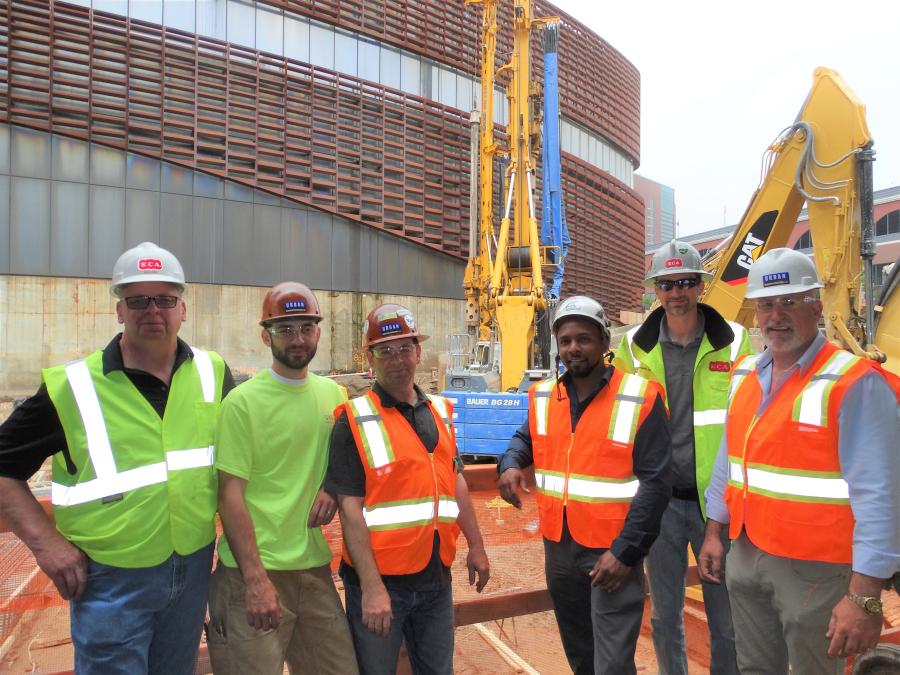 Urban, founded in 1965, specializes in deep foundations, Support of Excavation (SOE), and moving buildings throughout the five boroughs of New York. What makes the company unique is the seven licensed professional engineers including Project Manager Edward Watson, that provide deep expertise in geotechnical and several other engineering disciplines.

"The U.S. Geological Location here is based on the Glacial Till," he said. "There are a lot of boulders on this site, which is why we have the Bauers."

Brooklyn, like most of New York City, was affected by the glacial till during the ice age. The boulders remained from the movement of the Laurentide Ice Sheet in the last glacial period, which covered New York City with thick ice and helped to shape most of North America, according to JF Petak Science Books.

Urban's General Superintendent Mike Danna recalled an SOE project at nearby Atlantic Yards many years ago where similar ground conditions nearly brought construction to a halt.

He was confident this wouldn't be the case at 18 Sixth Avenue.

"The guys know pretty much the rock in every neighborhood," said Danna. "They know what to expect and that gives us a little edge."

The fact that the Bauer BG rigs require no water to drill was critical as well, especially on this waterlogged site.

"When you introduce water, it's a nightmare to move the equipment and it drives up hauling costs. Using the Bauers just makes life easy because it is a dry process," Watson said.

Getting the Rigs to the Site Safely

The site was just under an acre and crowded with rolling heavy equipment and clusters of workers. Getting the Bauer rigs safely down into the excavation was a challenge, especially after a wetter than usual spring. 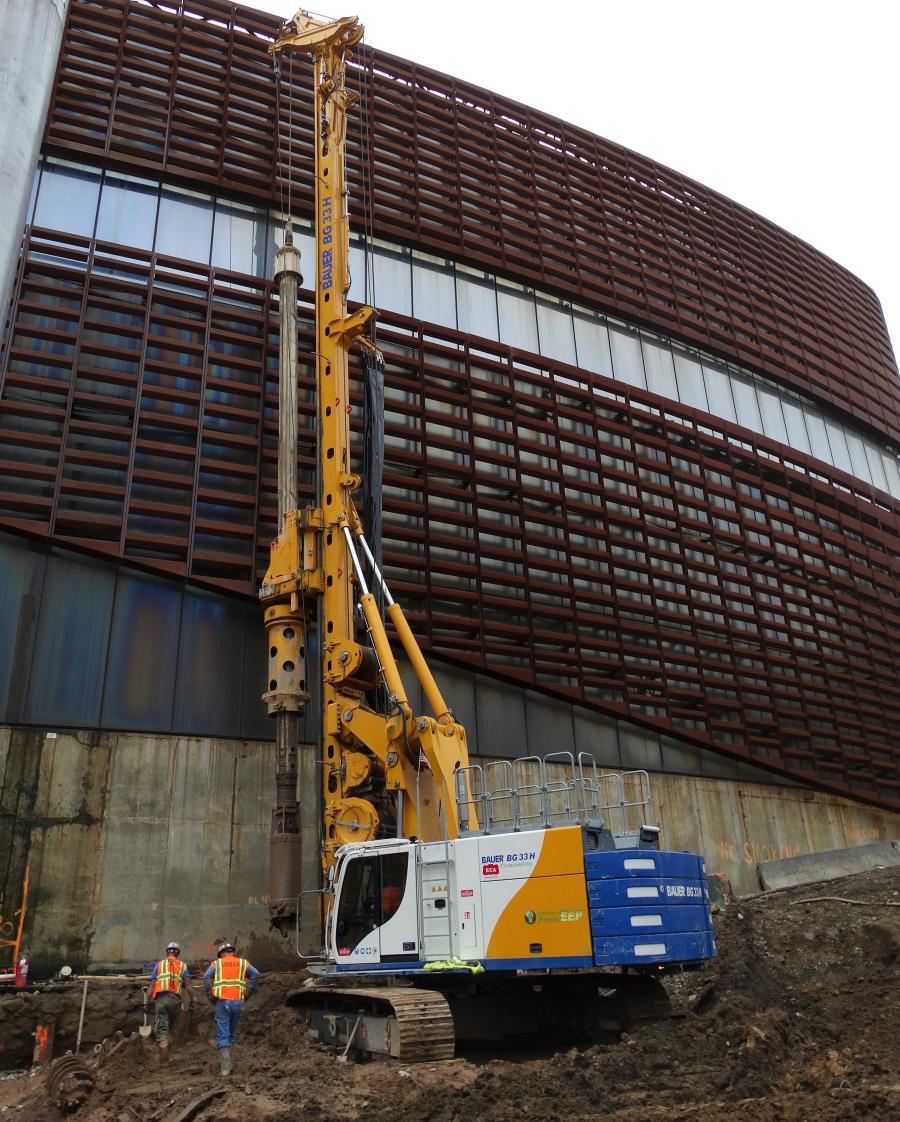 Urban was unable to bring the rigs in through the adjacent Atlantic Yards property so it was forced to build ramps and crawl the machines down into the excavation. On a site littered with puddles and mud so thick it could swallow up a work boot, it was no surprise to Urban when one of the rigs started leaning. It responded immediately by placing the BG 28 H and the BG 33 H on pontoons.

One learning curve for Urban's operators was allowing the Bauer rigs to do the work.

"Our operators were used to drilling and pushing casing down as hard and fast as they could with other machines," Danna said, describing how the tracks of the rigs literally came off the ground. "They didn't understand the concept of sitting back and letting the machine do the work; you don't need to use brute force with the Bauers."

The heavy concentration of subgrade boulders and the proximity of the Barclays Center also required Urban to use rigid inclusions elements (RIEs) for the foundations. Drilled shafts, driven piles and continuous flight auger (CFA) piles were not an option.

"We have to case the holes with RIEs," said Watson. "It's definitely a challenging job because of that, but the Bauer rigs are doing awesome."

The majority of the tower will sit on a standard mat foundation except for areas with low bearing material including loose sands. The RIE's transfer the load from the building to the densified layer of sand. Most were concentrated in the core of the foundation, which will support shear walls and high-capacity columns.

"When you're drilling RIE's, the most important thing is to get the right location," said Watson. "Then it's just setting up the rig and getting the drilling tools and the casing set up."

Drilling through large boulders is not only hard on the rig, but also the tooling. In fact, Urban started the project with another brand of drilling tools and broke every one. 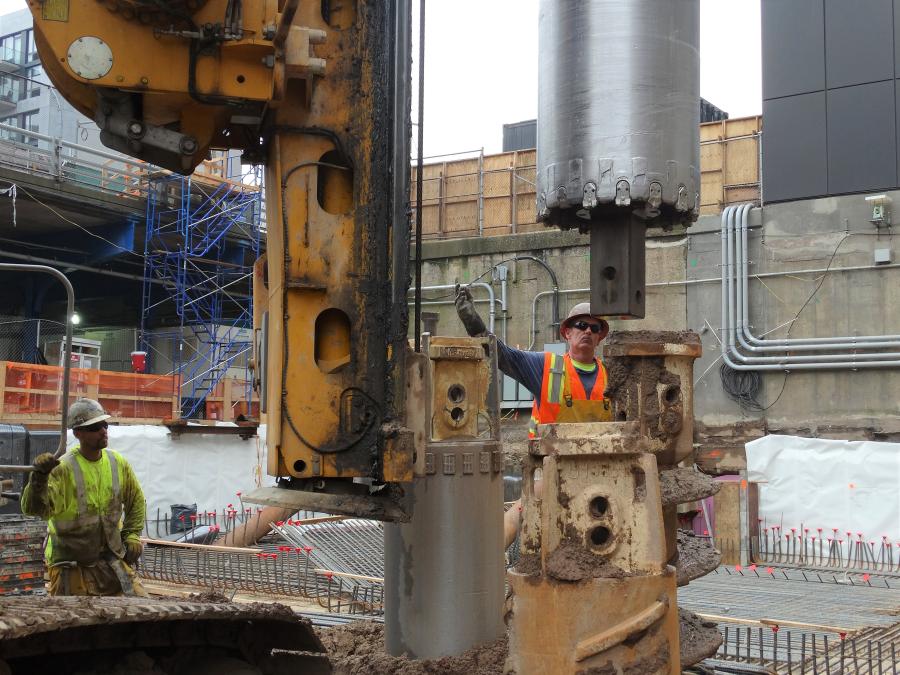 Urban went back to ECA and acquired Bauer double wall casings, an SBF-P2 progressive auger, and a KR-R core barrel with round shank chisel. No tooling issues were experienced from that point on.

Despite switching to sturdier Bauer tools, Urban was forced to make frequent adjustments and switch out drilling tools because of the challenging subsurface conditions.

"This whole set up is designed to be cased all the way down to the densified layer so it's a long process trying to get 60 feet of casing through boulders," Watson said. "It took multiple uses of tooling just to advance to that layer."

The rigs started hitting 10- to 20-ft. boulders from 16 to 25 ft. below grade. The core barrel and auger were the primary drilling tools used, and the barrel was extracting solid cores of up to 4 ft. in diameter.

The deepest layer was a mixture of water-logged gravel and sand, which rendered the auger ineffective. Urban tapped a clean out bucket to remove the cuttings and ultimately finished the pile off with a concrete tremie pour.

Drilling Next to the Barclays Center

Casing twisted into the mud within a few short feet of the rusted steel façade of the Barclays Center on a sweltering July morning. ECA's Ulrich was perched on the tracks of the BG 33 H adjusting the tooling and collaborating with the operator. 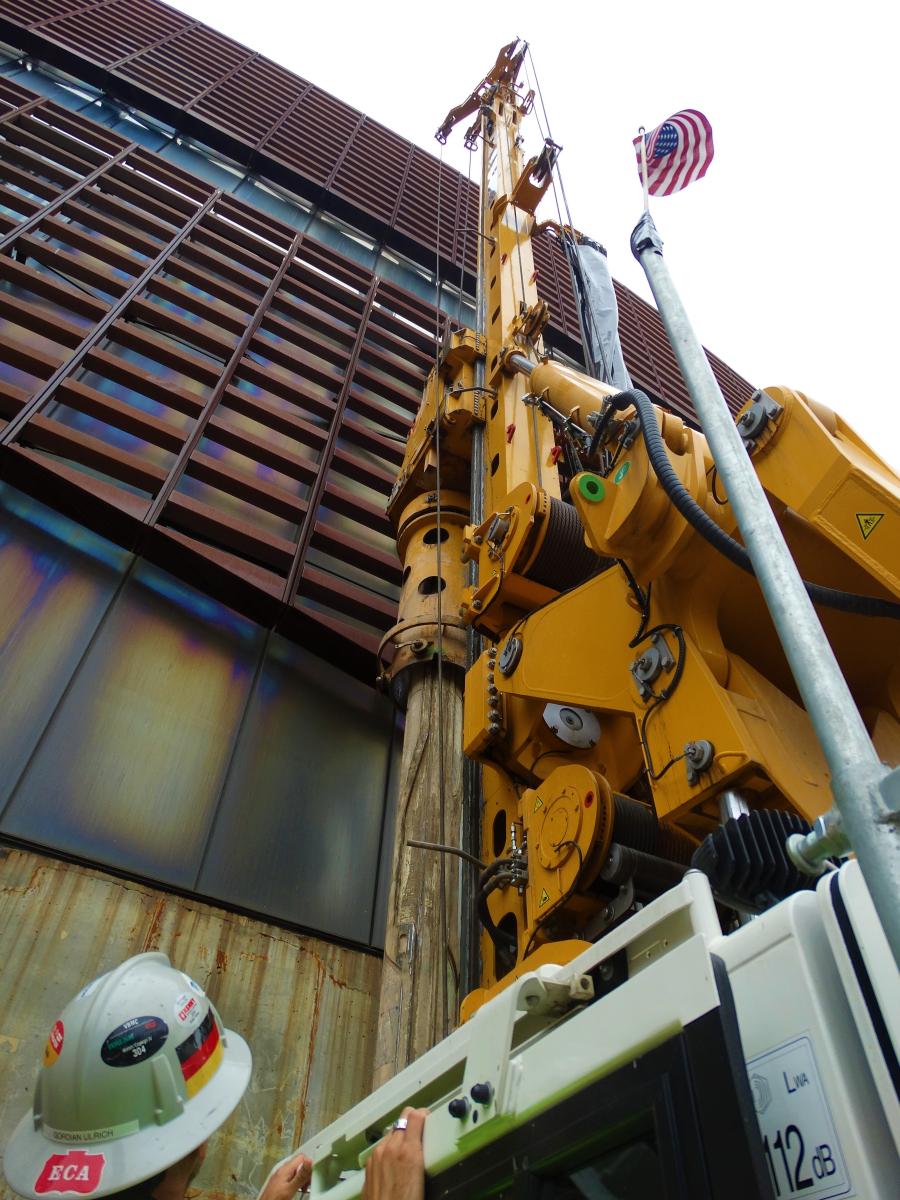 To be exact, Urban was drilling 5-ft. 3 ½ in. from the building. A pile was moved roughly 7 in. from the center to avoid dealing with temporary sheeting that had been installed around the indoor arena's foundation.

The use of Bauer casing also proved beneficial while working in proximity to the isolated footings of the Barclays Center, according to Watson.

"The drilling is cased so you don't really impose too much influence on the adjacent building and it also keeps everything around it densified so you don't undermine the existing foundation elements," he said. "This is one of the benefits of using Bauer segmental casing in these situations."

Despite the challenges of working in proximity to the Barclays Center, Danna recalled a top-down construction project at The Chapin School in Manhattan where Urban's skills were put to the ultimate test. The crew built a basement slab while school was closed for the summer. They returned when school opened, excavated the foundation below, and transferred the loads between the building's columns.

"We did the work while the kids were in class," Danna said. "The concrete work was beautiful and there was almost zero settlement of the structure once the new foundation was in."

Once the holes were bored, Urban used the tremie concrete pouring method to install 65 grout columns. This was an ideal solution because of the presence of the boulders and the proximity of the Barclays Center.

"You still get the compression strength you need and there's not a whole lot of tension," Watson said of the grout columns. "It's pretty much transferring the load from a column to the densified layer. 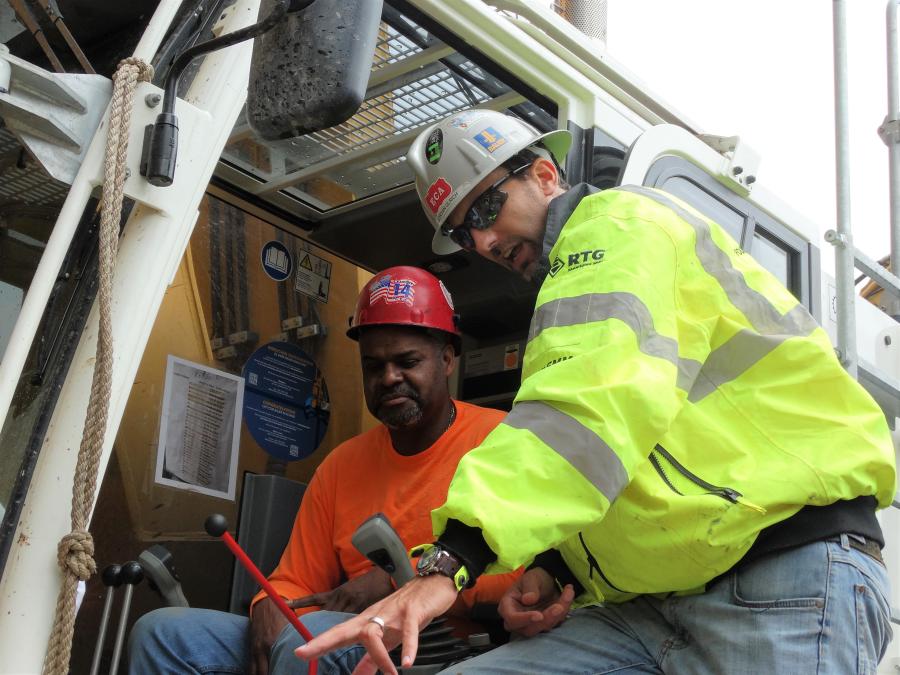 "It's not something that's normally done, but in this case you have a large structure and your mat is not going to be distributing the load evenly. You need something to offset that differential settlement that you can use like a shaft."

The design called for 6,000 psi grout, but Urban's tests showed readings of up to 10,000 psi. A high-strength concrete supplemented by CP2 superplasticizer lowered the water content and accelerated curing time, resulting in strengths of 5,000 psi within seven days.

"The plasticizer lowers your water content and also increases the strength, which is something you need on this project because we want the grout to set up immediately," said Watson. "And at Urban, we run through foundations pretty fast."

The successful completion of the 18 Sixth Avenue project was a testament to Urban's drilling production. Urban started work in April and completed the project on time in August. A pair of Bauer rigs and tooling just might have played a key role as well.