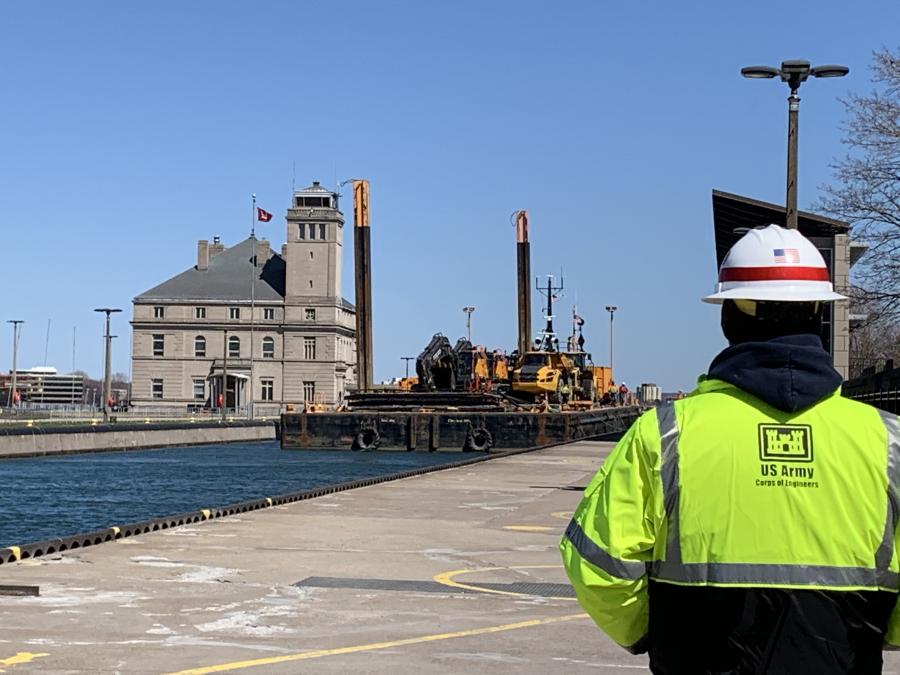 The New Lock at the Soo project is on schedule as construction for phase one of the project is under way. Trade West Construction Inc. began to move equipment to the site on May 4. (USACE photo)

The U.S. Army Corps of Engineers (USACE), Detroit District, announced that the New Lock at the Soo project is on schedule as construction for phase one of the project is under way. Trade West Construction Inc. began to move equipment to the site on May 4 and will begin deepening the upstream approach to the locks in the north canal.

Phase one of the project, upstream channel deepening, will facilitate the construction of a new Poe-sized lock in the place of the existing Davis and Sabin Locks. This work is expected to be complete in November 2021.

"It's incredible that we're starting this construction a year earlier than even the most optimistic projections when the project was reauthorized in 2018," said Lt. Col. Gregory Turner, commander, USACE, Detroit District. "Getting the first phase started sets the conditions for the project's ultimate completion."

The three major phases of the project remain on track with their timetables virtually unaffected by the coronavirus pandemic at this time. Phase two involves rehabilitation of the upstream approach walls, which will stabilize the existing approach walls to allow for modern vessels to tie up and wait their turn to pass through the new lock. The third phase, construction of the new lock chamber, will include rehabilitating downstream approach walls and is nearing its 70 percent design milestone.

The Soo Locks are situated on the St. Marys River at Sault Ste. Marie, Mich., and allow vessels to transit the 21-ft. elevation change at the St. Marys Falls Canal. More than 85 percent of commodity tonnage through the Soo Locks is restricted by vessel size to the Poe Lock. This new lock project will construct a second Poe-sized lock (110 by 1,200 ft.) on the site of the existing decommissioned Davis and Sabin locks. According to a 2015 Department of Homeland Security study on the impact of an unexpected Soo Locks closure, the Soo Locks are nationally critical infrastructure and the reliability of this critical node in the Great Lakes Navigation System is essential to U.S. manufacturing and National Security.