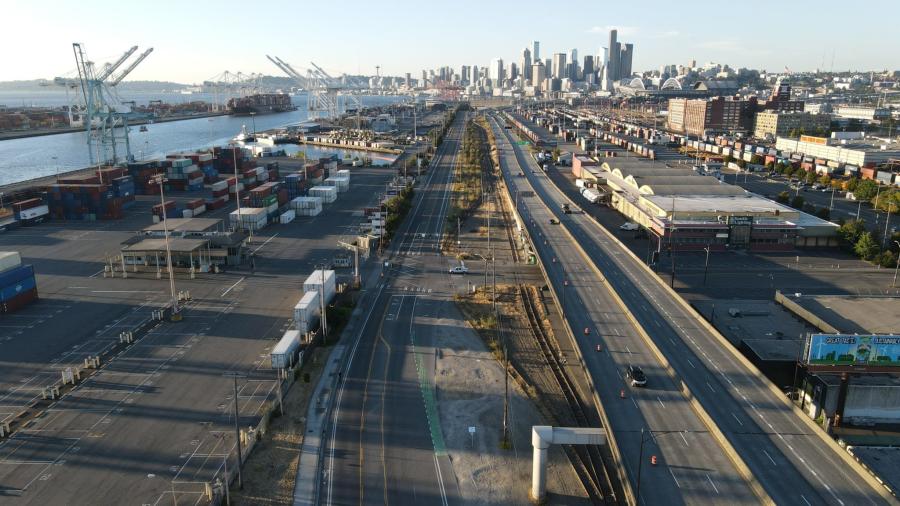 Under the Biden Administration, the Seattle Department of Transportation has now received more than $135 million in federal funding for key city projects.

After significant advocacy by local officials and advocates, U.S. Sen. Maria Cantwell announced that the East Marginal Way S Corridor Improvement project was awarded $20 million from the U.S. Department of Transportation's Rebuilding American Infrastructure with Sustainability and Equity (RAISE) grant program. The RAISE grant will help improve mobility and safety along Seattle's most important freight corridor as well as boost the regional and state economy. Funds will help people who drive, walk and bike travel safely to industrial and maritime jobs as well as employment sites in downtown Seattle. Improving this highly-traveled multimodal corridor will also help accommodate larger and heavier truck traffic into the Port of Seattle and other maritime facilities.

This $20 million RAISE grant awarded to the East Marginal Way S Corridor Improvement Project will fully fund the project and allow construction to start at the end of 2022. Project completion is estimated for 2025. The grant funding will enable crews to do both the safety improvements and the road reconstruction at the same time. This means that there will be fewer disruptions to freight traffic during construction.

"With East Marginal Way S greatly deteriorated and congested both by freight traffic and residents impacted by the closure of the West Seattle Bridge, this project will give this critical freight corridor a much-needed facelift," said Sen. Cantwell. "It will allow East Marginal Way S to handle heavy truck traffic between port terminals, SoDo railyards and businesses, and I-5, reducing congestion in SoDo while providing a direct connection to the newly renovated Terminal 5 via the lower West Seattle Bridge."

The RAISE grant will now help improve operational and safety deficiencies by widening and strengthening the road to accommodate larger and heavier truck traffic, provide access to freight terminals at the Port of Seattle for the trucks that use the corridor each day and helping to reduce congestion with improved traffic signals.

Below are some of the improvements in the East Marginal Way S Corridor Improvement project:

The East Marginal Way S Corridor Improvement Project was identified as a priority by Seattle voters when they approved the 2015 Transportation Levy to Move Seattle. Through this property tax measure, Seattle residents are setting aside $7.1 million for the project. These commitments reflect the importance of this project to our economy, family wage job creation and improved safety in the corridor. The project also has received funds from the Port of Seattle, Washington State Transportation Improvement Board and the Washington State Freight Mobility Strategic Investment Board.

As Seattle grows, improvements to freight mobility are essential to promote regional and international economic competitiveness. It also is a designated Heavy Haul Route, critical last-mile connector and vital route for over-sized trucks or those carrying flammable cargo. In addition, the corridor provides a major connection for people who bike between the West Seattle Bridge Trail, downtown, and the SODO neighborhood.