The accident highlights safety concerns during a construction blitz ahead of Summer Olympics. 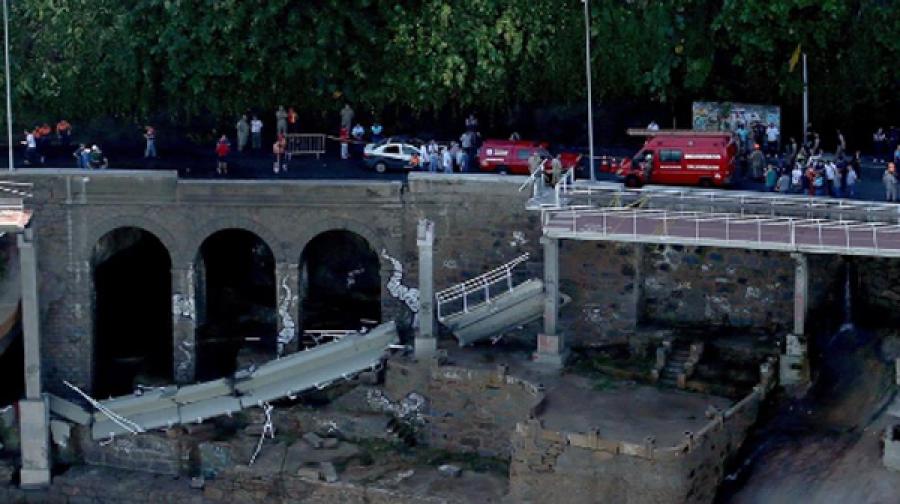 Officials didn't give the reason for the collapse. But local media reported that a large wave had struck the bike path, which rests on concrete pilings planted on a rock face rising from the sea. The force of the water apparently knocked a roughly 80-foot section of the bike path off the pilings, and it fell 15 feet or so onto the rocks.

Rio de Janeiro has been beset by a growing number of challenges as it prepares to receive hundreds of thousands of visitors for the Olympic Games. Though the bike path isn't directly related to the event, it formed part of a broader effort to spruce up Rio's image ahead of the megaevent.

Live television images broadcast Thursday afternoon showed large waves repeatedly reaching the pillars supporting the structure and, at times, surging over the road alongside unharmed sections of the path.

Rescue workers said they pulled two bodies from the water. A city official, Pedro Paulo Carvalho, said in an interview with Brazil's Globo news network at the scene that rescue workers were searching for a third possible victim, and a helicopter, jet ski and boat were seen scanning the churning sea.

The accident, which occurred less than four months after the bike path along winding Avenida Niemeyer was inaugurated, raises questions about the integrity of construction projects being built at breakneck speed across Rio de Janeiro ahead of the Olympics in August

Although most of the official Olympic projects are completed, Rio de Janeiro has had to scramble to get dozens of sports venues and infrastructure works ready for the Games. A new subway line expected to transport thousands of visitors daily to key Olympic sites isn't expected to be ready until July.

Thursday's disaster wasn't the first time a new project failed ahead of a major sporting event in Brazil. In 2014, when the country hosted soccer's World Cup, a recently built highway overpass collapsed onto a bus in Belo Horizonte, killing two.

The latest accident touched a nerve with many Brazilians who have grown suspicious of the nexus between public contractors and the government after a massive corruption investigation at Rio-based state oil company Petróleo Brasileiro SA, or Petrobras, uncovered evidence of pervasive graft among Brazil's top construction companies.