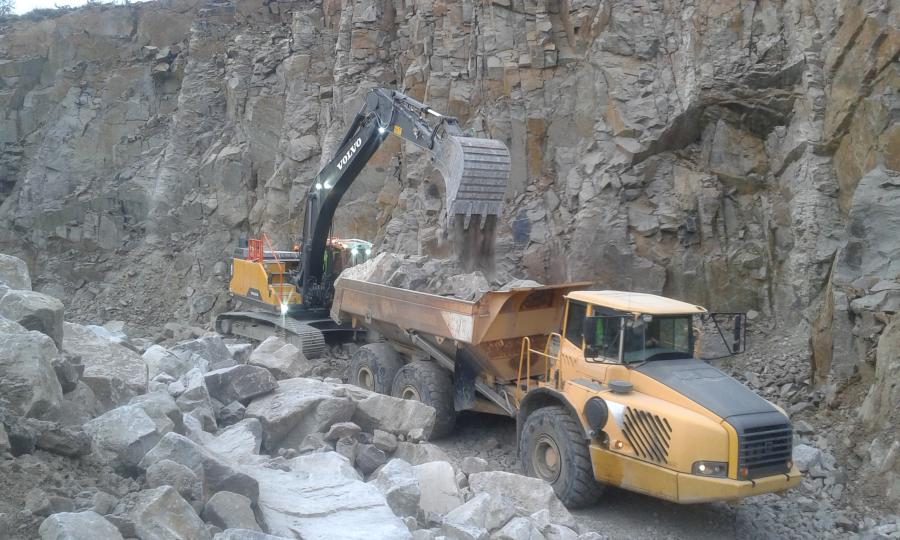 Swecon prepares the ground for the massive Road to Rock arena on a former quarry in Torsby, Sweden.

The World Rally Championship (WRC) is recognized by the International Automobile Federation as the highest class of international rallying, widely referred to as one of the most strenuous driving competitions on the planet. From the snow-capped Argentinian mountains to the evergreen Swedish forests, the WRC spans 13 races in as many countries; each unique, offering its own challenges, but all placing extreme demands on the drivers, cars and teams.

Rally Sweden – the only winter race on the circuit – is the largest annual event in Sweden. The three-day event, which is held every February in Värmland, attracts more than 200,000 spectators and nearly 100 million TV viewers worldwide. This year, from 9th-12th February, over 100 teams set off in Karlstad, racing along 331.7 km (206mi) of winding, icy terrain before completing the circuit back where it began.

To provide spectators with an awe-inspiring view of the race, there are four arenas located at key points along the route. This year, Rally Sweden enlisted the help of Volvo Construction Equipment.

(CE) dealer Swecon to construct its headline arena –Road to Rock – and it didn't disappoint.

Swecon has acted as Volvo CE's sole dealer in Sweden since 1999. The dealership employs around 450 people and 200 service technicians across 41 locations, from Staffanstorp in the south to Kiruna in the north.

“We've supplied machines to load and unload when the teams come to the service park and even orchestrated a machine display in front of approximately 10,000 people last year, which received a lot of positive feedback,” says Fredrik Rigö, market communications manager for Swecon. “For the 2017 season, we decided to take our involvement a step further by becoming the Arena Naming Partner. Rally Sweden was keen to use a Swedish brand for the construction work, and with Volvo CE being the number one brand for construction equipment in Sweden, Swecon was the natural choice.”

When Rally Sweden announced its decision to convert the Torsby quarry into a permanent arena, Swecon was up for the monumental challenge. “The opportunity to integrate our industry with such an impressive sport, and in such an organic way, was too good to pass up,” says Rigö. “We had essentially been given the chance to take the WRC into our backyard and make it our own! When we initially looked at the quarry in October 2016, it was full of huge rocks. Quarry blasting created a lot of debris that needed removing before we could even think about creating the arena.”

The track was designed together with Rally Sweden to ensure all the angles were correct and that the two signature jumps were safe. A team was formed, consisting of engineers, rally experts and Swecon's product specialists, including demo operators, who were responsible for project managing the track.

Swecon provided a fleet of excavators to create the track, including an EC160E, EC220E, EC250E, as well as an L150G and an A35D articulated hauler to ferry away the burden. A fleet of Volvo wheel loaders, comprised of an L50G, L60H, L70H and L90H, were also used to assist the three other arenas with snow removal and maintenance. During the event, a range of Volvo machines, including the EC750E, EC480E, EC380E, EC300E, EC250E and an A45G were on display in the Road to Rock arena. The machines put on a spectacular show for the spectators as they waited in anticipation for the rally cars to enter the stadium.

The construction of the arena was carried out by an unlikely team of operators. “We employed third-year students from nearby specialist tech school, Södra Viken to operate the machines,” says Rigö. “They have a Volvo EC140E and an EC160E excavator on operational lease, as many students study transport, construction or forestry. It was a great experience for them to be involved in an actual project – and you don't get much better than the WRC.”

“The machines performed to expectation, and we didn't encounter any problems during the project,” says Rigö. “This enabled us to transform a disused quarry to a showcase arena in a little over a month!” Work began in early November and ran until mid-December.

The one-of-a-kind Road to Rock arena held stages 8 and 18, the latter referred to as the 'Power Stage', which is situated just 500m (0.3mi) from the finish line. Due to the carefully planned layout of the arena, the thousands of spectators could witness the action for a prolonged period of time – approximately 45 seconds per team.

Following the highly successful race weekend, Rally Sweden stated that it is impressed with Swecon's achievements.

“We transformed the center of the quarry into a sort of VIP area, catering to around 600 customers and guests over the course of the weekend,” concludes Rigö. “We are looking forward to continuing our work with Rally Sweden in the coming years.”