When the Blue Jays wanted to switch to an all-dirt diamond, Verdi Restoration stepped up to the plate. 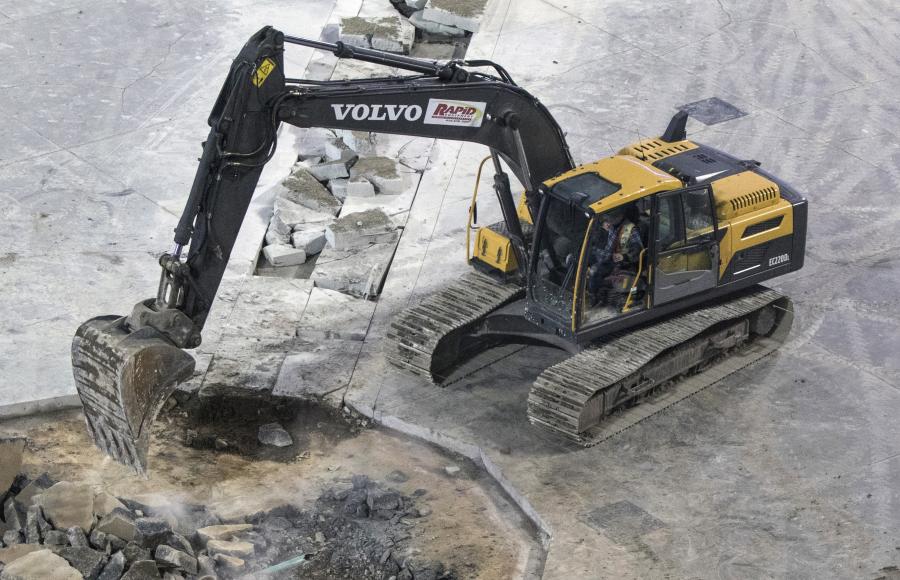 The Volvo EC220E makes light of the heavy-duty job, breaking up the concrete quickly and efficiently.

America's northern neighbor is known for the production of maple syrup and its passion for sports. Nearly half a century ago, the Toronto Blue Jays made a name for themselves as Canada's second major league baseball team, and up until the 2016 season, they were the only team in the league to play on an infield with artificial turf. But all changed in December 2015 when the Blue Jays announced they would get on base with the rest of the league by converting to an all-dirt diamond.

Stepping up to the plate to transform the infield was Verdi Restoration Ltd, a division of Verdi Alliance, which specializes in large-scale concrete restoration work. From heavy civil work to foundations and sealing, Verdi Restoration has a strong reputation of completing complex jobs with a level of precision few others can match.

It wasn't Verdi Restoration's first time up to bat at Rogers Centre, the home of the major league team — and the world's first retractable roof.

“I started working with Rogers Centre in 2007 when we waterproofed the concrete rails around the roof of the retractable dome,” said Vito Nardi, company director.

The project marked the beginning of Nardi's relationship with the Rogers Centre team.

“In our line of business, that kind of partnership means everything,” added Nardi.

The job involved excavating of the cement floor between the bases and throughout the infield, a total area of approximately 12,000 sq. ft. (1,115 sq m). But the real challenge was completing the job on a rigid three-week timeline.

Before the excavation could begin, Nardi had to find the right machines for the job. For that, he turned to a long-time and trusted colleague, Spiro Marinos, a partner at Rapid Equipment Rentals.

“After meeting and talking through the project details, we decided the job required a 20 tonne-class excavator, powerful enough to work with a 3,000 ft-lb Atlas Copco hydraulic breaker and get the job done on time,” said Marinos. “I steered him toward a Volvo EC220E because it was the best fit for the job.”

With 30 years' experience in the rental business, Marinos knows what works and what doesn't.

“I've experienced every brand of machine and every problem an excavator can have,” added Marinos. “I didn't make the recommendation for the Volvo machine lightly. I made it because over the years, our Volvo dealer, Strongco, has given us the support we need so that I can do the same for my customers. That, partnered with the excavator's capabilities, made it an easy choice.”

After measuring the perimeter of the bases, the work soon commenced — but there were some surprises along the way. As the excavation was approaching the third base, the Verdi crew encountered an unexpected section of concrete that was far deeper than they had anticipated.

“We suddenly hit a [5 ft.] stretch of concrete,” explained excavator operator Dietrich Meitsch. “Up until that point, we were only working with a concrete depth of around [12 in], at the very most.”

Curve balls like these can easily throw a project off-schedule, especially if the crew isn't equipped with the right machinery. Fortunately for the Verdi crew, the EC220E crawler excavator is designed to work with hard and heavy materials. With a bucket breakout force of 31,700 lbf (141 kN) and an arm tear out force of 23,380 lbf (104 kN), the EC220E offers the ideal combination of power and stability to break-up the concrete.

To Meitsch's surprise, the unexpected event resulted in a grand slam.

“The whole process of breaking and removing that extra concrete took less than an hour with the EC220E,” he said. “We kept right on schedule.”

The rigid design of the EC220E also helped the Verdi crew keep productivity high. Built with protected components, including a heavy-duty boom and arm, a strong frame structure and robust plate, the EC220E is made to sustain high machine uptime in demanding applications.

“Overall, we hauled away 50 bins of concrete, and we did it within the tight three-week timeline,” said Meitsch. “The EC220E was a huge contributor to our productivity. I was also shocked that the machine accomplished the entire job on less than one tank of fuel.”

The fuel efficient machine is powered by a 172 hp (128 kW) Volvo D6J engine that delivers high torque at low engine speeds. The hydraulic system, in combination with Volvo's advanced ECO mode, work in unison to reduce internal losses in the hydraulic circuit — resulting in improved fuel efficiency without any loss of performance.

“We were using it for eight-hour stretches at a time, almost continuously, but never had to refuel the [85 gal] tank on the machine,” Meitsch added.

Along with the Volvo EC220E, Nardi's team used two skid steer loaders to haul concrete to the trucks.

After Verdi Restoration had completed the concrete removal work, a layer of pea-gravel base and sand was laid down. On top of that, a clay-silt sand mix was added, to help retain moisture after pregame watering. The increased depth and extra sand mix makes for a more comfortable experience for the athletes, who were accustomed to artificial turf on a bed of concrete.

Reflecting on the project, Nardi acknowledged the importance of strong partnerships, particularly with Rapid Equipment Rentals, which provided the star player, the Volvo EC220E.

“I've known Spiro for a long time, and I trusted that his recommendation would put me in the best position to get the job done on time and budget,” said Nardi.

It's these sound decisions that kept the Verdi crew on time and under budget, and ultimately, the Blue Jays' new infield on track for opening day.