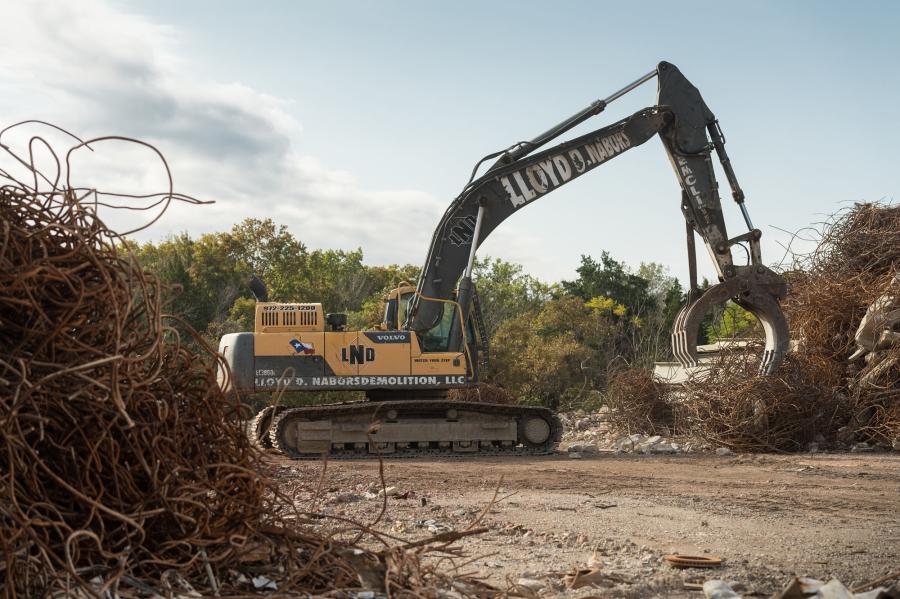 It might seem to many mothers that all 10-year-old boys try to wreck their houses, but for Texan Lloyd Nabors he really did — starting a lifelong love of demolition — assisted by his loyal gang of Volvo machines.

It's fair to say that Lloyd Nabors likes to tear things down. A lot. He was a young boy when he was first inspired to start his own demolition company. His father did demolition work and young Lloyd often helped out, starting around the age of eight. Helping dad was one thing, but what he really wanted was to work on his own. Nabors tells the story: “I said, 'Dad, I want to run a piece of equipment by myself'. He said, 'Well, when you're 10 years old, I'll let you wreck your first house.' So he turned me loose. I was running a wheeled loader and I got to wreck my first building when I was 10 years old. And I just loved it.”

Many years later, Nabors is the president of Lloyd D. Nabors Demolition, headquartered in Hutchins, Texas, just south of Dallas. Projects have so far taken him across Texas and into neighboring states, including Louisiana, Arkansas and Oklahoma. Nabors is still very hands-on with his machines.

Nabors said he was committed to the brand of machines he worked on as a boy. He first invested in Volvo construction equipment 12 years ago, after talking with a friend in the excavation business.

“He said, 'You need to try these Volvos, they're good machines'. He said his savings on fuel were tremendous. So, I said, 'Well, we'll give it a shot.' So, we bought one,” explained Nabors.

“He was the first contractor in the state of Texas to buy the high reach,” Walker said. The machine's flexibility was a strong selling point. With a modular joint system, the extended-reach arm can be exchanged for a digging boom as required. They've got it down to about a 45-minute process to do that, with one person,” he continued.

“That's a big deal because the old way would take two days to take the long arm off the machine. The versatility is amazing. The machine has paid for itself many times over. It allows them to go do jobs that they weren't able to do before,” said Walker.

Out of Harm's Way

In addition to the high-reach excavator's flexibility, Nabors appreciates its safety features.

“Our long-reach excavator helps us when we have a structure that is six or seven stories tall. It keeps our operator a safe distance away. We're able to reach up and demolish a building, and we can keep away from the structure when it's falling,” Nabors said.

The high-reach arm can take a shear or a hammer. This helps operators keep the job under control.

“We reach up there and cut the columns. We're able to pull them down and it's very professional,” Nabors said. “We used to use a wrecking ball, and it wasn't really controllable. You'd just knock a building down, and wherever it fell, it fell. We're able to control our demo much better now.”

VP Satterwhite agrees that safety and professionalism are core concerns.

“Texas happens to be a state where you don't need a license to perform demolition. So, you might get a few more cowboys who may have a pick-up truck and a sledge hammer and they're gonna go tear down an apartment complex,” Satterwhite said. “Our job is to make buildings come down, and we want to make sure we're doing it in a safe manner. We want everybody to leave the same way they came that morning.”

Citing Volvo CE's demolition package, which includes safety guards over the cab front, Satterwhite said: “It protects the equipment but, more importantly, it protects the person sitting inside the cab. If a piece of rebar comes flying out, you don't know if it will go left or right or straight up. Those guards have been phenomenal for us.”

The business of knocking down buildings includes many challenges that outsiders may not consider. Nabors uses drone cameras to help analyze each job site. Satterwhite said, complications take many forms.

“You don't know how a building may react all the time, especially if it's old or burnt or wind damaged from tornadoes. We operate with the understanding that anything can happen.”

“I enjoy seeing a blank piece of ground when we're all done and it's clean and there's grass growing on it. That's something we take pride in. Now that's set up for someone to do something great. We create a place where somebody can build something new,” he said.