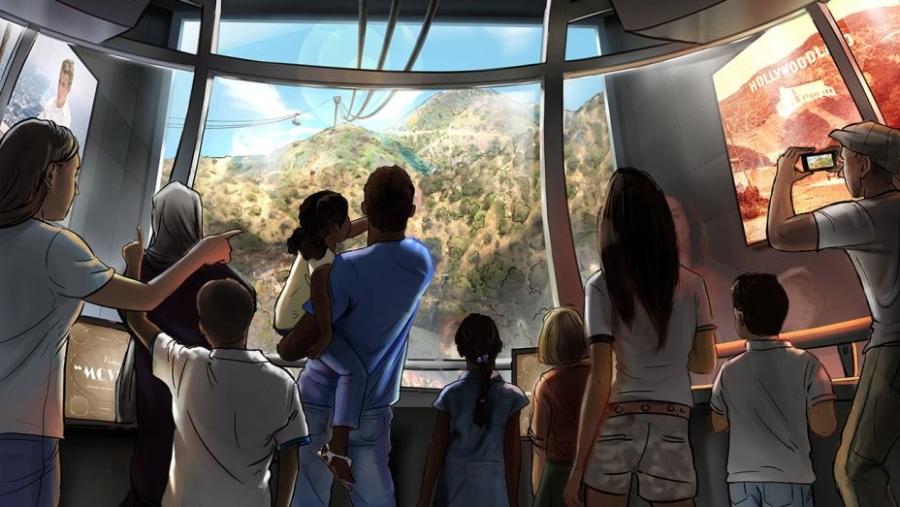 A rendering of the tramway.

Warner Bros. has announced its plans to spearhead the construction of the Hollywood Skyway, an aerial tram which will connect its Burbank, Calif. location to the Hollywood sign.

The $100 million, just-over-a-mile-long shuttle project, would get sightseers to and from the iconic sign in about six minutes a vast improvement on the long, traffic-plagued drive up Mt. Lee that visitors currently use, the Hollywood Reporter reported.

Warner Bros., which is now owned by AT&T, announced its plans to officials July 9.

“The Hollywood sign is an important historic and globally recognized landmark for the city of Los Angeles. The sign's fame, however, has created negative effects such as heavy traffic in adjacent residential areas and related safety concerns,” said a Warner Bros. spokesperson in a statement. “The concept of an aerial tram as a solution is one that has been suggested in the past and was most recently highlighted as a potential solution in the comprehensive strategies report by Dixon Resources Unlimited.

“We understand there are a number of possible solutions being considered, but we are confident the city's feasibility study will show our proposal to be the best option—an option that can be built and operated at no cost to the taxpayer and that will provide public benefit to the city of Los Angeles and its residents.”

Warner Bros.' location close to the sign's north side made the studio decide to be part a project that would have minimal impact on surrounding neighborhoods, as well as Griffith Park. Plans also include the construction of a visitors' center near the sign.

Right now, there is no word on how the studio would build the tram without disturbing the natural environment of Griffith Park, which contains mountain lions and gray foxes, but any plan would need the go-ahead from local organizations and environmental impact studies, the Hollywood Reporter reported. According to one source, construction could take around three years to complete.