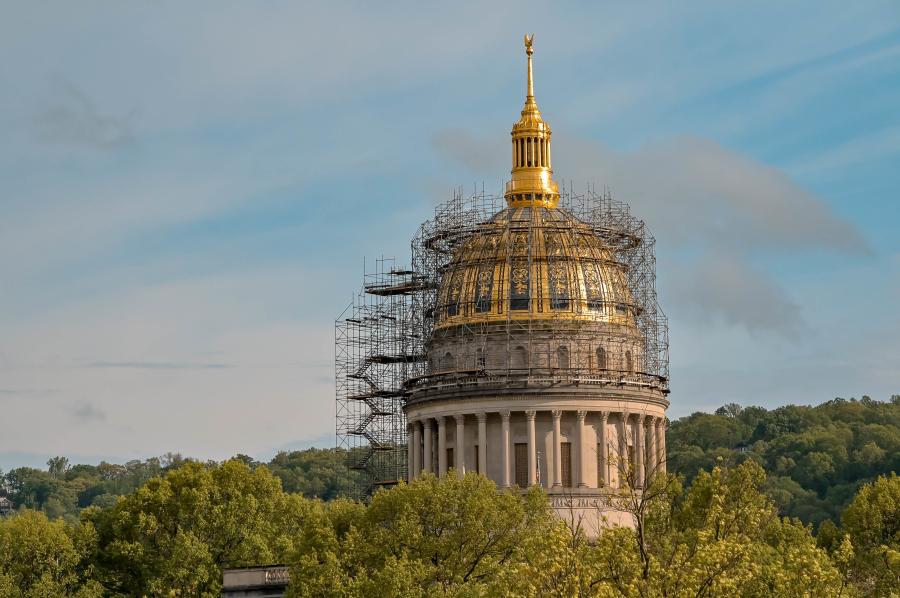 The iconic 292-ft.-tall dome has been hidden under scaffolding and wrapped in plastic.

By late spring 2021, work should be finished on a $15 million project to repair the water-damaged West Virginia Capitol dome in Charleston and install a new drainage system to mitigate future leaks, among other structural repairs.

Hidden under scaffolding and wrapped in plastic for the past year and a half, the iconic 292-ft.-tall dome slowly will return to public view, Gov. Jim Justice said.

"It's truly exciting that we'll see our beautiful Capitol dome highlighting the Charleston skyline once again," the governor said in a statement.

The project's completion will mark the end of a five-year saga that began in spring 2016, when General Services Division workers noticed peeling paint on an interior dome panel. The damage quickly spread to the entire panel. Suspecting a water leak, scaffolding was erected to allow access to the interior dome.

The state retained a consulting engineering firm to pinpoint the source of damage.

That report confirmed the worst fears — that a failure of the exterior dome drainage system was allowing rainwater to pour into the internal dome.

"The volume of water entering the building at this location is…leading to significant damage in the interior plaster at the Colonnade level," the report stated, "but is also splashing onto the plaster of the inner dome itself, which could lead to more interior damage to the inner dome plaster over time."

While General Services Director Greg Melton said he suspected a section of drainage pipe had been destroyed during an ice storm in late 2015, the report also found design and construction flaws uncovered shortly before the Capitol's 1932 dedication.

In correspondence with the original architect Cass Gilbert and then-Gov. William Conley, Capitol Building Commission representative Bonner Hill at that time raised concern over stone in the upper dome that had been improperly set and grouted, and improper installation of metal cladding for the gilding of the dome: "In other words, it's a rush job and does not fit properly," he complained.

As the state prepared to put the Capitol dome repair and restoration project out to bid, consulting engineer Rex Cyphers discovered an even more critical issue: The tensioning system — a series of 60-ft. steel cables that run from the exterior dome and hold up the interior dome — had failed.

Cyphers did not see a danger of imminent collapse, but he said the tensioning system needed to be replaced "as expeditiously as possible."

With that, the dome repair project took on extra urgency.

By spring 2019, exterior scaffolding began rising, featuring an elevator capable of lowering and raising massive limestone blocks at the base of the dome so they could be cleaned and repaired at ground level.

In addition to installing the new drainage system, exterior work has included repainting and regilding of damaged areas.

"I thank everyone who has worked hard on this project for so long to make this a reality," Justice said. "I know that all West Virginians are very excited to see the results."