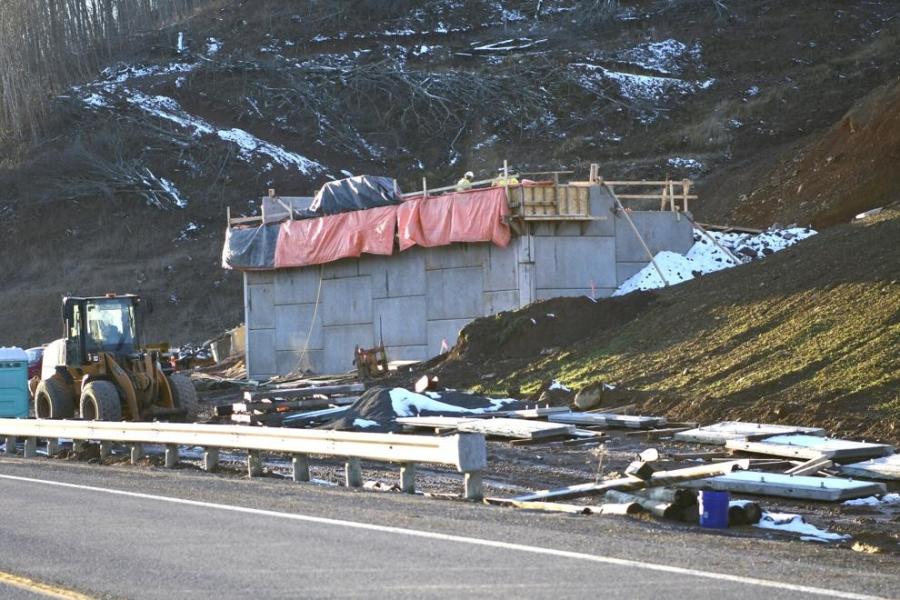 The $57 million project, which will link the existing twin Interstate 77 bridges at Stoney Ridge and the K.A. Ammar interchange with WV 123, is expected to be completed later this year. (Jessica Nuzzo photo)

Motorists who travel Airport Road near Bluefield, W.V., on a regular basis have been able to get a first-hand look at the ongoing construction of the King Coal Highway. They have probably also noted there has been a significant uptick in work in that area in recent weeks.

Construction on the new four-lane corridor's second bridge is now under way and visible to drivers as it is being developed off Airport Road. The structure extends over the Bull Tail Hollow Road area and is one of two that will carry traffic along the highway, with the second bridge being built in the Kee Dam area from U.S. Highway 460 to West Virginia Route 123, also known as Airport Road.

The $57 million project, which will link the existing twin Interstate 77 bridges at Stoney Ridge and the K.A. Ammar interchange with WV 123, is still expected to be completed later this year. Once the project is finished, it will create a usable segment of the future Interstate 73/74 corridor near Bluefield.

The current contract creates another 3.8 mi. of the King Coal Highway in Mercer County. That contract has a projected completion date of Oct. 31, according Joe Pack, the engineer and manager of District 10 of the West Virginia Department of Transportation's Division of Highways.

"That is our current schedule. There are different phases like anything you do," Pack recently told the Daily Telegraph. "We plan on having traffic on it this fall."

Once it is opened to traffic, the new road will provide improved access to the Mercer County Airport, plus add a new route to the Hatfield-McCoy Trail for all-terrain-vehicle tourists who travel to the region each week. For visitors who may be unfamiliar with Mercer County, the new direct route will help them get to their destination more easily, according to Jamie Null, executive director of the Mercer County Convention & Visitors Bureau.

"Any time you can provide a more convenient point of access to a destination, then you're meeting the needs for the visitor," Null said. "You want to make sure they have a convenient way to get to the trail system so they will return."

A lot of first-time visitors are unfamiliar with West Virginia's curving roadways. By making it easier for them to find their way, they are more likely to return, Null said, adding that first impressions start on the way to a destination.

County Commissioner Greg Puckett said he has been watching the highway project for decades.

"Right now, we've waited for 15 to 20 years to get it going, so seeing any updates is exciting," he stated. "Even though the King Coal Highway Authority has been dissolved, members of the coalition still talk now and then about its progress. It's a process where I'm honored to have been on the authority, and to see that progress is so reassuring so that southern West Virginia will be open for business."

The new highway will help expand possibilities for what the Mercer County Airport could do for business in the future, he stated.

"That's the whole point," Puckett said. "Any time you invest in infrastructure, it's a step forward for economic development."

Of course, once construction is completed on the latest contract, the pressure will be on area leaders — including those on the local, state and federal levels — to find additional state and federal funding to allow for a continuation of construction on this critical four-lane corridor for southern West Virginia.