Construction work is under way in rural northeastern North Carolina on the first utility-scale wind farm in the state, and one of the first in the southeastern United States. 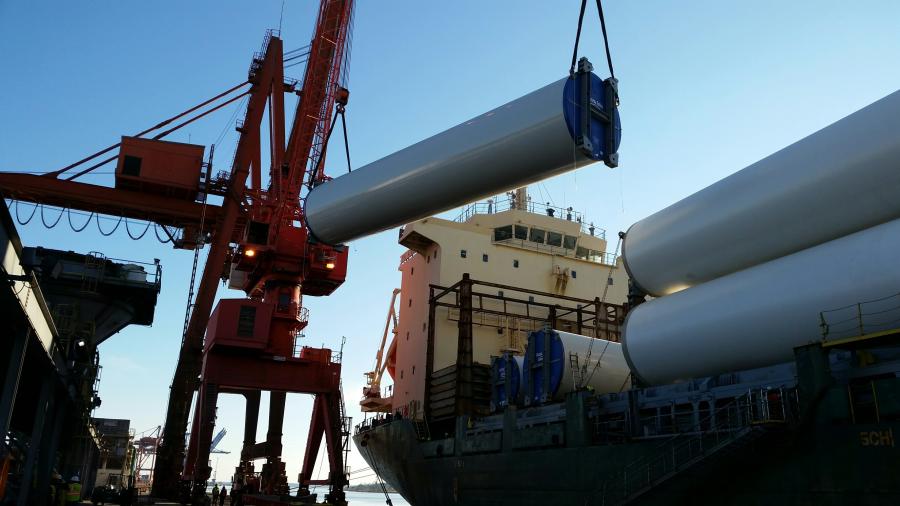 Construction work is under way in rural northeastern North Carolina on the first utility-scale wind farm in the state, and one of the first in the southeastern United States.

Construction work is under way in rural northeastern North Carolina on the first utility-scale wind farm in the state, and one of the first in the southeastern United States. If fully built out, the Desert Wind Power Project could deploy 150 wind turbines that would generate 300 megawatts of power at full capacity, and provide millions of dollars in tax and landowner revenue for years to come.

“We started developing this project in 2009, so it's incredibly rewarding to see the construction progress we've made since breaking ground last summer,” said Paul Copleman, communications manager, Iberdrola Renewables. “Wind turbine foundation construction is slated to begin in the next few weeks, so that will be an important step forward as we work toward bringing the state's first wind farm online by the end of the year.

“We're enjoying the fact the 18-month construction process generates business for local and regional companies. The long-term economic benefits of the project will be substantial, both for the participating landowners and the community, but it's also important to see that local workers and companies can benefit from the type of services a construction project of this scale requires.”

The total of landowner payments and taxes for the project will inject more than $1.1 million into the local economy each year, according to Copleman.

“The project has enjoyed a lot of community support throughout the lengthy development process. A handful of local and regional companies are supplying everything from gravel to fuel to food to hotel rooms to the busy construction site, which is expected to peak at around 250 jobs later this year.”

The wind farm project, featuring the private wind energy electric power generation facility, will be located in Perquimans and Pasquotank counties near Elizabeth City and Hertford on roughly 22,000 acres.

The first phase is a 208 MW project, featuring 104 wind turbines.

“Given the project's small footprint, much of the land will continue to be farmed for corn, soybeans and wheat, as it is now. The network of new roads, the operations building and the turbines' footprint themselves will take up less than two percent of the leased land,” said Copleman.

“The Amazon Wind Farm takes a significant step toward diversifying North Carolina's energy resources,” Gov. McCrory said to reporters. “Bringing onshore wind production to North Carolina is part of my 'all of the above' energy strategy. By diversifying our energy resources, we can provide affordable, reliable and secure sources of energy that are environmentally clean and safe.”

Copleman said, “We were thrilled with how the groundbreaking went this summer. The event reflected all the hard work by the landowners, local and state officials and our customer, which went into the multi-year process to bring the project this far.”

As a result of the building period, almost a dozen permanent jobs will be based at the wind farm when it's in full operation, currently scheduled for the fourth quarter of 2016.

“This project will deliver substantial and long-term local economic benefits,” said Wayne Harris, economic developer of the Elizabeth City and Pasquotank County Economic Development Commission. “Not only will it be the first wind farm in the state, it will be the largest taxpayer in each of the counties where it gets built and put money into the pockets of local working families.”

Copleman said, “We began the development and permitting process with our first meeting with interested landowners, and we broke ground this past summer. Most of the construction work to date has involved building the road network. Wind turbine components are slated to arrive in late May, and we plan to begin wind turbine erection in June.”

There will be no homes within the project's borders. Copleman called the location ideal.

“All successful wind farm locations combine a handful of important characteristics — consistent wind, access to the electrical grid, compatible geography and a supportive community. Thanks to improving wind turbine technology, we're able to evaluate areas of the country that we would have dismissed as not being windy enough five or ten years ago, so the technology improvements have opened up areas of the country like northeastern North Carolina for exploration.

“The area itself, known locally as the 'Desert,' is a great fit, as the flat topography, agricultural use of the land and sparse population lend themselves to building and operating a wind farm that will generate lots of revenue for the participating landowners and the community. The project will be on land leased from more than 60 local landowners, but the footprint of the final project will occupy less than two percent of that land, meaning the farmers get a flood and drought-proof crop to supplement their other crops.”

Copleman said a long list of local, state and federal agencies and departments reviewed various aspects of the project development, and ultimately approved it.

“Five years of permitting work have gone into this site. We study the wind, the ability to interconnect to the grid, the engineering to build the project, the wildlife and habitats in the area and many other characteristics of the site.

“This project was the first in the state to go through the process, so it took time and required patience, but in the end, we're building a high-tech project that will deliver an economic windfall to the farmers and the local community that will put a lot of people to work, which is why politicians across party lines have been supportive of wind power.”

The biggest challenge on the project has involved the sheer size of the task at hand.

“The development and construction of a wind energy project is an incredibly complex undertaking,” said Copleman. “The scientific analysis to piece together a site with 104 turbines involves meteorology, electrical engineering, civil engineering, biological studies, to name a few, and coordination with a large number of interested parties, starting with the landowners and the local community. It's taken a tremendously supportive community and landowner partners working with our incredibly dedicated and talented team to bring this project to fruition.

“Crews are building a network of approximately 60 miles of roads. That work continues, along with maintaining the roads we've already built. We've almost completed an area that will serve as a laydown yard and a concrete batch plant. We're building a substation to interconnect the eventual wind farm and the electric grid.”

So far, crews have not experienced any significant setbacks.

“It's been mostly road work for the past six months,” Copleman said. “The wet weather has posed some challenges.”

Iberdrola Renewables is a subsidiary of Iberdrola USA and the U.S. renewable energy division of parent company IBERDROLA, S.A., which according to the company, is the largest renewable asset base of any company in the world. Iberdrola Renewables is headquartered in Portland, Ore., and has more than $10 billion of operating assets totaling more than 6,000 MW of owned and controlled wind and solar generation in the nation. To date, it owns and operate wind farms in 18 different states.