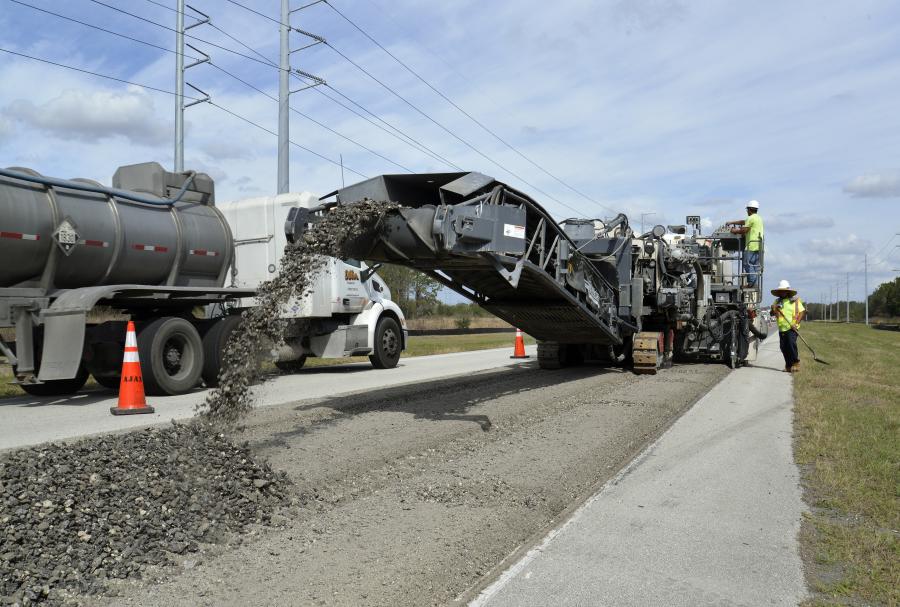 The Wirtgen 3800 CR prepulverizes Florida SR 37 in Polk County one lane at a time. (Wirtgen photo)

In the busy phosphate mining district south of Orlando, a two-lane blacktop road all but destroyed by trucks got a new lease on life due to the biggest full-depth recycling (FDR) and asphalt emulsion stabilization project undertaken to date by the Florida Department of Transportation.

Last year, a Wirtgen 3800 CR worked Florida State Route 37 in Polk County one lane at a time, followed by two WR 240i recyclers that further crushed and mixed the stabilizing agent.

This was followed by compaction by two steel-drum tandem rollers — a Hamm HD+ 120i VV HF and a Hamm GRW 280i pneumatic roller — in advance of an asphalt overlay provided by the general contractor, Ajax Construction.

Best of all — even prior to overlay — reclaimed sections were open to traffic each night, keeping trucks moving and commerce flowing.

"This project really is unique," said Tommy Donald, regional manager of Asphalt Paving Systems Inc.'s Zephyrhills, Fla., office. "That's because this is the first full-depth recycling project of this size -— 8.5 miles long — with that kind of square yardage." 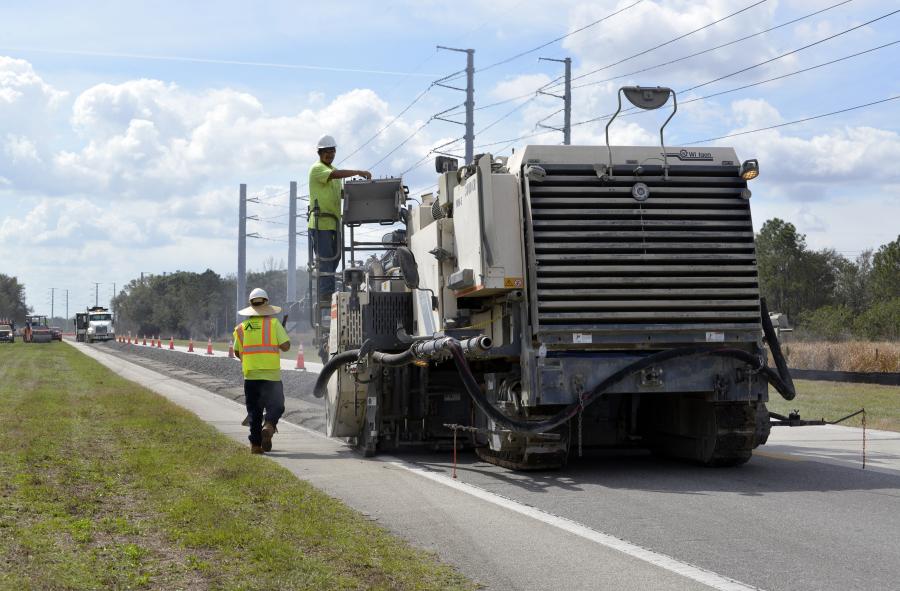 "We're using one of our 3800 CRs in downcut mode to break the pavement up for sizing," Donald said. "The pavement has 4 to 5 inches of asphalt on this section, and the rest is lime rock base. We're using the 3800 CR with the mold board up and running the conveyor out the back to pulverize 8 inches deep, mixing the old asphalt with the lime rock.

"Behind that we're spreading Portland cement, and behind that, we're using the two WR 240i reclaimers staggered side by side to mix it all together," he continued. "They're 8-foot-wide machines, so to recycle the full lane we are running them in echelon. This lets us complete a full lane in one pass with no need to back up. That boosts our production by not having to stop and remix another pass. It's one continuous motion."

The 3800 CR was producing a 3-in.-minus gradation as it prepulverized SR 37, leaving a windrow of coarser material on top of fines.

"Because the material goes around the head in a downcut motion, naturally the larger aggregate migrates to the belt, and the fines stay in the cut," Donald said. "While the material is segregated, that's not a problem because the reclaimers are coming right behind and mixing the coarse and fines together again."

That windrow of 3-in.-minus coarse RAP mixed with lime rock base then was leveled with motorgrader in advance of precompaction with the HD+ 120i VV HF. Cement was placed by distributor truck at a rate of 34 lbs. per sq. yd., mixed in by the WR 240i recyclers to a depth of 12 in.

APS was limited to 2-mi. lane closures and was required to open the recycled lanes to traffic each night.

"We are recycling a mile per day," Donald said. "Florida allows no more than a 2-mile lane closure at a time. So as we recycle two days at a stretch, we are producing a 2-mile section reclaimed 12 inches deep. This is opened to traffic every night. We prime it, seal it, stripe it and open to traffic."

Surface priming was done using CSS-1h emulsion cut 50:50 with water, and placed as a fog seal, which is defined as a light application of a diluted slow-setting asphalt emulsion. 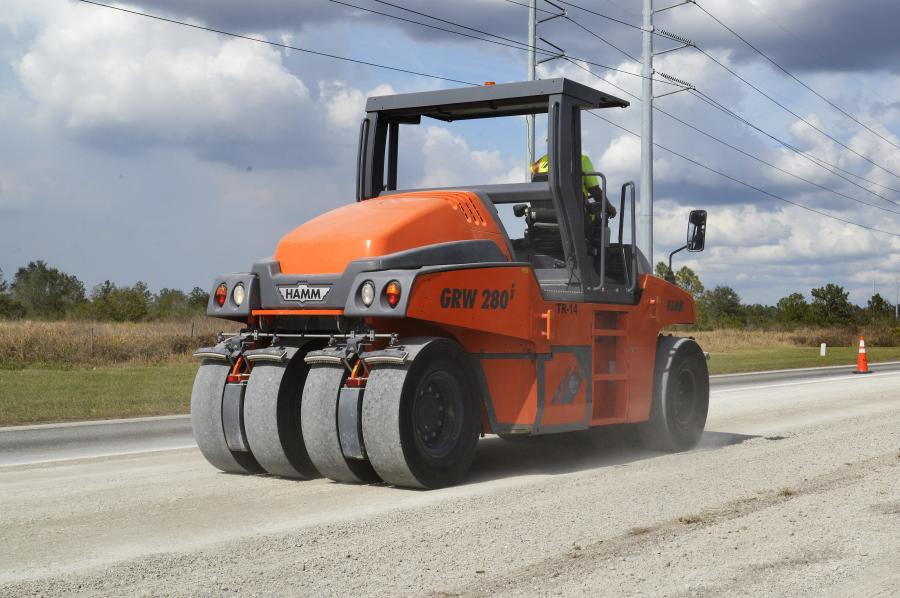 "It cures immediately and seals our surface in advance of the temporary traffic markings, allowing us to open to traffic in the evening," Donald said.

Finally, after two days, the stabilized material is trimmed in advance of paving.

"On the third day, we take the 3800 CR — now in milling mode — back to the beginning of the section and trim 1.5 inch off the top," Donald added. "This allows us to set grade and cross slope with the 3800 CR. Paving chases directly behind."

The stabilized material was compacted to 98 percent density by the tandem rollers — the Hamm HD+ 120 VV HF and finally the GRW 280i, or "traffic" roller as it's called in Florida.

Prior to paving, the prime contractor milled the shoulders, then paved all with fresh, hot-mix asphalt.

Super-strong, super-efficient FDR has proved itself a big advantage to the Florida DOT and its taxpaying motorists, providing a new highway at a third of the cost of conventional reconstruction, with much less environmental impact.

"When you look at the average daily traffic on this road, it's 90 percent trucks," Donald said. "We are surrounded by phosphate mines, and the wear of the trucks has forced the state to patch the road over and over and over again. To totally reconstruct the road, you'd have to mill out 12 inches of material, discard it, bring in new stone base, build the subgrade back up and put new asphalt layers on it. But we are rebuilding this road at a third of the cost of total reconstruction, in-place in a third of the time, with minimal effects on traffic and the environment." 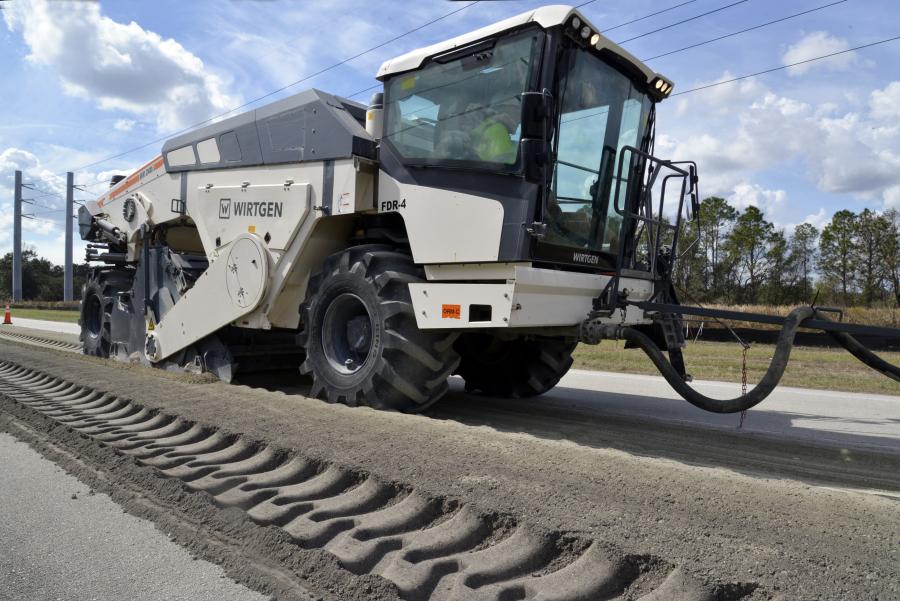 One of two WR 240i recyclers works in echelon to further crush recycled pavement and mix in asphalt emulsion stabilizing agent. (Wirtgen photo)

While it can do the same in-place recycling and stabilization that the WR 240i can do, the 3800 CR platform is unique because it can be quickly converted from recycle mode to milling mode and also serve as a cold mill.

This takes APS about an hour. No truck crane is required; a skid steer loader will suffice for raising the machine.

"The beauty of the 3800 CR is that they are bidirectional," Donald said. "Today we can be recycling, and tomorrow turn it around cold-mill tomorrow. No muss, no fuss.

"And this machine has a foamed asphalt additive package on it, as well as the emulsion package we are using. We can use it for foam or emulsion and reclaiming, as well as milling."

The Hamm HD+ 120 VV HF was compacting in both static and vibratory modes, but the GRW 280i pneumatic roller plays a special role.

"The rubber-tired roller serves two functions for us," Donald said. "It gives us very good compaction, as steel-drum rollers can bridge the aggregate.

Being a nine-tire machine, you don't get any bridging, and it helps us achieve 98 percent compaction.

"It also seals the surface of the material," Donald added. "It kneads the material and gives us a nice sealed surface on which to put our prime coat."

Wirtgen is APS's go-to platform for innovative, productive construction equipment. Donald advised that between Florida SR 37 and a project on Lake Markham Road, more than $6 million of Wirtgen equipment was being utilized. 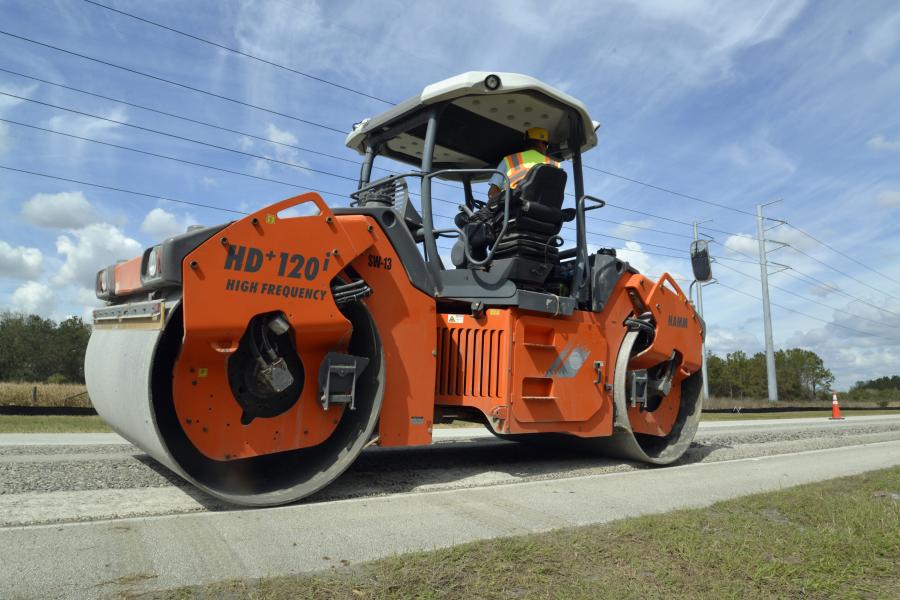 "We looked at all the manufacturers that are out there, and we feel that Wirtgen is superior in terms of technology and reliability," Donald said. "The WR 240i is state-of-the-art. Their additive packages are tremendously accurate. We bring a 5,500-gallon tanker in here, and when that flow meter says you're down to 500 gal. after injecting 5,000 gallons, we crawl up and look inside the tanker and find there are 500 gallons remaining.

"Their power ratio-to-pulverization capabilities are outstanding, with plenty of muscle in the WR 240i, and also with the larger WR 250i machines we are running in New Jersey," he added. "The comfort of the operator and his ability to see 360 degrees from his cab, the video cameras, and joystick operation all work for us. They're head and shoulders above the competition."

This article was contributed by Wirtgen America Inc.