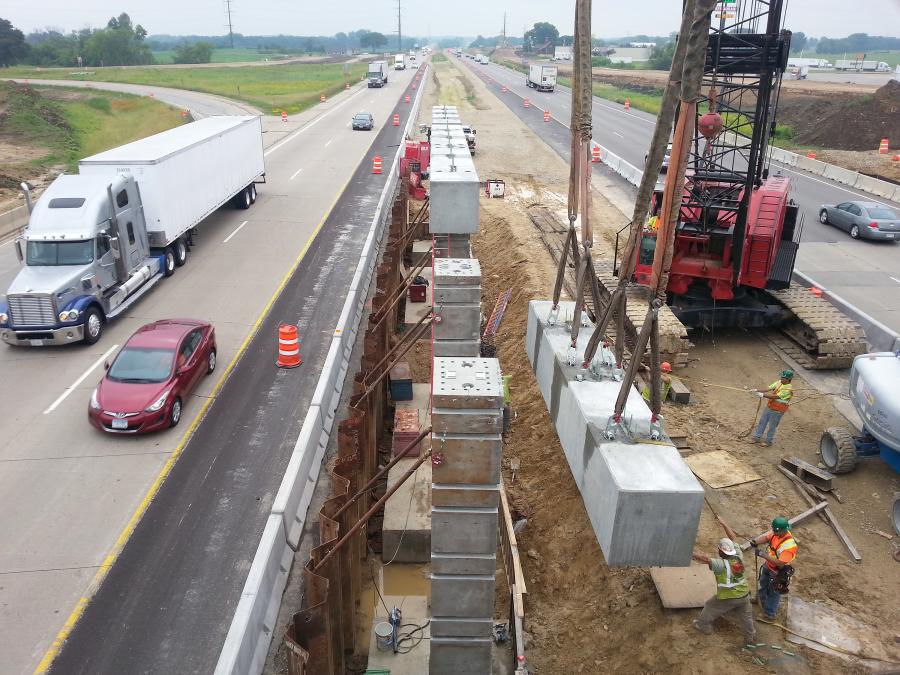 The Wisconsin Department of Transportation’s (WisDOT’s) $1.2 billion reconstruction and expansion of Interstate 39/90 in south-central Wisconsin is well under way.

The Wisconsin Department of Transportation's (WisDOT's) $1.2 billion reconstruction and expansion of Interstate 39/90 in south-central Wisconsin is well under way. Initial construction began in 2013 with the replacement of the I-39/90 and WIS 11 (Racine Street) interchange in Janesville. Since then, many of the Interstate's bridges and interchanges have been reconstructed and widened to make room for Interstate expansion.

“There's still plenty of bridge work to be completed throughout the corridor,” said Steven Theisen, I-39/90 project communications manager. “However, what's been completed to date allows us to move forward on the actual expansion of I-39/90, between Beloit and Madison.”

The work, funded mainly by federal and state dollars, extends 45 mi. (72.4 km) from the Illinois state line to the U.S. 12/18 interchange near Madison. Originally built in the early 1960s, the Interstate is being expanded from two lanes in each direction to three lanes along much of the route. A portion of the Interstate through the Janesville area will be expanded to four lanes in each direction to meet traffic needs in that area.

“All 11 interchanges along the corridor have outdated design features that contribute to safety concerns,” Theisen said. “Without improvements, all sections of I-39/90 are expected to operate at unacceptable levels of service, meaning unstable traffic flow and stop-and-go conditions, creating significant travel delays and increased safety issues.”

The number of traffic-related crashes along I-39/90, between the Illinois state line and Madison, continue to increase as travel volume grows. In 2011, the Interstate carried an average of more than 50,000 vehicles per-day, with traffic volumes exceeding 70,000 vehicles a day during the summer's tourism months.

Traffic modeling predicts these volumes to increase to upwards of 80,000 vehicles per-day by 2040. Of these amounts, truck traffic accounts for about 30 percent of vehicles on this stretch of Interstate, which places even greater strain on traffic and road infrastructure.

These volumes have caused significant congestion and safety concerns. There was an average of 1,876 crashes along this stretch of Interstate for the four-year period of 2012 to 2015. Of these, 591 resulted in injuries and 11 in fatalities.

“Without improvements, these crash trends and delays, due to congestion, will continue to get worse,” said Theisen.

I-39/90 is one of the most important transportation corridors in Wisconsin. There are more than 10,900 businesses, employing more than 260,000 people, located in communities along the corridor. It's also a major travel route for tourism as visitors enter Wisconsin to enjoy the great destinations across the state.

“In 2012, Dane and Rock counties had an estimated $1.2 billion impact in terms of visitor expenditures from food, lodging, retail sales and tourist-related attractions in the communities along the Interstate,” said Theisen.

This project is one of the largest highway projects undertaken in south-central Wisconsin. Due to its size, the overall corridor was divided into three segments — North, Central and South.

Expanding the roadway allows more motorists to conveniently travel the area, increase economic activity in the entire region and provides new opportunities for growth in tourism and business development.

Due to its importance, significant study, planning and design was completed prior to start of construction. This included studying traffic volumes and identifying traffic patterns, both on and near the Interstate. The findings allowed the project team to design interchanges that accommodated traffic patterns for each interchange. This led to incorporating roundabouts at some of the interchanges and also to the construction of the state's first Diverging Diamond Interchange (DDI).

“DDIs move traffic to the opposite side of the road within the interchange which allows for free flowing left turns onto the Interstate,” said Theisen.

Two other locations along I-39/90 will be reconstructed utilizing the DDI design to accommodate interchange locations with predominantly left hand turns onto the Interstate.

“Since being completed late last fall, the DDI has proven very effective,” said Theisen, who noted that DDIs also are being considered elsewhere across Wisconsin.

The magnitude of reconstructing the Interstate created challenges such as upgrading alternate routes on nearby highways, efficiently managing traffic during construction and utilizing materials that would extend the life of the new roadway and bridge structures.

Although recycled roof shingles have been incorporated in hot mix asphalt since 2010, the WIS 73 alternate route reconstruction project, between Edgerton and Deerfield, was one of three state approved pilot programs to use an even larger percentage of shingles as the binder.

“Previously, only 25 percent of the binder (or asphalt cement) was allowed to be replaced with recycled roof shingle binder,” Theisen explains. “The pilot program allowed for up to 50 percent of the binder to be made from recycled shingles. This helps reduce material costs and reduces the amount of shingles being placed in landfills.”

To crossover the Interstate, a majority of bridge structures along the I-39/90 corridor are single and multiple span prestressed concrete girder bridges with girder depths ranging from 36- to 72-in. (91 to 183 cm). All piers are multiple shafts supported on piling driven to capacity and the abutments are sill-type supported on driven piles.

“At several locations, we have incorporated mechanically stabilized earth (MSE) walls to meet specific design and site constraints,” said Theisen. “Many of the bridge details have been standardized to minimize construction cost and design staff have incorporated minimal aesthetic enhancement details along the mainline structures.”

The anticipated bridge construction timeframe ranges from four to six calendar months, and is predicated by maintenance of traffic requirements.

“Our goal is to have bridge contracts awarded and under contract during April with construction to follow from late April/early May and have substantial completion with the bridge opening to traffic during early November,” said Theisen.

WisDOT's standard design life is 75 years for all types of structures. To meet this design life, the design team has incorporated the use of epoxy coated bar steel reinforcement for all structural elements and the use of High Performance Concrete (HPC) in the bridge deck, parapet and structural approach slabs for all mainline and interchange structures.

A limited amount of stainless steel bar reinforcement is being used based upon a cost/benefit analysis by the department. The combination of epoxy coated bar steel reinforcement and HPC will achieve the desired design life. Stainless steel rebar is being used as the joint between the bridge deck and the structural approach slab since this joint is susceptible to higher levels of corrosion.

“Crews using cast-in-place concrete piling achieved a significant reduction in the amount of piling required which translates into a financial savings for the project,” said Theisen. “Previous piling records from nearby locations are used to confirm the estimated piling type and length. We incorporated the mandatory or optional use of precast pier elements with the goal of reducing construction time and cost while minimizing traffic impacts to the traveling public.”

Five of the overpass structures mandated the use of precast pier elements. The other structures allow for the optional use of precast pier elements. The contractors are allowed to pour the structural approach slab with the bridge deck to reduce the overall construction time for a structure. Where possible, a joint-less bridge design is being used to eliminate the need for expensive and high maintenance bearings and expansion joints.

The magnitude of this project has provided significant job opportunities. Hundreds of people have worked on the project to date and many of the contractors are hiring new staff to meet the project's workload.

Coordination also is a significant factor. Monthly roundtable planning meetings were held early in the preliminary design years to work out any questions or issues from the three consultant design teams. These meetings helped minimize last minute revisions and created a consistency in design for the entire corridor.

Another important element was ensuring the pavements are designed for a 50-year life cycle. In Wisconsin, the initial service life for new concrete pavement is 25 years before a rehabilitation is required. After 25 years, improvements to the pavement are required at regular intervals of eight to 15 years, depending on the scope of rehabilitation.

In addition to the three segments teams that manage their portions of the Interstate, a Corridor Management Team (CMT) was created and organized similar to a WisDOT region office with experts assigned to the various functions needed to move a project forward.

“As challenges arise, the technical expert(s), such as utilities, real estate, survey, geotechnical, design, structures, etc., are called upon to recommend a solution to CMT management,” said Theisen. “One of our project's goals is to have no surprises during construction.”

As the I-39/90 Expansion Project progresses, project staff and the department's financial team continue to review alternatives and new opportunities to minimize the impacts to the public and reduce costs. The overall corridor construction schedule is developed and managed by the CMT. Monthly meetings have been held since 2012 to revise schedules as a result of the corridor funding stream adjustments.

Preliminary construction schedules for each let contract are developed by the segment designers prior to advertising the letting. The schedules are worked up in Oracle P6 software and the critical paths are evaluated. This information is made available to the potential bidders as a head start in determining a more detailed construction schedule.

In addition to daytime work, most construction projects require some nighttime activities. This is necessary due to the high traffic volumes during the daytime hours in this area. Working at night, under lane closures and often behind barrier walls, increases the safety of the motorists and construction crews.

Typically, crews cease operations around mid- to- late November for a winter shutdown and resume in the spring, once weather permits. With certain projects, such as the I-39/90 and Rock River bridges near Edgerton and Newville, work occurred throughout the winter as crews removed the previous northbound bridge deck and piers. In early January 2017, demolition experts used explosives to break up and remove the pier foundations under the water level.

“Significant planning was completed prior to the blast to ensure motorists, work crews, the new bridge and existing I-39/90 southbound bridge were safe from the blast,” said Theisen. “Interstate traffic was slowed to 20 mph by Wisconsin State Patrol troopers far in advance of the bridges near Edgerton and Newville. Within six minutes of the blast being completed and the all clear was given, traffic resumed normal operations.”

The overall I-39/90 Expansion Project is expected to be completed in 2022.