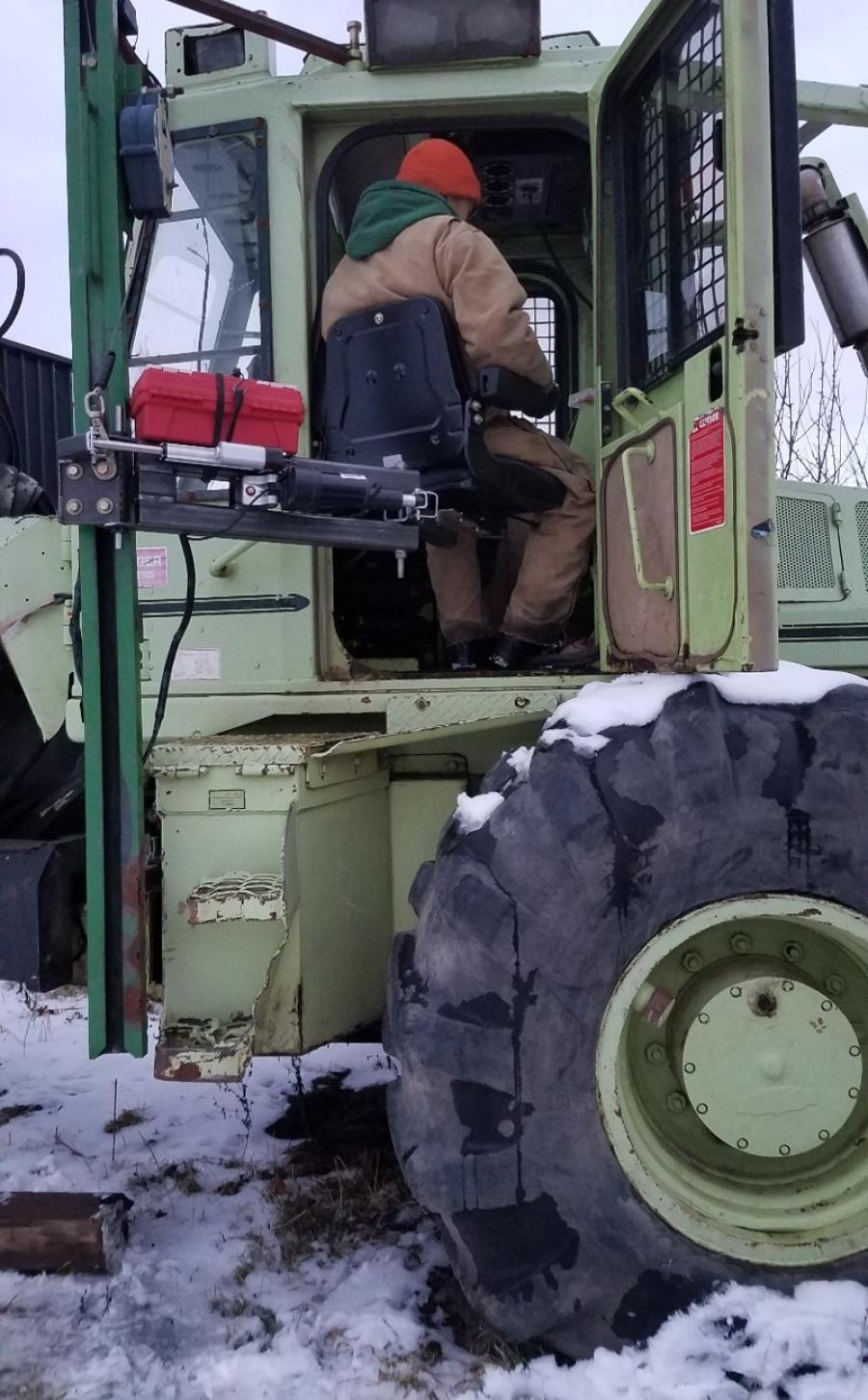 According to a statistic listed on Michigan AgrAbility’s official website, more than 1,900 Michigan agricultural workers need adaptive services (services intended to help people with disabilities successfully do their jobs) every year. In 2016, Duane Berg was among these workers.

For Duane Berg, owner and founder of Berg Logging in Gladstone, Mich., business was booming in 2010 — right up until he fell off a roof.

"I got injured in November 2010. Besides [being] a logger, I was a construction worker, and I was helping one of my friends do a job," Berg said.

Berg's T10 vertebra was severely injured in the fall, leaving him paralyzed from his waist down. This created a vicious circle: he was forced to run his business remotely, which led to production difficulties. In turn, that resulted in lower profits, making it even harder to successfully harvest timber. Eventually, Berg was forced to sell off all but one piece of his company's logging equipment.

But his story in the logging industry didn't end there. Berg is one of many loggers and farmers in Michigan who have received assistance from an organization called Michigan AgrAbility. The program's goal: helping people in the farming and logging industries overcome injuries, illness and old age to continue providing for their families.

"AgrAbility is a USDA [United States Department of Agriculture]-funded program to help farmers and loggers with any kind of severe medical impairment … figure out how to keep doing their work," Michigan AgrAbility Assistive Technology Professional Ned Stoller said.

Michigan AgrAbility was founded in 1991, making it one of the initiative's first state programs. Twenty of these programs exist today; the national program is based out of Purdue University in West Lafayette, Ind.

"Each state's AgrAbility is managed by the agriculture or land grant university in that state. They partner with a nonprofit disability services organization — in Michigan, it's a partnership between Michigan State University and Easterseals Michigan," Stoller said.

Easterseals is responsible for raising donations from private donors, while the program's USDA funding goes through Michigan State University in East Lansing, Mich.

Stoller, who is a Purdue graduate, has been involved with AgrAbility since 1998.

"I was studying agricultural engineering, and I wanted to do something to help people," he said.

Though he wasn't sure exactly what he wanted to do at first, he heard about a new program his university was running one day and decided to get involved. He transferred to Michigan AgrAbility three years into his career, but he has been a part of AgrAbility ever since then.

"The Lord gave me this job, and it's been good," Stoller said.

In his role as an assistive technology professional for Michigan AgrAbility, Stoller travels to farms and logging sites across the state to learn more about workers' disabilities. Armed with this information, he then works to figure out the best way to help his clients get back to work — whether that involves buying new accessibility products or modifying existing equipment.

"If there's already a product off the shelf, it's more efficient if you can buy something that's already invented. But then you need the funding to buy that," he said, noting Michigan Rehabilitation Services — another partner of Michigan AgrAbility — is often willing to pay for equipment modifications.

According to a statistic listed on Michigan AgrAbility's official website, more than 1,900 Michigan agricultural workers need adaptive services (services intended to help people with disabilities successfully do their jobs) every year. In 2016, Berg was among these workers.

While recovering from his injury, Berg attempted to continue running his namesake company. To visit job sites, he used a track chair — an off-road wheelchair capable of dealing with terrain a normal wheelchair would not be able to handle. The chair, which was not covered by Berg's insurance, cost $17,000.

This allowed Berg to get out in the woods during the summer and fall months, but it wasn't a solution to all of his problems. With his mobility still limited, he was unable to operate heavy equipment like he used to. Making matters worse, even the track chair could not withstand the Upper Peninsula's harsh winter weather.

"In the winter, I was working up in Ironwood, [Mich.] at the time. And up there, they get so much snow that I could not get back in the woods and see what was going on," Berg said.

Instead, Berg's team had to send photos for him to review. Without his physical presence on job sites, production quality began to slip, and expenses started going up.

"By the time I could sell stuff, it cost them more money to actually produce it," Berg said.

Before November 2010, Berg Logging and Berg's construction company had up to 40 employees. This number dwindled over time, to the point where only Berg was left — and both of his companies were essentially out of business.

During that time, Berg focused on maintaining his Gladstone property.

"I did plenty of other things — I did welding and repairs that needed to be done around here, and I fed the cattle. But I couldn't get into logging anymore," he said.

In the summer of 2016, Berg met Stoller at the Upper Peninsula State Fair, held in the city of Escanaba, Mich. There, he had a chance to learn about AgrAbility and how it can help agricultural workers living with disabilities.

"I saw Ned down at the fair, and I started talking to him, and he said his company helps people like me get back into it," Berg said.

Stoller began working with Berg shortly after that meeting. One way he was able to assist Berg was by installing a drive-through gate on his property.

"That's so you can drive through the gate without getting off the piece of equipment that you're driving," Berg said.

Michigan AgrAbility also helped Berg with modifications to his forwarder.

"We did a lift to raise him up from his wheelchair to the seat, and then we put electric controls on the throttle," Stoller said.

According to Stoller, the lift itself was donated by another farmer in the area.

"It was something that wasn't needed anymore, so Duane and people around here in the Gladstone area worked together and got it attached to his log forwarder," he said.

Though Stoller has been working with Berg since 2016, he said Michigan AgrAbility is still actively supporting Berg.

"When AgrAbility gets involved with somebody, we get involved and stay in touch … we try to keep helping with adaptations. It's not just a one-time interaction, usually," he said.

In the fall of 2020, Michigan AgrAbility worked with students at Michigan State University to further improve the lift on Berg's forwarder.

"They designed a better seat for the lift, so that Duane can get up easier. It's more comfortable and more safe for him," Stoller said.

Like all other improvements made through Michigan AgrAbility, Berg did not have to pay for this seat. The organization never charges farmers or loggers for its work.

"AgrAbility does all of the consultation and research for free for the farmer or the logging outfit, because we're funded by the USDA," Stoller said.

Meanwhile, new equipment and/or modifications to existing equipment are normally paid for through Easterseals Michigan, Michigan Rehabilitation Services and other AgrAbility partners. Today, Berg Logging — once on the verge of shuttering permanently — is back in business. Though he is still the company's sole permanent employee, Berg has worked with subcontractors as needed.

This setup has allowed Berg to take on several jobs as of late.

"I was able to do one at home here, and a couple of other ones throughout [Delta] County ... for some other farmers and stuff," Berg said, noting he has been busy with work on the Stonington Peninsula recently.

Berg attributed his change in fortune to Michigan AgrAbility.

"It's helped me from being out of business to be able to stay in business," he said. He encouraged any Michigan residents in a situation similar to his own to contact Michigan AgrAbility ASAP.

"Get a hold of Ned if you want to get back out … he probably can work some way out that you can get back out and do what you need to do," Berg said.

AgrAbility is not limited to helping loggers and farmers living with physical injuries. The program also supports people dealing with conditions such as loss of hearing and/or vision, post-traumatic stress disorder and back pain.

Stoller said he enjoys helping Berg and others like him in his work with Michigan AgrAbility.

"Having a disability is tough, and it takes a lot of fortitude and courage. You've heard how Duane's business went from a lot of machines and a lot of employees down to himself, but AgrAbility's going to meet somebody where they're at and just try to help them take the next move forward — to figure out how to do the next best thing," he said.

To learn more about Michigan AgrAbility, to share an idea that could help Michigan agricultural workers or to donate money or equipment, call 800/956-4106 or visit www.michiganagrability.org. The organization also can be found by searching for "Michigan AgrAbility" on Facebook.