Work Advances on $1.6B Auto Factory in Huntsville 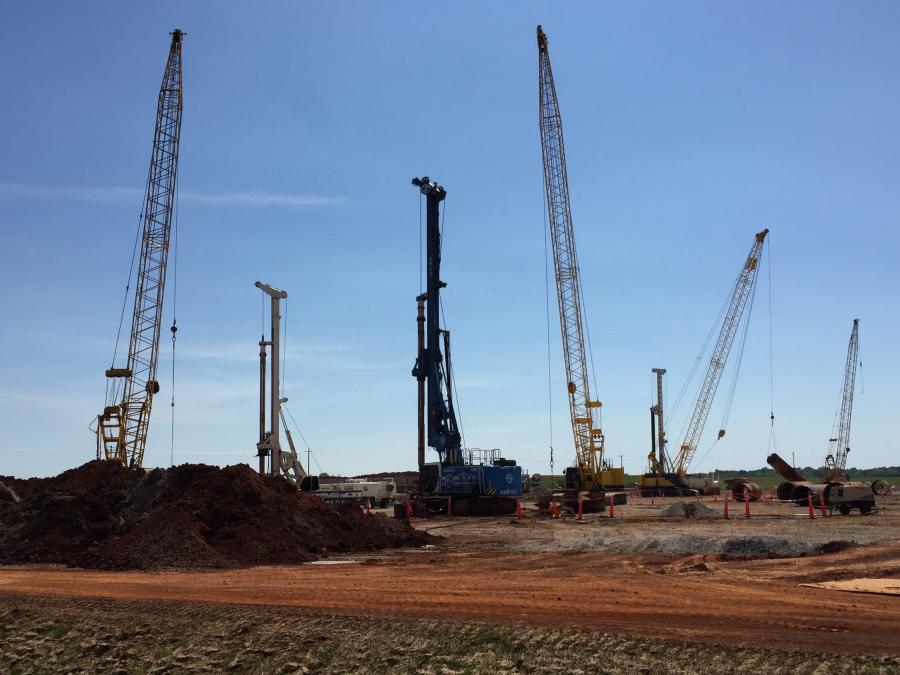 Construction on the $1.6 billion Mazda Toyota plant in Huntsville, Ala., commenced in June 2018 and is scheduled for completion in the summer of 2020.

In a construction milestone, crews have installed the first beam of the new, $1.6 billion Mazda Toyota plant in Huntsville, Ala. The erection of the manufacturing facility is well under way, with 2,500 workers projected to be on site by late summer.

"Mazda Toyota Manufacturing U.S.A. [MTMUS] will assure competitiveness in manufacturing, allowing us to respond quickly to market changes and help ensure sustainable growth for both automakers as we continue our efforts in the future of mobility," said Mark Brazeal, MTMUS vice president of administration. 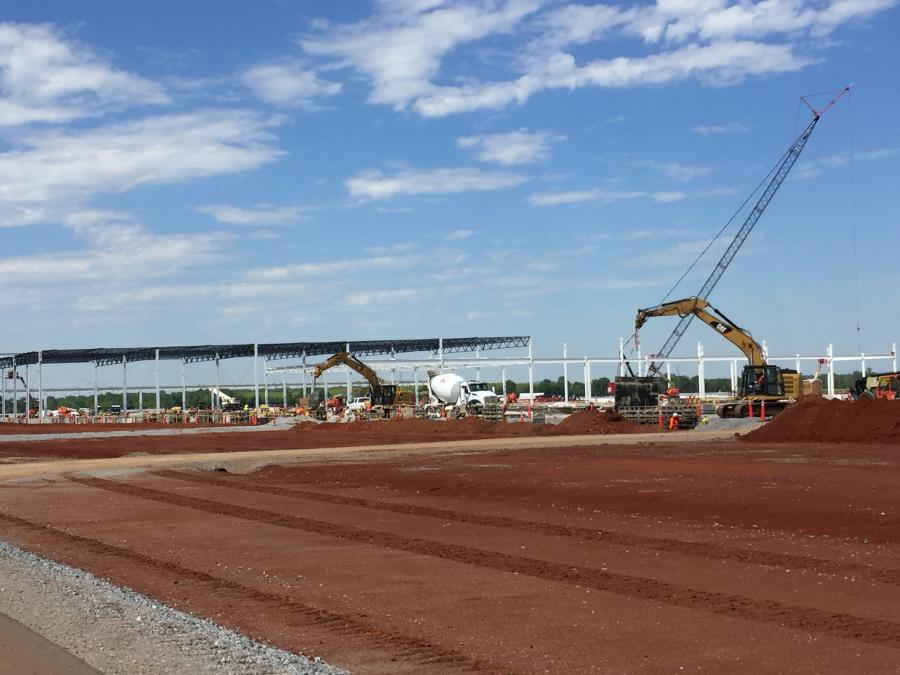 The job site was previously used for farming and was mostly clear. Site preparation involved some leveling and the installation of stormwater controls.

"By combining the best of our technologies and corporate cultures, Mazda and Toyota will not only produce high-quality products, but also create a world-class manufacturing plant that our team members will be proud to work at. We want to become a vibrant part of the community, and hope the cars assembled at the plant will enrich the lives of their owners."

In mid-April, a small group of team members gathered on site to celebrate the first steel column going into place, signing it as a symbolic gesture.

"The first steel ceremony is one of several milestones as we ramp up construction and begin vehicle assembly in 2021," said Brazeal. "We wanted to share this unique experience with our team members to build greater comradery as our challenges continue. Building a greenfield manufacturing plant is a once-in-a-lifetime experience for many of our team members, and it was a very significant moment."

Brazeal noted that many factors go into selecting a greenfield plant site. 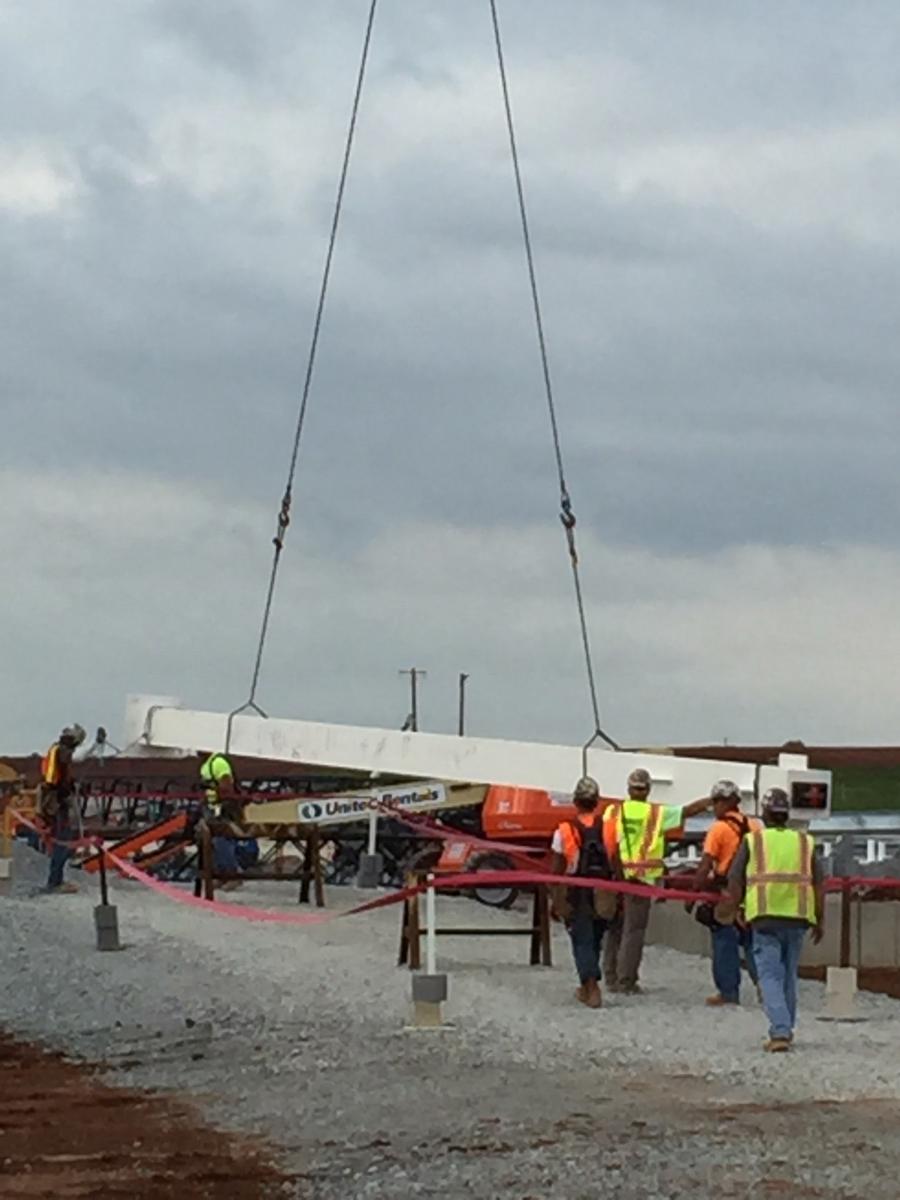 In a construction milestone, the first steel beam is put in place. A group of team members signed it as a symbolic gesture.

"Alabama was ultimately chosen because of its highly qualified workforce, infrastructure, quality of life in Huntsville/North Alabama and the longstanding partnerships created as a result of Toyota's engine plant," he said. "Alabama has invested heavily in the kind of workforce and training program needs that manufacturers require. The great collaborative efforts between local and state agencies also gave Alabama a competitive edge."

Brazeal noted that the ultimate purpose of MTMUS is to build a company in which the best manufacturing practices, innovation and sustainability of both organizations are shared.

The agreement between both companies was announced in August 2017. Specifically, they agreed to establish a joint venture that produces vehicles in the United States, as well as develop technologies for electric vehicles and connected-car technology. They will also collaborate on advanced safety technologies and expand complementary products.

Brazeal said it's extremely satisfying to play a key role in bringing new jobs to the area.

"With a $1.6 billion investment, MTMUS will create up to 4,000 direct jobs, plus employment opportunities at our supplier and business partners," he said. "The labor market in the Huntsville/North Alabama region is very competitive, and as a result, the joint venture's HR team is developing comprehensive strategies for the recruitment and training for these new team members.

"We want to think innovatively and do our best to become a company in which our team members and the entire community are proud. We are confident in the region's and state's workforce abilities for several reasons, including Alabama's heavy investment in the kind of workforce and training programs that all manufacturers require." 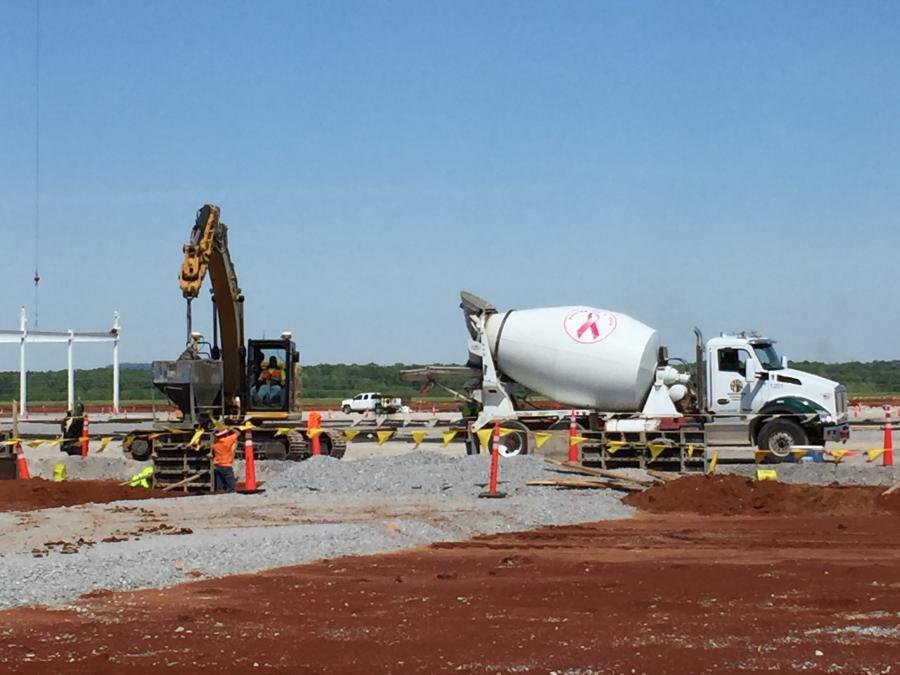 A total of 3 million cu. yds. of dirt has been graded for site preparation, and 150,000 cu. yds. of gravel has been poured to create the plant foundation.

Toyota has been operating an engine plant in Huntsville for 17 years.

"The plant has expanded five times, and currently employs more than 1,400, demonstrating its continued confidence in the local workforce," said Brazeal. "Also, Huntsville/North Alabama has a pro-business environment and a highly qualified workforce to draw from."

Although a heavy rain season has presented challenges, construction of the advanced manufacturing facility remains on schedule. A total of 3 million cu. yds. of dirt has been graded for site preparation, enough to fill the Empire State Building twice. In addition, 150,000 cu. yds. of gravel has been poured to create the plant foundation, equal to filling almost four dozen Olympic-size swimming pools.

Construction commenced in June 2018 and will end in the summer of 2020. Equipment installation will begin soon thereafter. Currently, site utility infrastructure is underway. Primary shops are nearing completion of foundation work and steel erection has begun. Approximately 18,000 tons of steel will be used on the plant.

"Seeing the first steel going into place was a significant milestone for our team and partners," said Brazeal. "It represents the rising of not only our project, but one that will create a community where we'll become a good corporate neighbor, and one everyone will be proud of."

Site clearing has been completed, along with stormwater control, some interior roads, most foundations and temporary facilities for construction management. As work moves forward into the summer months, Brazeal said crews must also be mindful of the elements.

"Weather and environmental conditions are always a concern when considering the health and safety of construction workers and our team," he said. "As the seasons change, the changing risks are considered and mitigated." 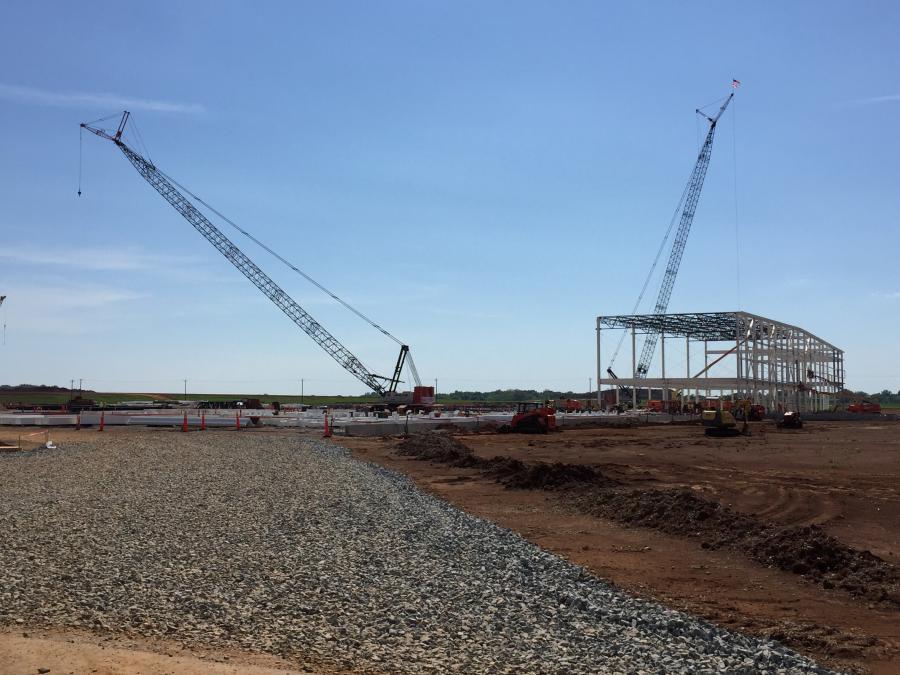 Construction of the buildings must be coordinated with the installation of the equipment and processes intended to go inside of them.

The job site was previously used for farming and was mostly clear. Site preparation involved some leveling and the installation of stormwater controls. Clearing of trees wasn't required, but some small buildings had to be removed.

"The site was mostly clear and reasonably level from the beginning," said Brazeal. "However, the amount of land being prepared required a lot of equipment to complete the work on schedule, and a few bulldozers and dump trucks would not have been up to the challenge. Instead, large tractors with dual scraper pans and off-road dump trucks had to be brought in to level and prepare the site.

"The real project challenge with respect to the land lies beneath the surface. Building safe structures on this scale required several deep foundations that must interact with geology below the surface."

A total of 6 million cu. yds. of dirt and other material will be moved on the project. Machinery required includes heavy earthmoving equipment and cranes. Materials being used include concrete, steel, electric cabling and utility piping.

According to Brazeal, meeting the aggressive schedule between project kickoff and start of production in 2021 is the team's biggest challenge.

"Addressing this challenge requires a departure from traditional construction sequencing and adaptation to ‘fast track' methodology, where construction starts while design is ongoing," he said. "In this scenario, design must progress at a rate that facilitates construction, and change management becomes important because all scope is not entirely known when work begins." 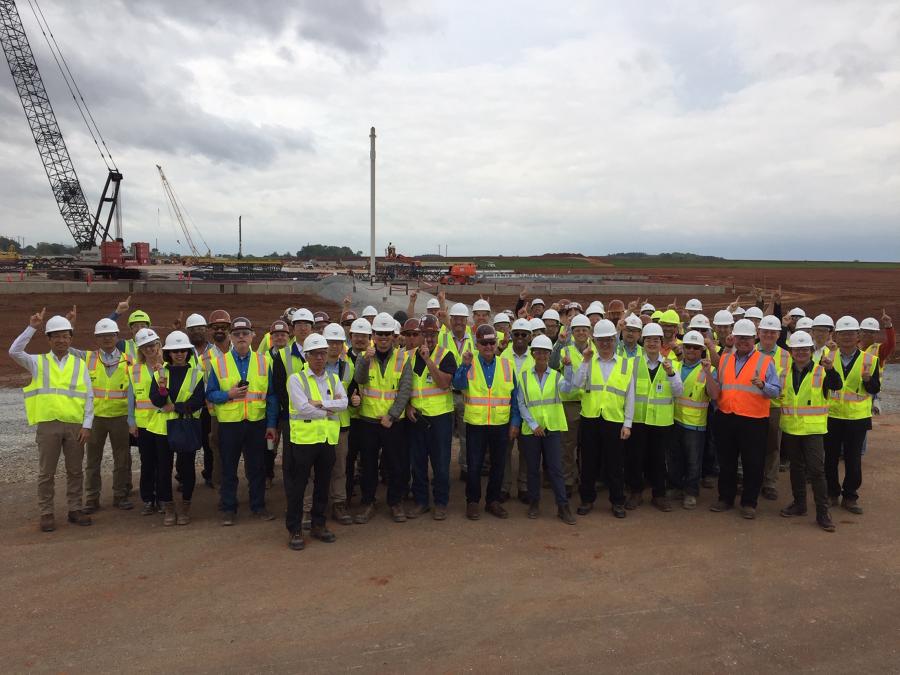 Company officials and construction crew members celebrate the installation of the first beam.

Coordination between process design and building design is important and time-intensive, as construction of the buildings must be coordinated with the delivery of the equipment and processes intended to go inside of them. In addition, building an auto plant differs from other construction projects because while materials for the shells of most industrial facilities are very similar, the layout of an auto plant is fit for only one purpose, Brazeal said.

"Also, the size of the buildings required for auto manufacturing sets them apart from most construction," he added. "Very few industries require millions of square feet for production space."

Mazda Toyota Manufacturing U.S.A. is a jointly owned and operated automotive production plant. The facility will have the capacity to assemble up to 300,000 vehicles a year.

"While this project is a massive undertaking that requires many resources and has its sets of challenges," Brazeal said, "we are confident that our team members, the community and the entire state of Alabama will be able to say ‘built in Alabama' with pride."  CEG