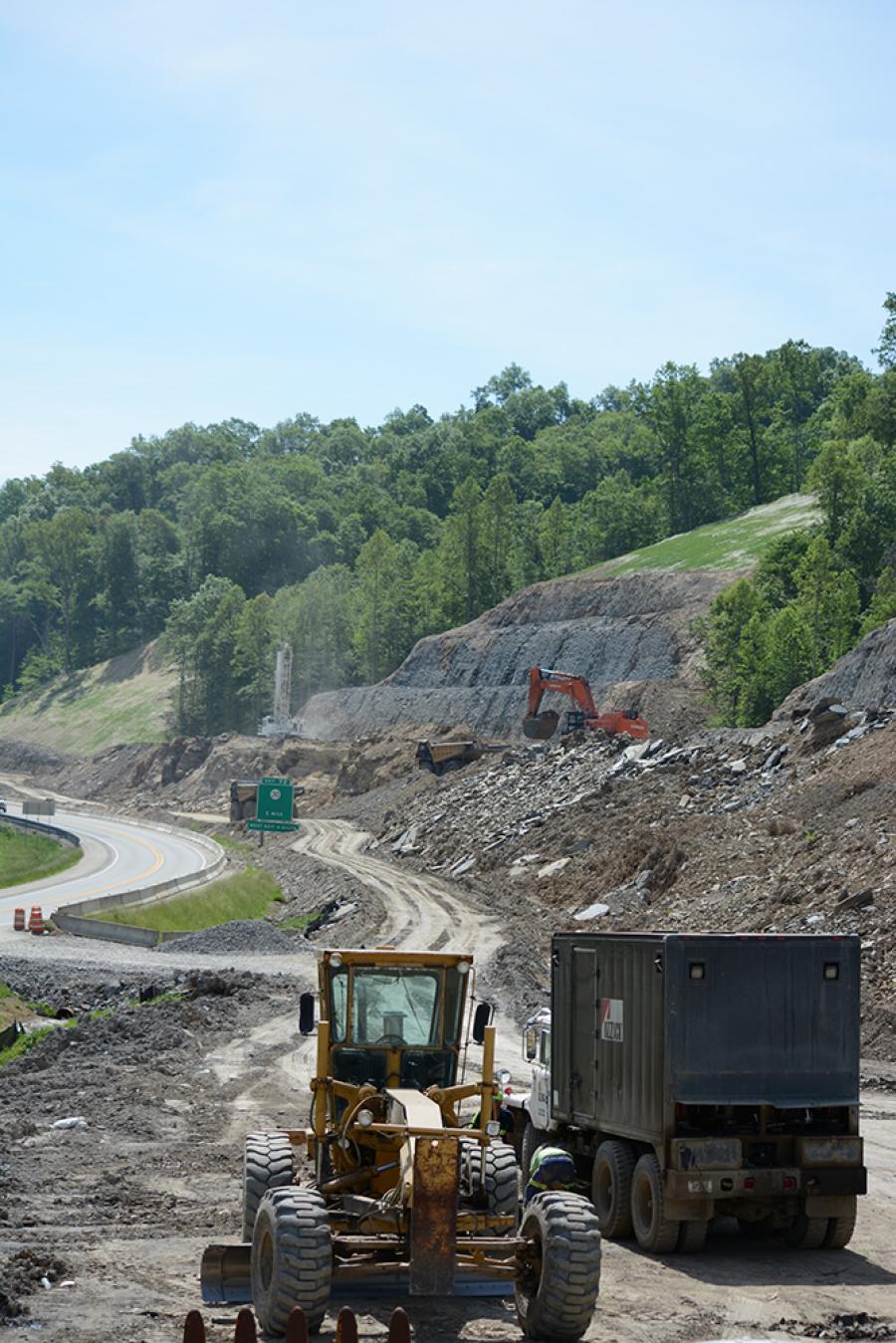 The Kentucky Transportation Cabinet's (KYTC) multi-year Mountain Parkway Expansion is in full swing. The project started in early 2015 and four construction contracts have been awarded. Roadway improvements totaling 8.5 mi. (13.6 km) are under way and more projects are nearing letting. The $750 million-plus project is expected to be completed in six to 10 years, depending on the availability of state and federal funding for the 46-mi. (74 km) road project.

The Mountain Parkway expansion is widening a primarily two-lane highway to four lanes and extending the Mountain Parkway to Prestonsburg. When the expansion is completed, the Mountain Parkway will run more than 90 mi. (144 km) between Interstate 64 and U.S. 23 in eastern Kentucky and complete a 400-mi. (643 km), high-speed route across the length of the state from Paducah to Pikeville. Thirty mi. (48 km) of existing parkway from Campton to Salyersville are being widened, and the parkway will be extended about 16 mi. (25 km) between Salyersville and Prestonsburg.

The Kentucky General Assembly approved, via a mix of conventional state and federal highway funds, more than half of the initial funding for the project. An additional $24 million in federal funding was awarded through a competitive TIGER grant, and $60 million plus in cost-savings design changes have been identified by KYTC and the project team.

By early next year, project officials expect nearly 16 mi. (25 km) of the corridor to be completed or in the construction phase.

“Since the beginning of this project, we have been on an aggressive schedule to expand this important corridor connecting eastern Kentucky with the rest of the state,” said Marshall Carrier, KYTC's project manager of the Mountain Parkway Expansion. “We've focused on moving forward in the areas where we could move quickly to construction while continuing to work behind the scenes planning and designing the other phases of the project. Soon, we'll have about one-third of the project in some phase of construction.”

The goals of the Mountain Parkway Expansion project include improving highway safety along a vital corridor; closing the transportation gap that has limited access to eastern Kentucky; and supporting tourism, businesses and economic development efforts in eastern Kentucky.

KYTC currently is studying two alternatives to extend the parkway, by widening the current corridor along a populated section of KY 114 or building a four-lane expressway in an area to the north of KY 114.

The expansion project was designed with the help of a team of engineering consultants. The corridor currently carries thousands of cars and trucks daily and when completed, will significantly increase vehicle capacity and safety.

With the improvements, traffic volumes on the parkway are estimated to nearly double by 2030.

Carrier stressed that one of the primary design challenges of expanding the parkway along the mountainous corridor was finding the right path. The current parkway, in many places, is lined by steep rock formations on one side and streams and tree lines on the other. Engineering teams studied the corridor closely to select a path that limited impacts on streams, forests and residents.

Construction has gone smoothly, with no significant challenges during the early phases and has moved forward on schedule.

The project corridor is divided into six segments, based on the location of the work and estimated timing of construction.

“The project was originally broken up into 13 sub-projects two years ago,” said Carrier. “We've been blessed with good weather in the past few years, and our contractors have moved forward on the original six miles very efficiently, being able to work almost year-round. The earth work did not require any night work, but that will change with the work in the Restaurant Row Segment, where a number of criteria were set forward for the contractor to reduce impacts on the community.”

Carrier stressed the importance of regular meetings with the contractors and government organizations.

“It keeps both parties in the know from a public communications effort to understanding the overall schedule, completion dates, and funding,” he said. “The Restaurant Row section was expedited by three years because we were able to work with our friends at the Federal Highway Administration and U.S. DOT to secure the $24 million TIGER grant. This was the largest rural grant in the TIGER 6 round of grants. It binds us to additional federal oversight and a time schedule that we have to be cognizant of.”

The Restaurant Row work follows work that started last year in the adjacent Magoffin County Central segment, where significant widening and construction of the roadway and structures have been completed. The segment runs from just west of the Middle Fork of the Licking River to just east of the KY 7/Salyersville interchange. It covers 5.7 mi (9.1 km), from mile markers 69.6 to 75.3. The work is being led by Hinkle Construction Services LLC.

The segment, 2.4 mi. (3.8 km) of existing roadway, runs from just east of the end of the current Mountain Parkway through the Restaurant Row district in Salyersville to just east of KY 114 junction. It will extend the parkway and widen the road to four lanes, limit entry points to ensure safety and mobility and add access roads to support the commercial and retail corridor. The TIGER grant provided funding that accelerated the project, and the $32.5 million construction contract was awarded last June.

In an effort to improve coordination, more structures along Restaurant Row are being razed and underground utilities are being relocated as part of the roadway contract. The entire Restaurant Row project is expected to take three years to complete.

The Restaurant Row project is starting with significant underground utility work along the length of the corridor, which will continue through the rest of the year and into 2017. Roadwork also will begin soon on the west side of the project, where crews will replace a bridge over Burning Fork.

“It is unlike any other part of the project,” said Carrier. “It serves dozens of Magoffin County businesses and is a vital connector that links the parkway to Johnson, Floyd, Pike and several other counties in Eastern Kentucky.”

The first four-lane section of the expanded parkway will soon open near the Gifford Road interchange.

“This will be eye-opening for travelers,” Carrier said. “When the four-lane section opens, it will be a preview of things to come along the entire corridor.”

For the Gifford Road interchange, both eastbound and westbound lanes have been completed, and two new bridges and an overpass are finished. Crews soon will open the entire stretch from mile points 69 to 72 to four-lane traffic.

For the KY 30 interchange, the clearing and site work around the current KY 30 interchange was completed so that an improved interchange and the realigning and widening of nearly 2.5 mi. of roadway could begin. An 840-ft. (236 m) culvert was constructed in early February, and crews constructed a new bridge over KY 30, near mile point 72. Vehicles recently were switched to new lanes that eliminated a sharp curve from the parkway and connect with a modernized interchange.

For the KY7/Salyersville Road interchange, crews continue to drive piling and pour concrete for a new bridge over a creek. Occasional blasting is still occurring, and excavation to remove about 5 million cu. yds. (3.8 million cu m) of dirt is expected continue until spring 2017.

Construction projects in the Morgan County segment are scheduled to be let in December.

Three other segments of the project still are in the planning and design phases, including: The Wolfe County segment, the Magoffin County West segment and the KY 114 segment.

Materials removed are being recycled for fill and sub base on the project.

“KYTC encourages recycling, but there are no contract requirements,” said Ryan Watts, executive director of the KYTC's office of public affairs. “However, KYTC uses the low bid system to choose bidders so when advantageous, it is likely the contractors recycle. An example is the use of recycled asphalt in new asphalt that is installed. The contractor is responsible for disposal of construction materials.”

Construction of the Bert T. Combs Mountain Parkway, which is approximately 75 mi. (120 km), began in 1960 and was completed in 1963. The parkway is a four-lane road for 46 mi. from I-64 at Winchester to Campton. From that point east to Salyersville, it is two lanes with an occasional passing lane. The winding road begins near Winchester and crosses through parts of Clark, Powell, Wolfe, Morgan and Magoffin counties before ending just west of Salyersville. CEG