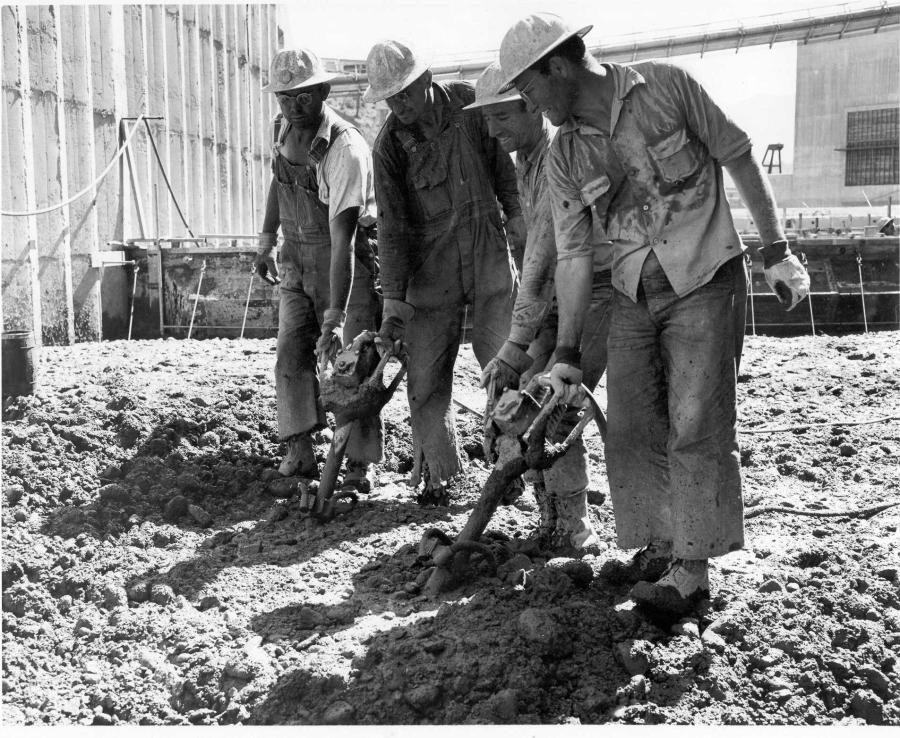 Twenty million dollars of pre-construction work is under way at the Shasta Dam and reservoir in advance of a $1.5 billion project to raise the dam 18.5 ft. Shasta Dam is the largest reservoir in California and second largest in the United States after Grand Cooley.

The need to raise the dam comes down to simple "math," said Sheri Harral, public affairs specialist of the Bureau of Reclamation Mid Pacific region.

"We only have so much water in the earth," Harral said. "We never get any more or any less, but the population is growing. The need for water keeps growing and growing and growing, so there is the need to increase water storage and we are not seeing the water we used to see."

Talks to raise the dam have been ongoing since the 1980s. The feasibility and environmental impact statement were sent to Congress in 2015, with approval for the project and $20 million for the preliminary work coming in March 2018 from the Water Infrastructure for Improvements to the Nation (WIIN) Act.

According to a Reclamation Fact Sheet, enlarging the reservoir will: 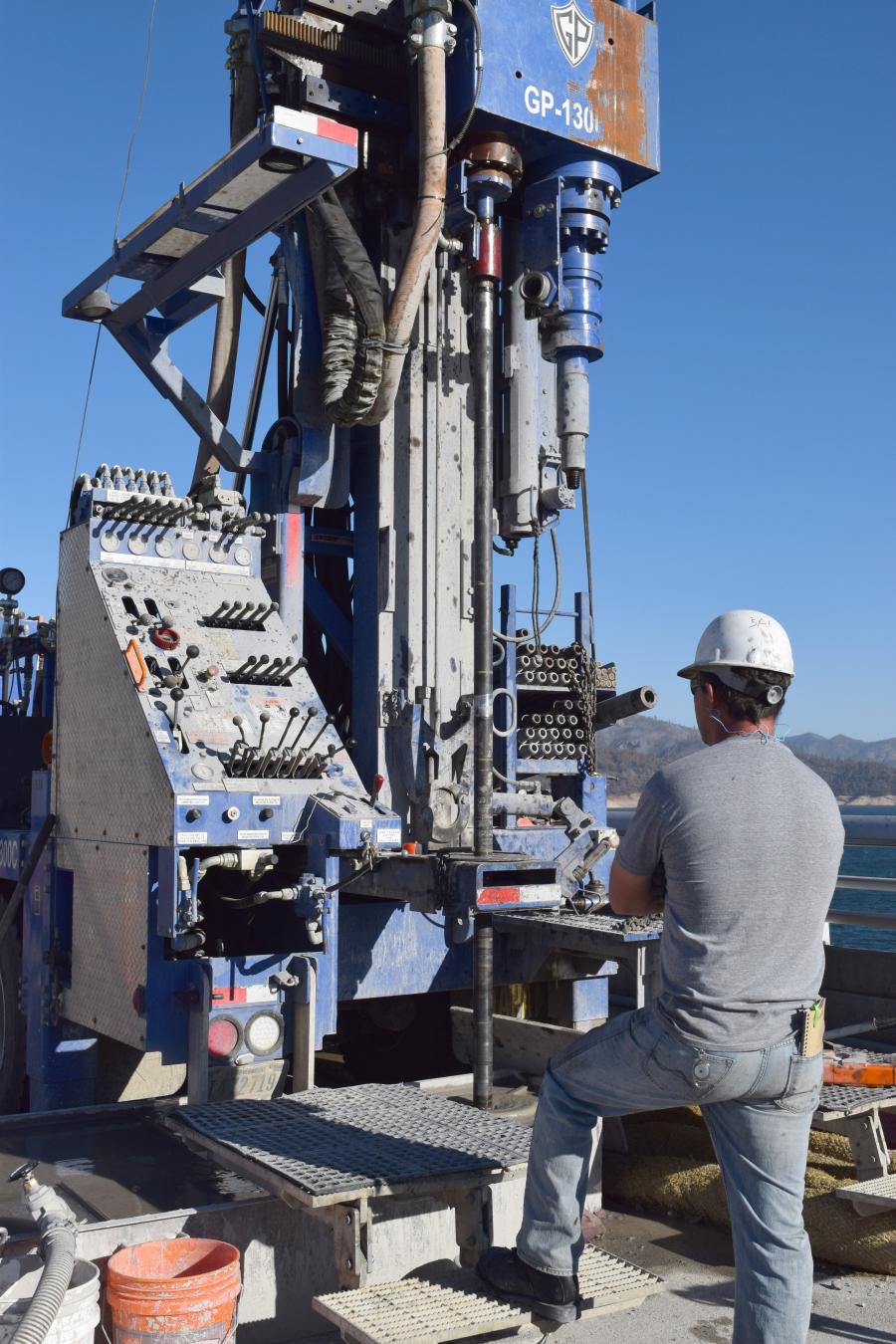 Crews currently are performing exploratory drilling and concrete coring to gather strength data for designers to complete the design, said Don Bader, area manager of Northern California Area Office for Reclamation. The office also is working with stakeholders on the reservoir who will be impacted and conducting environmental assessments.

The project will require moving homes, a railroad and a marina, with the dam scheduled to be finished and storing water by February 2024.

"We will get more funding in 2019," Bader said. "The goal is to get the construction contract awarded by December 2019. In today's world that's very impressive. The big thing about the WIIN Act funding is it will not require congressional authorization, but it does require that 50 percent of the construction costs come from private stakeholders. That will come from the stakeholders who are interested in gaining more water from this raise."

The dam is currently 602-ft. high and 883 ft. thick. The raise will add two stories to the existing structure and increase the water storage from 4.5 million-acre-ft. to just over 5 million acre ft.

"A huge part of this dam raise is modification of the spillway," Bader said. "We're replacing three horizontal drum gates with eight vertical gates. We're reconfiguring the spillway outlets. That's a lot of mechanical work that needs to be done."

During construction, contractors will block a two lane roadway that runs across the top of the dam, rerouting local traffic around the dam.

In addition to the concrete work, the project calls for enlargement of the left abutment which is a dirt embankment. Bader expects to see all the heavy equipment associated with concrete and soil construction, including excavators and mobile cranes, on site. A concrete batch plant will be built nearby. The contractor may also utilize a barge to help facilitate construction, Bader said. 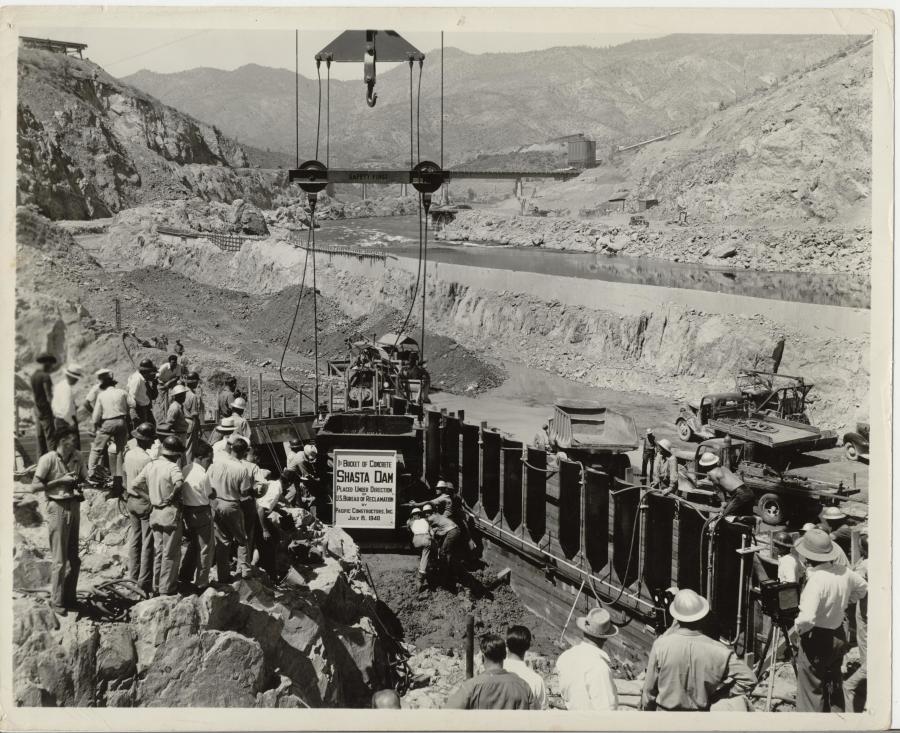 "It took six years, nine months for construction. It was constructed during the recovery of the Great Depression and through WWII. It employed 4,700 people, who worked around the clock, day shift, swing shift and night shift."

Shasta Dam is considered the "keystone" of the Central Valley Project, a 500-mi. area that starts at Shasta and runs all the way to Bakersfield.

"It is one of the largest water storage and transport systems in the entire world," Harral said. "The CVP comprises 20 reservoirs and 500 mi. of canals. It provides water to use for irrigation for more than three million acres of agricultural land and the reservoir stores almost 12-million-acre-ft. of water.

"The whole reason for the CVP is basically the hydraulic conditions of California. They vary greatly from year to year, season to season and place to place. Northern California, where Shasta is located, gets the majority of the state's precipitation and we get it during the winter. But most of the central and southern portions get it in the spring and summer and they get snowmelt. Shasta is probably one of the rarest reservoirs we own because 90 percent of what fills Shasta Lake is the rainfall and 10 percent is snowmelt. All our other dams are snowmelt.

"The CVP is the seventh largest economy in the world because of the agricultural economy. We're bringing more economy in California than entire countries. Just California itself. The premise was to take the rain and flooding and send it to where it is needed. The main thing, the dam was constructed first and foremost for flood control, water storage, and fish and wildlife, which is now at the top. It's also for hydroelectric power, drinking water, municipal and industrial use and navigation of and recreation on the Sacramento River."