After 57 years of service, the bridge is structurally deficient and functionally obsolete. 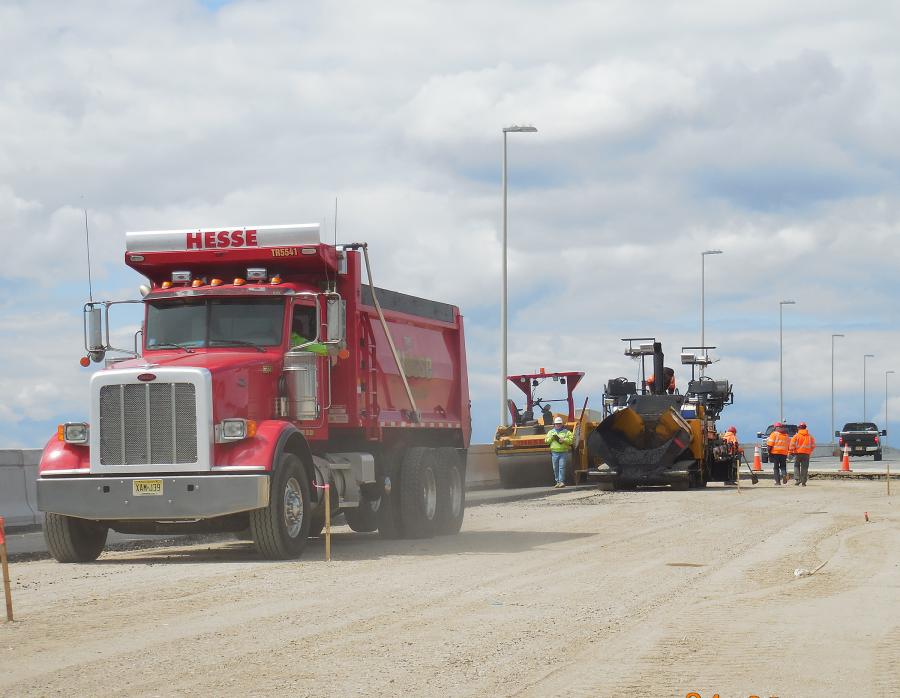 NJDOT photo. This view is of the roadway work at the east approach to the new Route 72 Manahawkin Bay Bridge. Rollers are used to compact the subgrade material, paving machines are used to place asphalt to the proper grade, and final rollers pass over the asphalt again to provide a smooth and unyielding surface.

A $350 million project for the New Jersey Department of Transportation (NJDOT) is expected to continue through 2020. The Route 72/Manahawkin Bay Bridge project began in 2013, and involves the 3-mi. (4.8 km) long causeway that links Stafford on the mainland with Ship Bottom on Long Beach Island. After 57 years of service, it is structurally deficient and functionally obsolete.

Construction of the new span was completed earlier this year, and the existing Bay Bridge, will be closed to traffic for rehabilitation. Upon completion of the rehabilitation work, it will serve as the bridge for westbound traffic.

The project is both federally and state funded.

Steve Schapiro, NJDOT communications director, reported that a new bridge has been constructed parallel to the existing one over Manahawkin Bay, providing the safety of a redundant route on or off the island in the event that one of the bridges needs to be closed.

“This design is consistent with Christie Administration objectives to build in strength or redundancy to better withstand future storms,” he said. “The existing causeway sustained relatively minor damage during Super Storm Sandy, but storm damage is a concern especially because it provides the only way for motor vehicles to enter or exit Long Beach Island.”

The new bridge is 2,400 ft. (731.5 m) long with a vertical clearance of 55 ft. (17 m) over Manahawkin Bay. Ultimately, it will function as the bridge for eastbound traffic once the project is completed. According to Schapiro, this sequence was designed to preserve the current two travel lanes in each direction during busy summer seasons from mid-May to mid-September during daytime hours and weekends. The contractor is allowed single-lane closures overnight and during the off-season, but one lane will always be maintained in each direction.

“Some of the challenges are constructing a massive project over an environmentally sensitive area in a congested tourist destination,” Schapiro said. “The thoroughfares being constructed and repaired are the only means of transport on and off the island. Detours and permanent lane closures are not an option. Due to the heavy volumes of traffic in the summer, the work periods are very restricted. Because crews cannot work in the summer, the construction is performed during the more difficult cold months when work like pouring concrete and paving asphalt are extremely difficult.”

Another challenge is that the bridge must remain open at all times, requiring creative work schedules to ensure traffic can get on and off the island.

“If an issue arises, it could result in access to the island being closed,” Schapiro said. “This fact forced us to take additional measures and preparation to perform the work, and they have all been successful.”

• A 6-ft. (1.8 m) sidewalk on the westbound (north) side of Route 72, with connections to communities and points of interest on the south side of the roadway

• Bicycle accommodations, including wider outside shoulders on the twin Manahawkin Bay Bridges and 6-ft. bike lanes on the trestle bridges

• Intersection improvements in Ship Bottom, designed to improve traffic flow for both north/south traffic on Long Beach Island and along 8th and 9th streets, and drainage improvements to improve access during heavy rainfalls and high tides.

The continuing development of fatigue cracks in the floor beams of the Manahawkin Bay Bridge and progression of severe rusting contributed to the requirement that the superstructure be replaced. The chipping and cracking of the pier caps of the three trestle bridges requires extensive retrofitting for these bridges. It was reportedly more cost effective to perform a major rehabilitation than to continue repairing the bridges as problems developed.

NJDOT also looked for ways to improve public access to the waterfront, including areas for fishing and crabbing. The “String of Pearls” lighting formerly seen on the existing Manahawkin Bay Bridge at night will be replicated on the outside of both the existing and new Manahawkin Bay Bridges using current technology to improve reliability, but these lights will not be visible from the roadway. Highway lighting poles utilizing Light Emitting Diode (LED) technology will be provided to light the roadway.

A total of five contracts are involved. Construction on contracts three and five began in February 2015. Contract three will rehabilitate the trestle bridges over East Thorofare and West Thorofare along the Route 72 Causeway between the mainland and Long Beach Island, along with various associated improvements.

Included in contract five will be the environmental mitigations needed to comply with the environmental permit conditions for the entire project. The project includes wetland creation, mitigation for freshwater wetlands and retrofit of two existing stormwater basins within the Barnegat Bay watershed and public access improvements.

A separate construction contract will address safety and operational issues at the Route 72/Marsha Drive intersection in Stafford Township. This contract also will include operational and drainage improvements in Ship Bottom Borough, on Long Beach Island. Two-way traffic will be restored along Central Avenue and Long Beach Boulevard. Traffic signals along 8th and 9th streets (Route 72) will be improved.