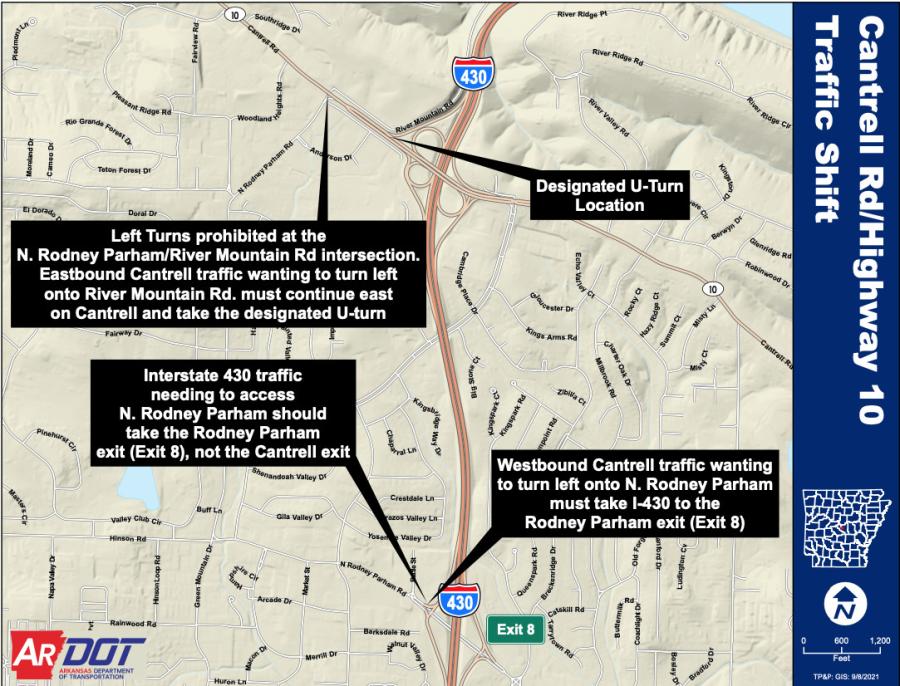 On Oct. 25, after years of public hearings, ideas and input, construction of the Arkansas Department of Transportation (ARDOT) Cantrell Road Widening Project in west Little Rock has finally gotten under way.

ARDOT crews had closed both the eastbound and westbound left turn lanes on Cantrell Road at the Rodney Parham and River Mountain Road intersection in early September, a step the agency deemed as a "significant closure."

Drivers can turn right onto Rodney Parham and River Mountain Road, but left turns are not an option.

Cantrell Road traffic remains free flowing in both directions and does not stop at the Rodney Parham intersection. The lane closures, however, allow crews to begin constructing a bridge with embankments over Rodney Parham, said Dave Parker, an ARDOT spokesperson.

"They're preparing it as far as getting the dirt in, getting the support beams in, getting everything ready, and then we'll build a new bridge there — a new overpass — and that's really the big piece there," Parker told KATV News in Little Rock.

He added that ARDOT also is repaving the road at the same time, mostly at night, trying to keep the existing roads in good shape.

The Arkansas Democrat Gazette reported that the $81 million project to improve the Interstate 430/Cantrell Road interchange is centered on a single-point urban interchange design in which the section of Cantrell Road, widened from four lanes to six, will use a ramp to carry traffic over the North Rodney Parham Road intersection rather than through it, as Cantrell does now.

The elevated roadway is like the nearby ramp that carries traffic on I-630 over South Shackleford Road in the I-430/I-630 interchange.

The "single point" in the interchange design would be underneath Cantrell at North Rodney Parham, the capital city's news source noted in September. One traffic signal would control traffic moving onto or off Cantrell, allowing motorists traveling east and west on Cantrell to avoid stopping at a light to accommodate North Rodney Parham traffic. ARDOT planners identified that light as a source of much of the current congestion in the corridor.

Area motorists need to get used to the changes, Parker warned, as they will in place for the next year.

Cantrell Road and its intersecting avenues make up one of the state's most heavily travelled corridors. Based on the last average daily traffic count for Cantrell, Parker believes it is around 56,000 vehicles per day.

"It's just an enormous amount of traffic," he said. "If you drive through there from three to six o'clock, during the afternoon rush when school is out, it's difficult — very difficult — and something needed to be done."

Parker admitted to KATV that folks who live and work in the area have had to adjust to the changes.

"I appreciate the patience everyone is showing," he said. "I know, it's been difficult at times."

Based on feedback he has gotten on social media, half the people who use the road still seem frustrated by the changes, while the other half like it better.

"No one really likes road construction until it's over," Parker explained. "When the Cantrell widening project is complete, which will be mid-part of 2023, I think every business owner out there is going to be very happy."