Work to Begin On $12M Upgrades to Orangeburg, S.C., Corridor 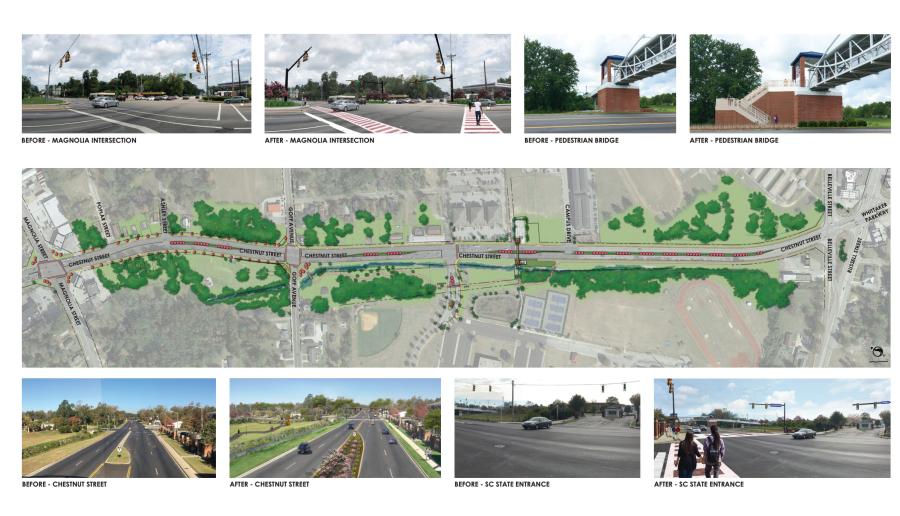 In the shadow of a pedestrian bridge that bears his wife's name, South Carolina Congressman James Clyburn helped break ground May 31 in Orangeburg, S.C., for a new project designed to give pedestrians and bicyclists a safe, beautiful corridor within the city, located southeast of Columbia.

The South Carolina Department of Transportation (SCDOT) developed the U.S. 178/U.S. 21 Corridor Improvements project by coordinating with the Lower Savannah Council of Governments and Orangeburg County to upgrade pedestrian safety along the roadways and improve pedestrian connectivity.

"It's important for me to be here because this project happens to run adjacent to another highway department project named in honor of my late wife," said Clyburn, who has served as the U.S. representative for South Carolina's 6th congressional district since 1993.

The nearby 93-ft.-long pedestrian bridge over Chestnut Street was renamed the Dr. Emily England Clyburn Pedestrian Bridge in 2018.

Rep. Clyburn is currently the third ranking House Democrat and serves as the party's Majority Whip

"To improve this entire area is something that needs to be done," he added. "It will change the attitude of the [South Carolina State University] students who come here every day. I know how uplifting it is to me personally to have the ambiance of a place looking right."

The project includes improvements to the U.S. Highway 21/178 Bypass (Chestnut Street) corridor near the entrance to SCSU, the state's only public, historically black college and university (HCBU).

The Orangeburg Times and Democrat reported that, once completed, the construction will include rehabilitated sidewalks, stamped crosswalks, landscaped and fenced medians, a shared-use path from Goff Avenue to Bellville Road, retrofitted stairs to the SCSU pedestrian overpass and black, powder-coated mast arms and pedestrian equipment at the intersections of U.S. Highway 601, Goff Avenue and Wilkinson Boulevard.

"This project would not move forward without the many partners who worked tirelessly to identify and commit the necessary funding — a total of $12 million — to bring this project to fruition," SCDOT Deputy Secretary for Engineering Leland Colvin told the Orangeburg news source.

But, he said, it was Clyburn who was instrumental in getting funding earmarked for the project from Washington, D.C.

"We would not be here without the funding secured at the federal level that accounts for over 80 percent of the total project funding for the improvements on Chestnut Street that we are getting ready to start with," Colvin noted. "I would also like to thank Orangeburg County and the Lower Savannah Council of Governments for their contributions to complete the funding package."

Just after the groundbreaking, the Orangeburg County Council presented a check for $1.3 million to the improvement effort, the Times and Democrat reported.

"This is a project that is very well needed, and the money has just been sitting there for over 20 years," Clyburn told the group assembled for the ceremonial beginning of the construction. "It can be used for this purpose, and it fit very neatly into the [SCDOT's] goals for the entire region.

"It started with the pedestrian overpass," he continued. "I expect by this time next year, the stuff at the Railroad Corner will be up and going. It takes some time to do the planning, but once it breaks, things seem to fall into place."

Alex Bennett, a graduate of SCSU, will serve as the transportation department's project engineer on the improvement of the U.S. 178/U.S. 21 corridor.

He said the project will promote safety for pedestrian and bike traffic and provide a separation between them and the roadway traffic.

"It's a humbling experience, coming back 10 years after graduation and not having any idea I would be serving in this role," Bennett explained. "It feels good to come back full circle and provide a benefit to the campus, as well as the city and county of Orangeburg."

Construction should begin sometime this summer and be completed in the fourth quarter of 2023, he told the Orangeburg newspaper, a total of about 18 months.