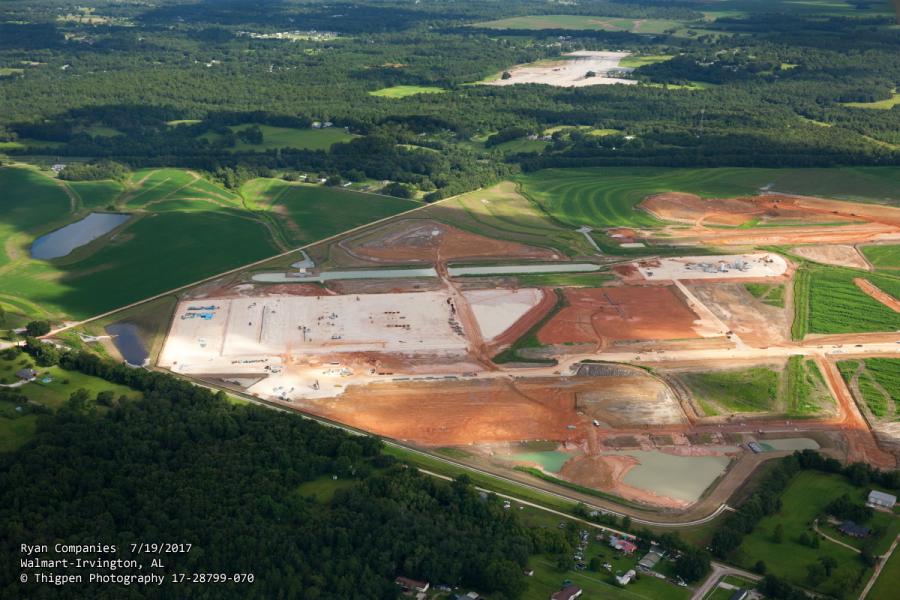 Walmart expects the distribution center to increase traffic at the Port of Mobile by approximately 10 percent.

Work is under way on a $135 million Walmart distribution center in Mobile, Ala. Crews have been moving dirt to make way for construction of the more than 2.5 million sq. ft. facility, which will be Walmart's fourth distribution hub in the state.

“Right now, they're in the process of doing dirt work. They have not 'gone vertical' yet,” said David Rodgers, senior project manager of the Mobile Area Chamber of Commerce. Ground was broken March 1 and the facility is scheduled to open May 1 of next year.

Minneapolis-based Ryan Companies is the lead contractor for the storage and cross-dock facility, which will be located near exit 10 on Interstate 10. Garin Frandle, project manager of Ryan, said construction crews are using Caterpillar D-6 bulldozers to move dirt, along with John Deere scrapers and excavators with long-haul dump-trucks.

Frandle added that cranes will be used to put the tilt panel walls in place once concrete has been poured. The cranes will erect the steel panels, which are each about 45 ft. tall and typically 25 to 27 ft. wide, and weigh around 120,000 lbs.

The project consists of a 2.5 million sq. ft. warehouse, a 100,000-sq. ft. crossdock, plus ancillary buildings including a guard house and a pump house. Besides the buildings, construction includes 3.5 million sq. ft. of paving. Five large ponds, occupying 19 acres, have been added for drainage and stormwater runoff. A portion of the 400-acre site will remain undisturbed.

The center will supply several of Walmart's regional distribution centers around the United States. Rodgers said his office and Ryan Companies estimate more than 1,000 construction jobs will be created throughout the duration of the project.

“Throughout the construction, we'll ramp up and eventually peak about 300 to 400 folks working,” said Frandle. “That will probably be around September or October when the majority of the trades are on site. Right now, we have about 125 or so people checking in each day. Different people will come and go as they begin and finish their parts.”

The Alabama Department of Transportation has made plans to widen lanes of Interstate 10 to assist with the anticipated increase in traffic in the area around the distribution center. “We're awaiting funding,” said Don Powell, the department's southwest region operations engineer. Powell added that a bridge near the facility is currently under repair, but that work is unrelated to the Walmart hub and should be completed well before the opening. An access road to the facility is already in place and there has been work on a nearby county road, both in connection to construction of the distribution center

Walmart expects the distribution center to increase traffic at the Port of Mobile by approximately 10 percent. Local economic development officials said the project is likely to result in more construction projects near the port and center.