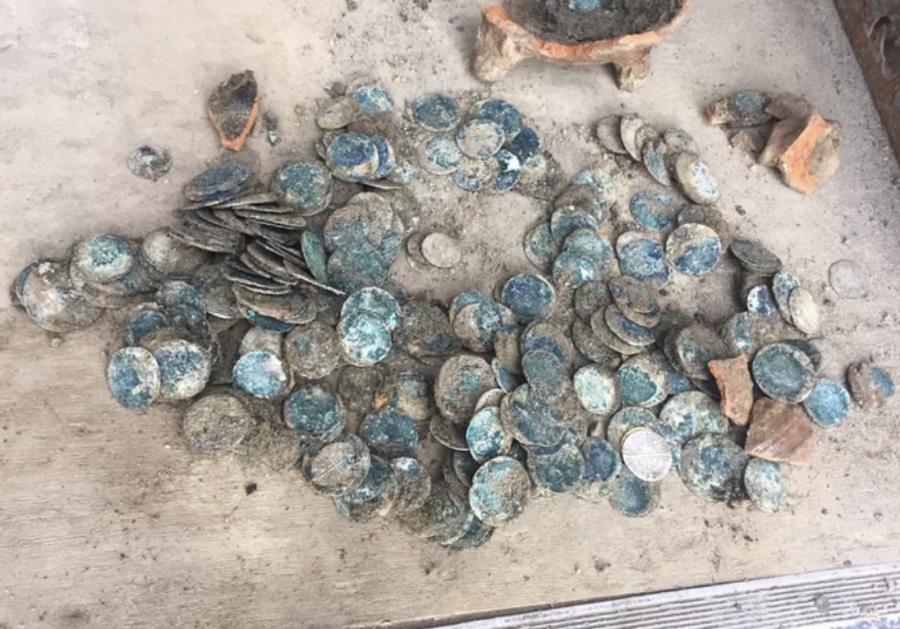 A crew from Oasen, a drinking-water company, was working on a project in the new town of Hoef en Haag, when they discovered a glazed, earthenware pot of gold containing 500 coins. (Photo Credit: Oasen)

Utility workers in the Netherlands found a valuable surprise when laying pipes March 1.

A crew from Oasen, a drinking-water company, was working on a project in the new town of Hoef en Haag, when they discovered a glazed, earthenware pot of gold containing 500 coins, including 12 gold and 488 silver, from the 15th century, Live Science reported. The crew immediately called the province of Utrecht's archaeological hotline. Archaeologists then arrived to look at the area and retrieve the artifacts.

Most of the coins are from the 1470s and 1480s. Some have depictions of King Henry VI of England, Pope Paul II and David of Burgundy, who also served as bishop of Utrecht, Live Science reported.

In addition to the coins, the cooking pot also held textiles, which Peter de Boer, an archaeologist from Omgevingsdienst Regio Utrecht, said could have been moneybags.

“Every coin in this treasure is a story in precious metal,” said de Boer. “Every gentleman gave out his 'business card' by way of a coin, and therefore, there is a lot to discover.”

What's more, the coins may provide insight into the fate of Hagestein, a medieval city that fell in a siege in 1405, de Boer said, as well as into the Burgundian Netherlands, Live Science reported.

The coins are currently in the process of being appraised, and will eventually find their way back to their new owners, Oasen and those who own the land where they were found, Dutch broadcasting station NOS said.