The soaring, white transportation hub opening at the World Trade Center was designed to evoke a bird in flight, but it is hatching under a cloud. 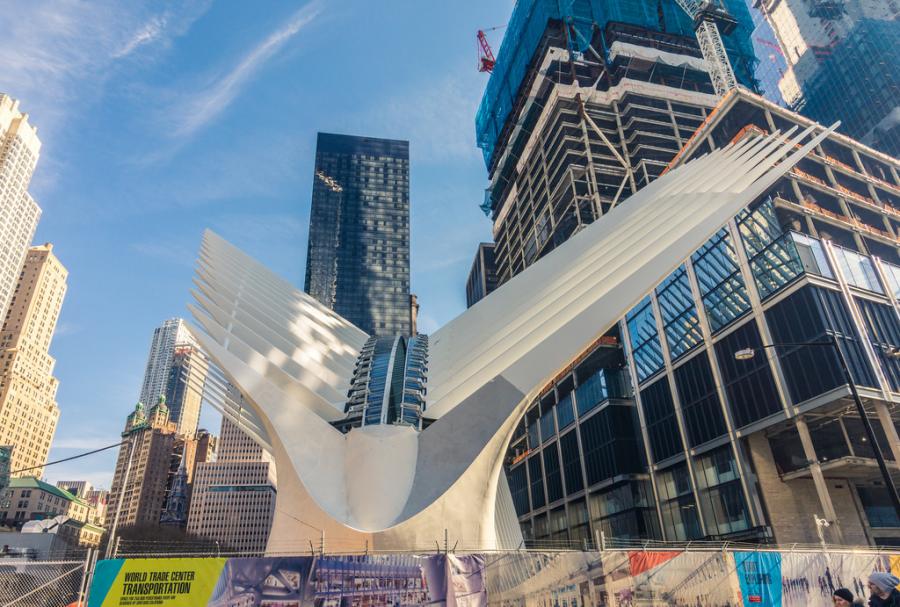 Image courtesy of JJBers via Wikipedia. The soaring, white transportation hub opening at the World Trade Center was designed to evoke a bird in flight, but it is hatching under a cloud.

NEW YORK (AP) The soaring, white transportation hub opening at the World Trade Center was designed to evoke a bird in flight, but it is hatching under a cloud.

There will be no ribbon-cutting celebration when the train station's grand hall, called the Oculus, opens because the head of the bistate agency that controls the hub has blasted it as a “symbol of excess,” with runaway costs approaching $4 billion.

That's roughly the same price as the nation's tallest skyscraper, next door — the 104-story One World Trade Center.

“The cost of projects, big and small, matters — a lot,” Patrick Foye, executive director of the Port Authority of New York and New Jersey, said in a statement through a spokesman. “Whether due to unforeseen conditions, errors or misconduct, cost overruns consume precious resources and undermine public confidence.”

Ribbon cutting or not, the hub, which includes a commuter rail station, retail shops and connections to several subway lines, appears destined to take its place among the city's most talked-about landmarks.

Intended to serve partly as a monument to the victims of the Sept. 11 attacks, the hub was designed by Spanish-born architect Santiago Calatrava to convey the feeling of a bird released into the air, with steel wings poised for takeoff. Some critics have compared it to a dinosaur skeleton or an armadillo.

Adjacent skyscrapers can be seen through the bird's curved white ribs, which enclose a vaulted, cathedral-like space.

The station is replacing one that served PATH trains to and from New Jersey and that was destroyed along with the twin towers in 2001. Though some parts of the hub are still under construction, PATH trains will ultimately be connected to 11 New York City subway lines, as well as ferries. Shops and restaurants scheduled to open this summer will give tourists and commuters a reason to linger.

“I think of the person who comes to New York commuting, lives in a very modest apartment somewhere in New Jersey, comes here and has to go to work maybe in a cellar and do a very simple work,” Calatrava said. “In this minute that I am here, I can at least enjoy a place in which somebody is saying, 'You are an important guy.'”

Steve Plate, the chief of major capital projects for the Port Authority, called the hub “the eighth wonder of the world” and described how the building “is aligned precisely to allow the sun to come in exactly in that opening on Sept. 11 at 10:28, when the last tower fell, to capture that light and remember that moment.”

When Calatrava's design for the transportation hub was announced in 2004, it was budgeted at $2 billion, and then-New York Gov. George Pataki said it would be finished by 2009.

The Port Authority puts the current cost at $3.9 billion because of overruns and delays blamed on factors including the architect's exacting demands and the complexity of building the hub while the Sept. 11 museum and new office towers were also under construction.

In a marvel of engineering, the new complex was built around, beneath and above an existing, still-operating subway line. That line, the No. 1 train, now passes through the new hub on a 200-ft. (61 m)-long bridge that lacks any support columns. The decision to keep the subway line intact was partly responsible for the huge cost.

Calatrava, best known for train stations in European cities including Lisbon and Zurich, has complained of being unfairly blamed for cost overruns at the trade center, telling The Wall Street Journal last May, “I have been treated like a dog.”

“We had an obligation to do something very special,” he said. “We did it very wisely, very prudently, very intensely to make sure we got the best product, the best quality and the most historic structure. We feel very strongly that the mission has been accomplished.”