Wrigley Field Renovations Bring the Past Into the Future

The need for a full-scale renovation of Wrigley Field was necessary for its preservation. 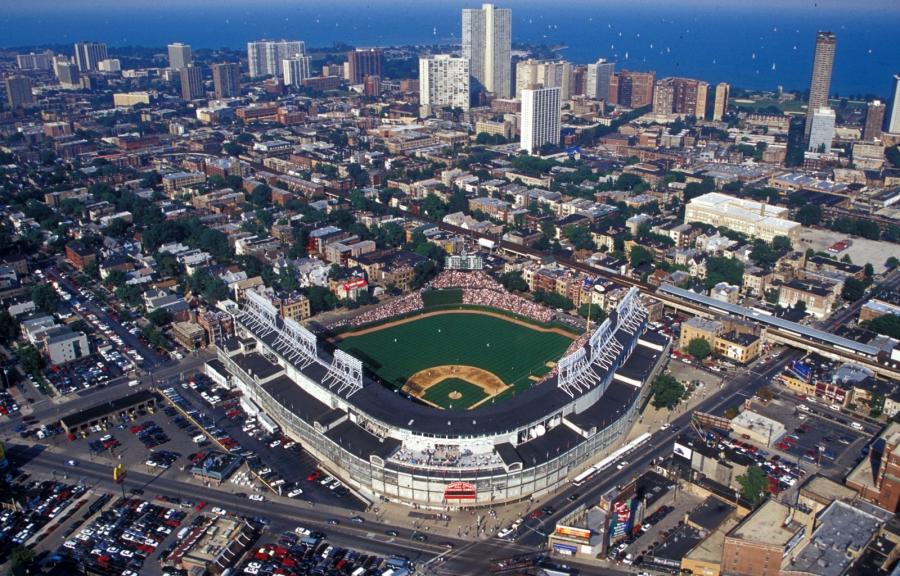 The neighborhood where the stadium is located, dubbed “Wrigleyville” by locals and tourists, transforms into a full-on Cubbie carnival on game days in the summertime.

Standing majestically at 1060 West Addison Street on Chicago's windy north side is where you'll find Wrigley Field – in the same exact place it has always been since 1914. Its age lands “The Friendly Confines” among the top five oldest American sports venues still in use today, however with Fenway Park having opened in 1912, the home of the Cubs is for the time being firmly cemented as Major League Baseball's second-oldest park. Both stadiums have been designated historic landmark status and renovated extensively, although Wrigley's most recent update has it poised to remain baseball's jewel for decades to come.

On the cusp of the Cubs announcing an ambitious five-year, multi-phased overhaul of Wrigley Field in 2013, team owner Tom Ricketts first revealed the priorities of his ownership group, which acquired the club in 2009. They were simple: Win a World Series championship (which the Cubs finally accomplished for the first time in 107 years in 2016), preserve their legendary ballpark and be good neighbors to the surrounding community.

The neighborhood where the stadium is located, dubbed “Wrigleyville” by locals and tourists, transforms into a full-on Cubbie carnival on game days in the summertime. For a long period, seats affixed to the roofs of overlooking buildings on Sheffield and Waveland avenues provided fans with a once in a lifetime viewing experience – for free, no less. It was all part of the whimsical nontraditional traditions that make the Cubs … well, the Cubs. A gentleman's agreement between the various property owners and the team permitted the buildings seats to remain until greed ultimately won out.

While the buildings were largely residential when seats were first added, by the turn of the century many had changed hands and morphed into business properties. The Cubs took issue with these new owners charging admission to their seats, and in 2004 the two parties reached a revenue sharing agreement that stipulated that these alternate venues give the team 17 percent of their gross. The deal worked for a time, however the Ricketts family had other ideas after buying the Cubs. After applying a little pressure, the family eventually bought up a majority of these structures. As for the ones they didn't, well, they wouldn't have such a pristine view of Wrigley for much longer.

The need for a full-scale renovation of Wrigley Field was necessary for its preservation, but the Ricketts also managed to transform their historic park in a way that obstructed the views of these freeloaders with state-of-the-art technology. Wrigley, known so much for its old-school charm that it didn't install proper lighting until the '80s, finally put up a 2,400-sq.-ft. electronic scoreboard in the outfield as part of the Ricketts's $575 million 1060 Project. Bleachers, a characteristic of Wrigley as iconic as its ivy, were also extended further to expand the stadium's capacity by 600.

Prior to the four-phase 1060 Project, the Friendly Confines were quite confining. The Cubs' locker room was a paltry 11,000 sq. ft. So Ricketts dug out an area just west of the field and constructed a new 30,000-sq.-ft. clubhouse complete with a player's lounge, rooms for medical staff, a weight room and offices. The previous clubhouse became an underground batting cage and the team's dugout was expanded. Additionally, both the home and away bullpens were relocated to an area underneath Wrigley's bleachers.

Getting one over on the rooftop owners was a bonus of the renovation for the Ricketts family, although to be fair the project was launched with one goal in mind: Maintaining Wrigley Field for the enjoyment of future Cubs fans. With its structural improvements and modern additions – set for completion in 2019 after an additional year was added – the timetable for Wrigley's eventual demolition not only was pushed back indefinitely, it now seems like a far-fetched idea to think that this stadium will ever be razed.