On Holy Ground: How Wrigley Field Got Built

In the years before baseball, the old seminary was converted into residences but soon attracted interest from a minor league looking to build a new Windy City ballpark. 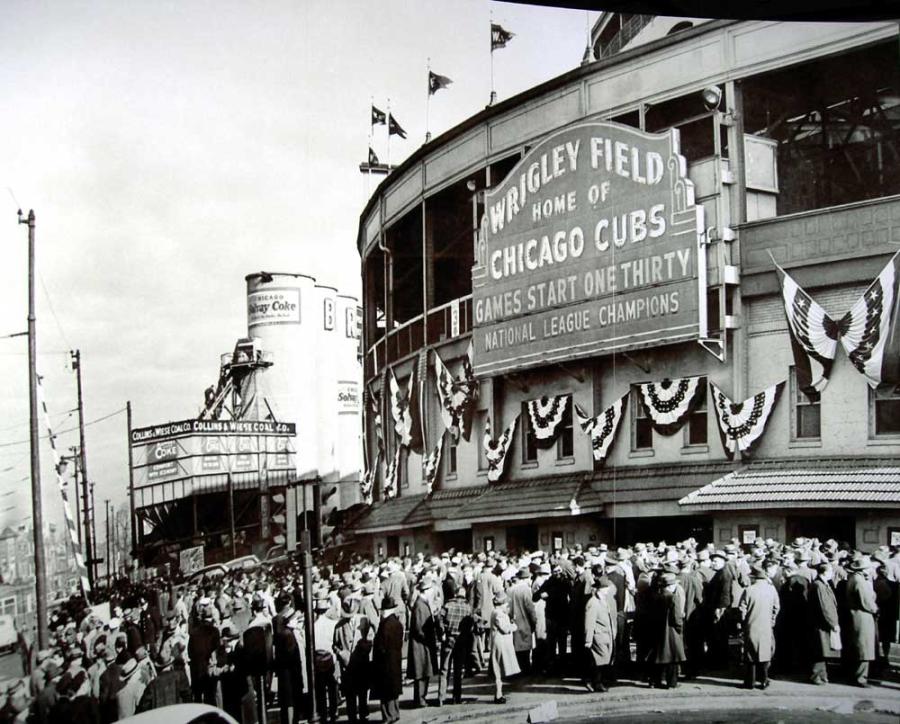 A new dawn began for the Cubs with the investment of chewing gum magnate William Wrigley, who eventually would go on to take over the team from Weeghman.

Although it later became widely known for housing one of the most endearingly unblessed franchises in professional sports, Wrigley Field's roots were planted on the site of a former seminary, of all places. Despite laying down bricks on the same land once walked by members of the clergy, divine intervention was uncommon on Chicago's North Side as the Cubs went 108 years between World Series titles before finally exercising their championship demons in 2016.

At the turn of the 20th century, the neighborhood now known as "Wrigleyville" was primarily called Lake View and on the corner of Clark and Addison streets stood the Chicago Lutheran Seminary, until the property was sold to an investor group in 1909. In the years before baseball, the old seminary was converted into residences but soon attracted interest from a minor league looking to build a new Windy City ballpark.

The infancies of our four major professional sports leagues saw them all battle and eventually overcome more small-time competing entities, with the Federal League being an early challenger of Major League Baseball. Charles Weeghman – known as "Lucky Charlie" for his success in the local lunch counter business – purchased the team that he would later christen the Chicago Whales in 1913 and vowed to build them a new place to play. Coveting the spacious locale of the seminary site and its close proximity to Chicago's elevated train.

In 1914, Weeghman agreed to a 99-year lease with the landowners at a cost of $16,000 per year and got to work on constructing his stadium. Among the document's many stipulations included a clause that Weeghman not exceed $70,000 in improvements to the grounds, a requirement that he completely ignored. Wanting to rival New York's famed Polo Grounds, Weeghman hired Zachary Taylor Davis to design his new ballpark. Davis, the architect behind Chicago's other field, Comiskey Park, recommended concrete and steel for the foundation.

Construction on what would first be called Weeghman Park began in February 1914, just two months before the Whales season opener. Even with the tight deadline and razor thin margin for error, the stadium was ready for baseball come April. Not even a brief workers' strike could derail the project. In spending a reported total of $250,000 (roughly $6.1 million in 2017 dollars) on the stadium, Weeghman far exceeded his budgetary guidelines in creating this modern marvel with an initial seating capacity of 14,000.

Many of the seminary buildings remained intact during the Whales' first season in their new park, which posed a problem early on when Weeghman determined that it was too easy to hit a home run. The left field wall was pushed back 25 ft., but in order to do so the team needed to remove the front porch from one neighboring structure first. The squad on the field was competitive, but the Federal League was hemorrhaging money. After folding in 1915, Weeghman bought the MLB's Chicago Cubs and merged them with his Whales.

A new dawn began for the Cubs with the investment of chewing gum magnate William Wrigley, who eventually would go on to take over the team from Weeghman. "Cubs Park" underwent major renovations from 1922 to 1923, and with the help from Davis, the original architect, Wrigley Field was born. This work increased the stadium's capacity to just over 30,000, however, the park wouldn't add its world famous green ivy and bleacher seats until 1937.

In keeping with its old-school tradition, Wrigley Field did not host night baseball games until lights were first installed in 1988. Quirks like this helped build the reputation of "The Friendly Confines" as one of the most historic parks in the game. It remains the second-oldest stadium in Major League Baseball and is counted among the top five oldest sports arenas still in use to this day. And for good reason – if you haven't caught a game at Wrigley, put that on your bucket list immediately!