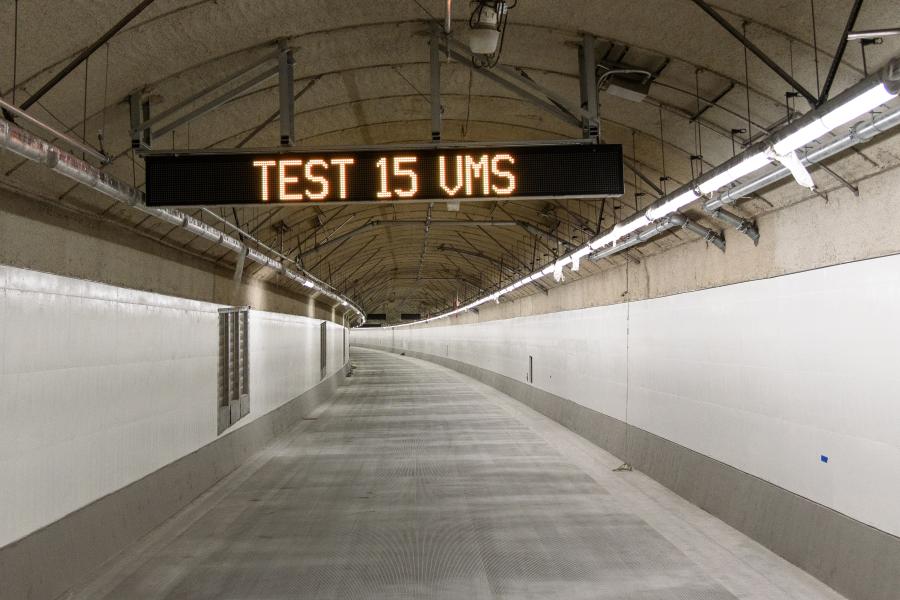 Contractor Seattle Tunnel Partners must install and test thousands of components and 90 interconnected systems that are needed to safely operate the SR 99 tunnel. (WSDOT photo)

Getting the tunnel ready for drivers is a big task. Contractor Seattle Tunnel Partners must install and test thousands of components and 90 interconnected systems that are needed to safely operate the SR 99 tunnel.

Systems work began in March after crews completed the roadway inside the tunnel. STP is now conducting multi-layered tests of the tunnel's operational and safety systems. Pre-functional tests ensure that each piece of individual equipment works (a sprinkler head). Functional tests check that the equipment works together as a system (multiple sprinklers). Finally, integrated testing checks that multiple systems function together (heat detectors and video cameras that work with the fire suppression system).

STP has completed many of these tests, including testing the sprinkler system, but has more critical work to go.

STP recently submitted its latest construction schedule showing they could complete their work by late September. But because so much critical testing remains, WSDOT cannot verify this schedule.

In the meantime, other contractors will move Alaskan Way out from under the viaduct and complete preliminary work to connect ramps and roads to the tunnel at both ends. Once the tunnel is complete and systems function as designed, SR 99 through Seattle will close for about three weeks to realign SR 99 into the new tunnel.

The goal is to safely open the tunnel to traffic as soon as possible and begin removing the Alaskan Way Viaduct, but systems testing must advance before any dates for closing SR 99 or opening the tunnel can be determined.

WSDOT recognizes closing SR 99 will affect traffic around the region and we are working with the city of Seattle, Port of Seattle, King County and Sound Transit to help keep people and goods moving. WSDOT will provide about a month's notice prior to closing SR 99 and will need everyone's help to keep traffic moving. WSDOT is encouraging people to start thinking about travel alternatives and make a plan for getting around when SR 99 is closed.