The Capitol Square Project includes both the state capitol itself and the nearby Herschler Building, which houses state offices. 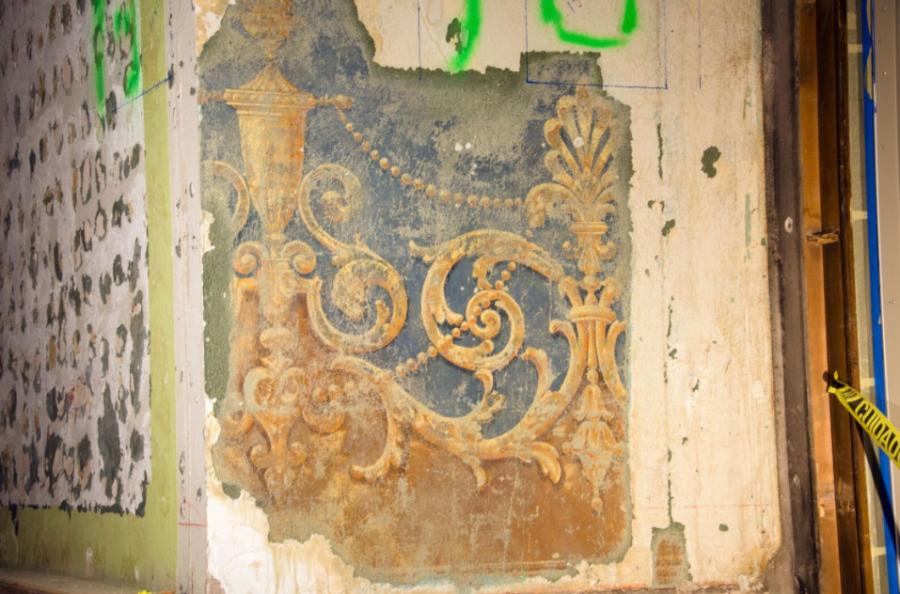 Historic paint studies have revealed extensive decorative paint patterns in the historic Wyoming Territorial House Chamber. The project team is investigating the costs to restore the 1888 pattern in this chamber, as well as in other portions of the 1888 section of the building. (Photo Credit: Rachel Girt)

The Wyoming capitol's $300 million restoration project is on pace to be completed by 2019, and state workers could start moving into a completed portion of the complex by this spring, according to Suzanne Norton, project manager with the state's Construction Management Division.

The Capitol Square Project includes both the state capitol itself and the nearby Herschler Building, which houses state offices. Planning began in 2003, and work started in 2014.

Norton said that construction was about 40 percent complete and that the east wing of the Herschler Building would be ready for employees to move in by March.

The new exterior walls of the Herschler Building, intended to better protect against rain and bad weather, will be installed within the next three months.

“While it doesn't have the finished appearance quite yet, it's getting close,” Norton said.

Once the wall panels are hung, the stone facing will be attached.

Last March, workers announced the discovery of several historical gems inside the capitol, including a playbill advertising an 1887 product at the Cheyenne Opera House and brass panels from an antique elevator.

Add to that the uncovering of a beautiful historic paint job beneath layers of new paint and plaster in the Territorial House chamber, where Wyoming's constitution was signed, which will be restored as part of the renovation.

“You wouldn't believe that some of the people working on the project would have the skill to say, 'Oh there's something behind the wall covering,'” Norton said. “They're able to just peel — I don't know how they do it — but they take the layers and layers of material that were covering up this historic paint and expose it and it's beautiful.”

She said that an allowance for restoring items of historic significance was included in the original budget so the recent discoveries don't affect the overall cost of the renovation.

Progress has been made on more crucial aspects of the renovation as well.

The underground Central Utility Plant, a decidedly unexciting but essential aspect of the project, is in the final stages of construction. The plant will provide hot and cold water to the complex.

Other utility-related items have also been installed, including upgrades to the mechanical and plumbing systems in the Herschler Building.

Scaffolding was installed over the capitol's dome in September to repair punctures and tears, largely caused by hail over the last 129 years, and the decorative sheet metal will be replaced.

The renovation has been the source of some controversy and litigation, with former Rep. Gerald Gay, R-Casper, unsuccessfully attempting to sue state officials for mismanaging public funds earmarked for the capitol. The Wyoming Supreme Court ruled that Gay did not have standing to sue.

Another lawsuit over who had authority to sign-off on the capital improvements, filed by state treasurer and possible gubernatorial candidate Mark Gordon, is being heard by the Supreme Court this week.

The 2019 completion date for the project will come after the Legislature meets that year but Norton said that lawmakers will likely begin using the building for committee meetings and other activities in advance of the 2020 session. The Legislature is currently using the Jonah Business Center in Cheyenne.