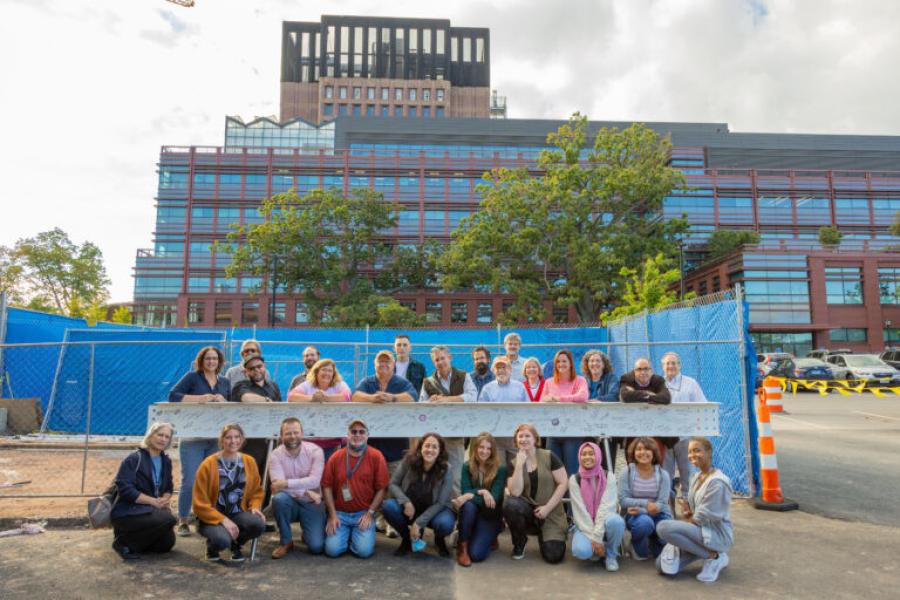 Staff, curators and project partners were invited to sign their name, leave a message in cuneiform, and/or draw a dinosaur on the final steel beam of the Peabody addition. (Yale Peabody Museum of Natural History photo)

A huge $160 million project is under way at Yale University in New Haven, Conn., as the college's world-renowned Peabody Museum of Natural History is getting its first makeover in 90 years.

Founded in 1866, the museum helped introduce the world to dinosaurs in the 19th century and is today one of the world's oldest and largest university museums of its kind.

Home to more than 14 million objects and specimens across 10 distinct collections, it preserves and displays more than four billion years of Earth and human history.

When it reopens its galleries in 2024, the renovated Peabody will feature a new K-12 Education Center with dedicated classrooms for local schoolchildren, a light-filled Central Gallery designed to host outreach events year-round and a new outdoor courtyard space for community gatherings.

And, of course, there will be dinosaurs.

Alongside a wealth of newly displayed fossil material, the first brontosaurus, stegosaurus and triceratops specimens ever discovered will stand beneath Rudolph Zallinger's celebrated "The Age of Reptiles" mural in the redesigned Great Hall of Dinosaurs.

Yale's brontosaurus, in fact, was the first ever discovered. O.C. Marsh, the famed Yale paleontologist, and his team announced in 1879 that they had found the dinosaur bones in Wyoming. Marsh named the newly discovered species Brontosaurus excelsus.

In all, the museum's total gallery space will expand by more than 50 percent.

The renovation is due to several significant contributions from local and national donors, including a landmark $160 million gift in 2018 from Edward P. Bass, Class of 1968. Fundraising for the project is ongoing.

In November, the Peabody announced that it will offer free admission in perpetuity once the facility is again open to visitors.

The museum, which continues to operate many of its programs online, will join the Yale University Art Gallery and the Yale Center for British Art as free public admission museums.

"This has been part of the plan from the beginning and donors to the Peabody made this possible," said David Skelly, the natural history museum's director. "I am deeply grateful to all of them for their leadership in helping us realize a vision for the museum's future."

The Peabody has long served as a gateway to science for the Greater New Haven community, hosting exhibitions and public programs that connect tens of thousands of visitors each year with the latest research occurring at Yale and around the world.

Dinosaurs to Be Joined by New Exhibits

After first breaking ground in 2020, the pace of construction is currently moving full speed ahead, Skelly said.

"The Peabody Museum has been sitting on this corner in New Haven since 1925," he noted. "We're taking the whole building back to the bricks, and then we're adding on more exhibition space."

The additions will include many new exhibits, he added, such as separate galleries on the history of science, on Native American peoples, and Pacific cultures, Skelly said.

"We're going to be able to share our collections way more with the community, and that is super exciting," explained Mariana DiGiacomo, a natural history conservator at the Peabody.

With major construction under way, though, extra care needs to be taken with all the items in the museum.

"We have to be very careful with the millions and millions of objects that were sitting in this building, [and] they all had to get moved out of the way," Skelly told Hartford's NBCLX TV affiliate.

However, it is a different story with the colossal dinosaur bones.

"We have three fossil skeletons," DiGiacomo explained. "One of them is attached to the wall, and the other two are too big to move out."

Those fossils are being sheltered in place, including the skeleton of a large Edmontosaurus, a duck-billed species.

Eleven dioramas also are being protected with temperature control and filtered air.

The two famous murals on display at the museum painted by Zallinger, a 20th century artist, have long been major attractions to the Peabody and cannot be moved during the reconstruction. Besides his recognizable "The Age of Reptiles," is another entitled "The Age of Mammals."

"We are standing right next to the T-Rex that is painted on this amazing mural," DiGiacomo said to a reporter from NBCLX. "We are doing everything in our power and even beyond to keep it in good shape during construction."

Preserving a piece of art that was finished back in 1947, though, requires daily walk-throughs.

"We are looking at all of the images in this mural and making sure that everything is where it's supposed to be," she explained. "Some things are harder than others. For example, when there is any demolition happening, there's vibration. And so, we're constantly monitoring those vibrations to make sure that we're keeping it in place."

"It's things like the double arches," said Tim White, director of collections and research, at the museum. "That is a signature part of the Peabody lobby. We started to uncover these arches that had been covered up for the last 50 or 60 years."

A Renovated Peabody Something to Take Pride In

On Dec. 2, staff, curators and project partners were invited to sign their name, leave a message in ancient cuneiform, and/or draw a dinosaur on the final steel beam of the Peabody addition. The crew from the project's builder, Turner Construction, and the Ironworkers of Local 424 teamed up to secure the beam in place.

In early 2024, when people drive past the Peabody following its renovation, DiGiacomo said they will see an enormous dinosaur fossil framed in the window — one of the highlights of the museum's transformation.

"People are going to return to see some old friends, but in a new light," she told the Hartford station.

Added Skelly, "We hope that what we offer is going to be a fantastic experience, so people can better understand the world around them." 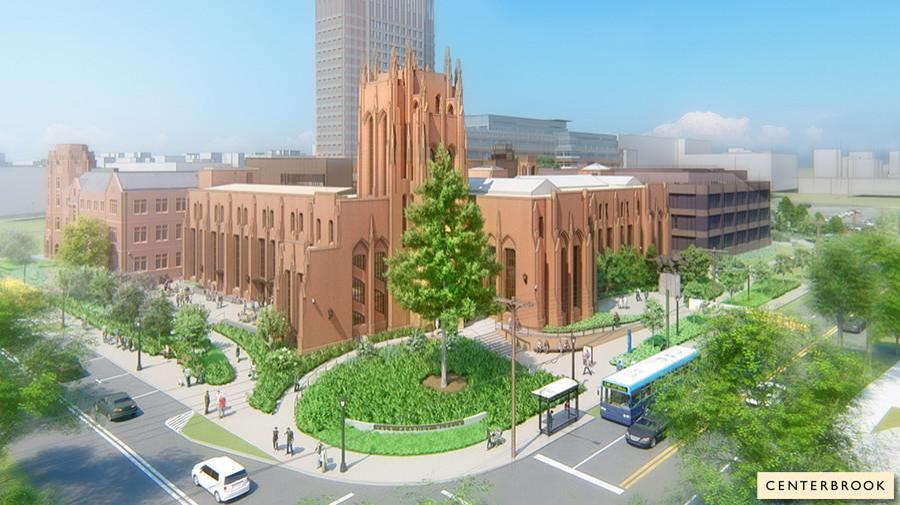