From there the new road will continue north toward Two Mile Drive, where the bypass will run under a new bridge. 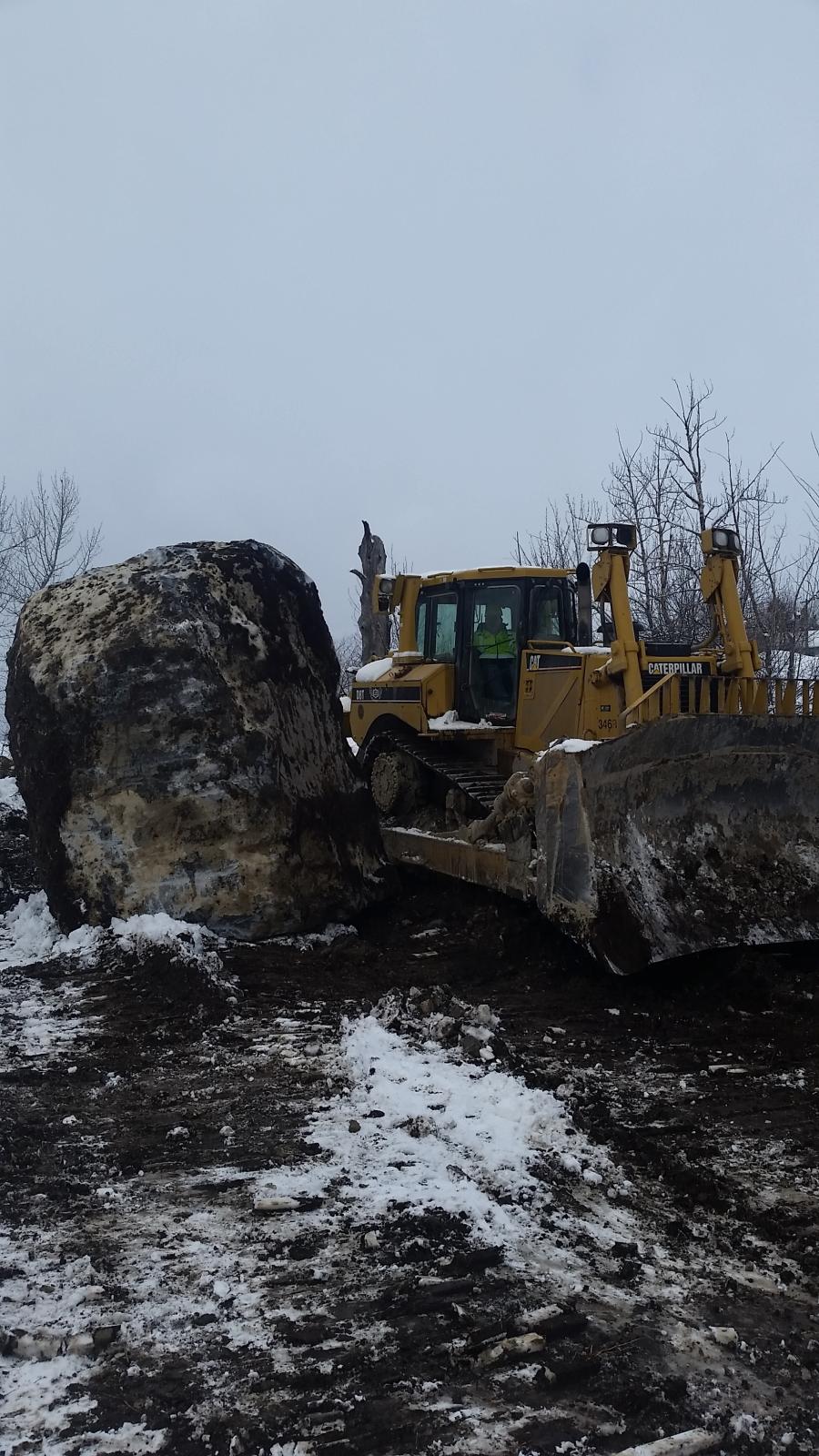 Grading on the Kalispell Bypass, U.S. 93 Alternate Route, has been completed, but there’s a lot of work still to do, including some bridge and resurfacing work.

Grading on the Kalispell Bypass, U.S. 93 Alternate Route, has been completed, but there's a lot of work still to do, including some bridge and resurfacing work.

From U.S. 93 south of town, south of the “Four Corners” junction, along the abandoned Burlington Northern Railroad, across U.S. 2 and Two Mile Drive, Three Mile Drive and Four Mile Drive and back to U.S. 93 north of town, crews are constructing a new four-lane road around the town of Kalispell, Mont.

“It will help traffic flow,” he continued. “Easing congestion, it will be safe and efficient for traffic.”

Highway 93 is the main connector between Mexico and Canada, with heavy truck traffic. Building the bypass gets the trucks out of downtown, where there is concern about hazardous materials being transported. Current traffic estimates average about 40,000 vehicles traveling through the main intersection every day. Projected numbers on the bypass by 2030 are also 40,000.

The concept for the project to relieve congestion in downtown Kalispell was developed in the early 1990s, Mitchell recalled. The Kalispell Transportation Plan and Bypass Feasibility Study in 1993 recommended a westside route as the preferred alternative.

Community input in August 2004 led to revisions of the proposed alignment that placed the route slightly west of the original railroad route with a bridge over it to link it to U.S. 93. An Environmental Impact Statement was published in 1994, granting approval of the plans. Corridor design began in 1995.

“We bought the first property in 1996,” Mitchell said.

Right-of-way acquisition, design and modifications for six interim projects along U.S. 93, including preliminary design for corridor preservation, got underway. ROW acquisition wasn't completed until 2015, shortly before construction was scheduled to begin.

In 2008 the project design was changed to staged construction and divided into multiple construction segments in order to build as funding allowed. The segments from U.S. 2 south to U.S. 93 and Reserve Loop to U.S. 93 were chosen as the first to be constructed, with work on an interim two-lane bypass between U.S. 93 and U.S. 2 beginning in 2010. This also included two lanes of the future four-lane road.

General contractor LHC Inc. of Kalispell has been working 12-hour days, five days a week with intermittent Saturdays. Crews even worked throughout the winter with no shutdown.

“We have a pretty aggressive contract timeline set up to encourage them to get in there and get it done. There's limited time in the contract,” Mitchell explained. “Only 220 working days to get the job done.”

The typical standard liquidated damages will apply if they're late.

Development was ready to move forward in May, but was delayed due to the fight in Congress regarding how to pay for the nation's multibillion-dollar infrastructure needs. Last-minute Congressional approval of an $8 billion extension of federal transportation funding allowed this final project to get under way.

Over $100 million has already been spent on the project, with the final contract of nearly $34 million, the largest single contract in the state's history. Most of the funding is federal, Mitchell noted, “with the required match.” Surprisingly, bids came in under the estimate, which helped the budget.

“A lot of the job is waste — hauling off dirt,” Mitchell said. “They can haul all winter, especially when the winter is so mild.”

One million cu. yds. (764,555 cu m) of excavation needed to be moved; the majority of dirt was expected to be moved in the winter.

“Sub-zero weather would hinder the equipment, but we had an extremely mild winter,” Mitchell said.

To speed up the process, the contractor chose to haul it to the 20 acres in the middle of the project offered for dumping dirt.

“We bought a 30-acre property, which will be sold later. It was the contractor's choice of where to dump, but this made for a short haul, which cut the price because they could use the big equipment that isn't legal on the road.”

The goal is to reach completion by July 2017, with traffic on the new road by Nov. 1, 2016, leaving only seal and cover work and some seeding. With 110 workers on site on a typical day (150 in the summer), Mitchell expected them to meet their deadline. “This is the last phase.”

The final segment is the construction of the four-lane bypass between U.S. 2 and Reserve Loop and Four Mile Drive. This construction began in fall 2015 and requires two construction seasons.

Staying on schedule wasn't always assured. Although, being a brand new road with no traffic, crews were unencumbered with passing vehicles, environmental issues threatened to impact the schedule.

“There are stream crossings and a wetland to mitigate,” Mitchell said. “We had to get a lot of permits. There's a lot of regulatory agency oversight and a lot of endangered species in Montana. The migratory bird protection acts affected when we could clear, for example.”

Another challenge was coordinating critical items to complete on time.

Arranging for delivery of 96,000 tons (87,090 t) of plant mix from a local contractor and cement had to be timed right. Using a mix specific to Montana's climate that sees a lot of cold, snow and freeze-thaw cycles, a PG grade S asphalt mix was selected. Although asphalt is mainly used, the intersections are Portland cement, as are curb and gutter, sidewalks and all five bridges, each of which requires 6,540 cu. yds. (5,000 cu m) of concrete to build.

They also require 98-ton (89 t), 113-ft. (34.4 m)-long beams that have to be trucked in from Spokane, Wash., and installed by Sletten Construction, the project's bridge contractor.

Before that could occur, some ground improvement was necessary. Menard, specialty contractor from Pennsylvania, installed stone columns to stabilize the road base under the bridge.

“It took several months to complete, then we had to wait for settlement,” Mitchell said, pointing out the impact on an already tight schedule.

The existing two-lane bypass at Foys Lake Road and the Ashley Creek area is being widened to four lanes and bridge widening is continuing for an overpass above U.S. Highway 2. From Foys Lake Road, the entire north side of the bypass will be four lanes, following Interstate highway standards.

A bridge is being built over Ashley Creek and the Rails to Trails path, and another bridge will span U.S. 2. From there the new road will continue north toward Two Mile Drive, where the bypass will run under a new bridge.

According to the Flathead Beacon, the road will continue to Three Mile Drive, where a bridge is already in place over the future bypass. The road will go to Four Mile Drive and a new bridge will be built over the bypass. Four Mile Drive also will be completed west to Stillwater Road with a flatter grade. The hill will be reduced by 30 ft. (9.1 m). The fifth and final bridge will span Old Reserve Drive near Glacier High School, where the final section of bypass will be connected to current sections.

Mitchell said the original plans called for the four-lane alternate route and bridges on the south end, but MDT decided to build the current setup because it was cost effective and allowed the project to move forward.

A sound barrier will be constructed along the bypass from Three Mile Drive to Parkridge Drive, where the road passes close to a subdivision and the bypass will include on and off ramps.

A pedestrian and bike pathway will trace the entire bypass, similar to the southern portion. Sidewalks will be built along the bypass with a trailhead at Three Mile Drive. All interchanges will be interstate-style, four with structures — “on/off ramps for controlled access,” Mitchell said. Traffic signals are being set up at the new Four Mile Drive and Stillwater Road intersections.

Once the bypass is complete, MDT plans to expand the south portion from two lanes to four lanes from the south entrance at U.S. 93 to Foys Lake Road. The time frame for that project depends on traffic volumes and funding. The roundabouts at Airport Road and Foys Lake Road would also be replaced with bridges.