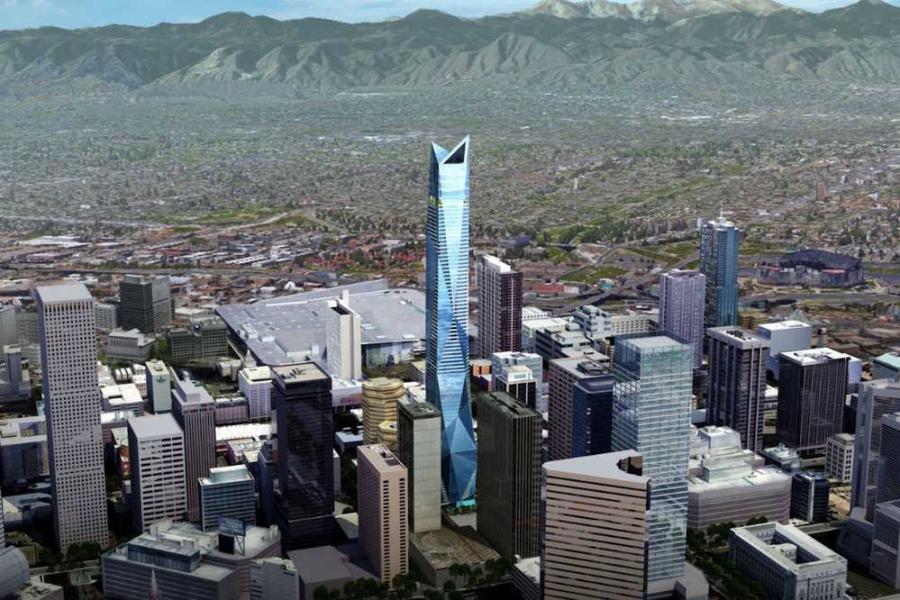 A New York City developer has plans on the drawing board that could dramatically alter the downtown Denver skyline and give the city an icon sure to stand out in this Rocky Mountain plains landscape. (Greenwich Realty Capital photo)

A New York City developer has plans on the drawing board that could dramatically alter the downtown Denver skyline and give the city an icon sure to stand out in this Rocky Mountain plains landscape.

Dubbed for its physical address “650 17th Street: A Transformative Luxury Lifestyle Tower,” the $400 million skyscraper proposed by Greenwich Realty Capital will stand 75 stories tall — at 800-ft., the city's tallest — with more than 1,000,000 sq. ft. of luxury condominiums; a boutique hotel; 22,000 sq. ft. of retail space; and more than 500 parking spaces, according to a 42-page media kit created by Greenwich Realty Capital.

The soaring structure, depicted in renderings as a blue-hued mixed materials design, is being designed by “internationally acclaimed architect” Carlos Ott, an architect from Uruguay, who is working with the New York-based Crown Architecture and Davis Partnership Architects of Denver.

“Greenwich Realty Capital is a New York City-based real estate development and investment firm that focuses on opportunistic real estate investing in major metropolitan areas across the United States,” said Michael Ursini, managing director of Greenwich Realty. “A few years ago, we identified and began working on an opportunity in Denver that we believe has extraordinary potential to generate significant value for both the city and for investors. Set on the axis of Denver's financial district and retail shopping promenade, 650 17th Street is an asset that will help to further catalyze this downtown neighborhood's growth. With this project, Greenwich Realty Capital has set the stage to have a sustainable presence in Denver for years to come.”

Other notable amenities planned for the project include:

The firm has not yet submitted an application to the Denver Community Planning and Development Department for the project, said spokeswoman Andrea Burns, who noted that the agency would prefer not to comment on the proposal at this time.

A story published in the Denver magazine, “5280,” said the firm was in the process of purchasing the 25,000-sq.-ft. lot for which the tower is planned. Ursini told the magazine that he has no time table for the project, but hopes to break ground during the summer of 2018 and “expects construction to last about three years.”

He also noted he has not previously worked in Colorado, and has discovered that, “Everything about this building is more expensive, more time consuming, more difficult, because the eyes of Colorado have never seen something like this. I've never built a building of this magnitude.”

In choosing Denver for the site of the skyscraper, Greenwich considered the impressive list of praise the city has garnered for its livability, growth and job opportunities, as well as its popularity with both locals and tourists.

“Ranked #1 by Forbes as the best place for business and career, and home to a robust and growing technology hub with more than 660 startups plus a new Amazon campus just 20 minutes from downtown, Denver is on a steady upward trajectory,” according to the media kit. “Private-sector employment has increased by 21 percent since 2010; 66 percent of residents hold a Bachelor's or more advanced degree; and the downtown population has tripled since 2000. Nearly 3 million sq. ft. of office space is in the planning stages and the city is wisely investing in making the downtown neighborhood walkable, sustainable, and appealing to its increasingly upscale population.

“Meanwhile, however, new residential condominium and hospitality projects have not kept pace with demand among people seeking a cosmopolitan urban lifestyle in Denver. It is this gap in the marketplace that Greenwich Realty Capital is filling with a project that is both worldly and perfectly tailored to the unique character of Denver.”