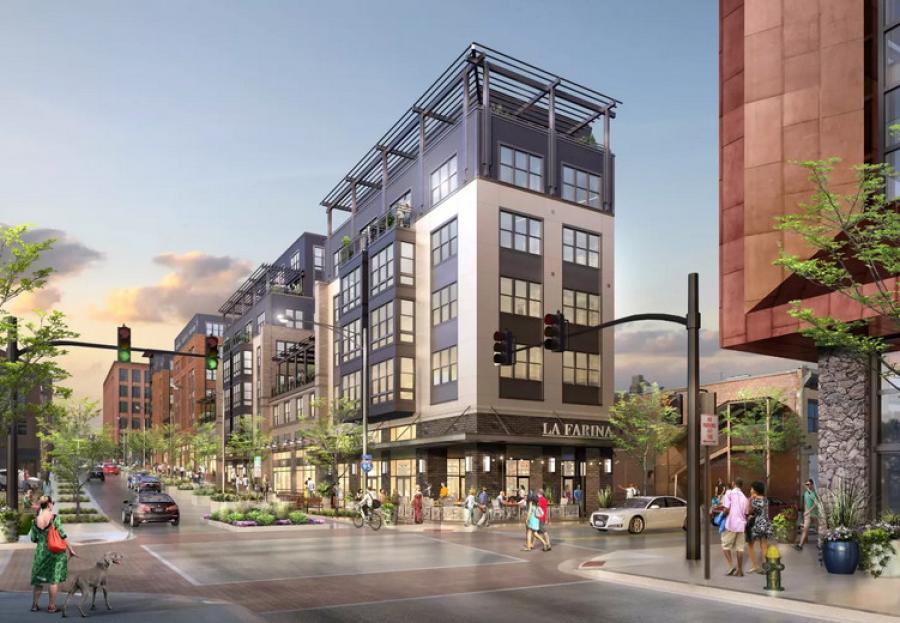 Emblem 125 is a development in the Jewelry District that will include 248 residential units and 22,700 sq. ft. of retail space when it is expected to be completed next summer.

In 2011, an elevated portion of Interstate 195 cutting through Providence, R.I., was relocated, freeing more than 26 acres of former highway property for redevelopment.

In the wake of that effort, the I-195 Redevelopment District Commission, a quasi-public state agency, was created to repurpose the land in the city's Jewelry District and Fox Point neighborhoods. The commission also was tasked with the sale, marketing, and oversight of the former I-195 land.

A decade later, the I-195 commission has already completed several developments in the neighborhoods and officials involved with it say additional projects are planned that will bring different real estate opportunities, including apartment buildings, retail space and grocery stores.

Today, the old interstate's 26 acres of land has been split up into 19 different-sized parcels and 7 acres of open space, according to the commission's website. The agency facilitated four completed projects and currently supervises three projects under construction and another two which are proposed, according to WPRI-TV in Providence.

"We have the opportunity to develop the land once in our lifetime and so we want to get the most value for each parcel, and that doesn't just mean sale price, it means attracting development that brings jobs, enhances the neighborhood and fills a need," Cara Cromwell, a spokesperson of the I-195 Redevelopment District Commission, wrote in an email to the Brown Daily Herald, the student newspaper of Brown University.

In her email, Cromwell told the Herald that the I-195 commission seeks out development that will contribute to its mission and works to ensure other factors are in place to make the surrounding neighborhoods good places to live and work. The planning and development of the Providence district has been strategic and deliberate, she added.

Some Finished, Several Still to Come

Representing more than $600 million of investment, there are more than two million sq. ft. of development completed, under construction or planned, according to Cromwell.

So far, the commission has successfully developed a portion of the land:

Multiple projects currently under construction are expected to be completed in the next year, including a building with 62 residential units, a 13,000-sq.-ft. grocery store and another 10,000-sq.-ft. retail space being developed by Providence's D+P Real Estate and Truth Box Inc. on Wickenden Street. The future occupant of the grocery store cannot be publicly disclosed yet, a source told the Herald.

The college newspaper previously reported that Jewelry District Association President Sharon Steele said that a Trader Joe's supermarket may be coming to Providence, though a spokesperson for the national chain could not confirm that information.

"In terms of construction, things are going smoothly," said Jordan Durham, founder of D+P Real Estate. "We're well out of the ground. We hope to be finished with the project sometime in late summer to early fall next year."

According to the I-195 commission website, the Aloft Hotel, developed by Boston-based CV Properties and Boston Andres Capital, and located adjacent to Point225, is expected to be completed by the end of 2021. In addition, Emblem 125 is a development in the Jewelry District that will include 248 residential units and 22,700 sq. ft. of retail space when it is expected to be completed next summer.

Even as multiple projects remain under construction, flashy planned projects on old I-195 land have garnered attention from residents of the city. They include: